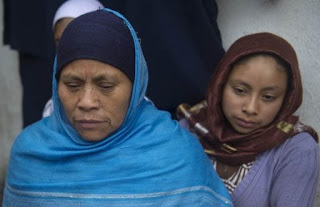 SAN CRISTOBAL DE LAS CASAS, Mexico — Raised a Christian, Manuel Gomez now goes by Mohamed Chechev, and counts himself among a handful of Tzotzil Indians converted to Islam by Spaniards in southern Mexico.
"I am Muslim. I know the truth. I pray five times a day, celebrate Ramadan and have traveled to Mecca," Chechev said in rudimentary Spanish.

He lives in a mainly Protestant community in Chiapas called Nueva Esperanza on the outskirts of San Cristobal de las Casas, where he shares a modest house with 19 relatives and sells vegetables he grows on a plot of land.
Biblical references abound in Nueva Esperanza, with streets named Bethlehem and Damascus and a quarter called Palestine. But it is also home to some 300 Tzotzils, indigenous peoples of Mayan origin, who have converted to Islam and live in harmony with the rest of the population.

According to anthropologist Gaspar Morquecho, the 330,000 Tzotzil people of the Chiapas region have a history of changing religions, after the forced imposition of Catholicism at the height of the Spanish colonization in the 16th century although very few have become Muslims.

In the interior courtyard of the home, Chechev's wife Noora (born Juana) and his daughter-in-law Sharifa (Pascuala) swept and cleaned laundry. They wore long dresses and a veil covered their hair.
Noora is the daughter of a Protestant indigenous leader who was driven out of San Juan Chamula, a nearby town where the Institutional Revolutionary Party and Catholicism reigned supreme, with dozens of other families in 1961.
"In Chamula, not being Catholic or a PRI party member was a crime. They were also angry because Protestants stopped drinking alcohol, one of the main local businesses," said Susana Hernandez, who lives in the neighborhood.

Some indigenous people have been sharply critical of Catholics for identifying too closely with the Institutional Revolutionary Party which ruled Mexico for 70 years.
And Chechev followed in the footsteps of another indigenous leader, Domingo Lopes, who was an official at an Adventist church before converting to Islam, introduced to the region by the Marabutin movement which moved to Mexico from Spain in 1993 in a bid to create a self-sufficient community.

The Marabutin sect is a hangover from the days when Spain was part of the Muslim empire for some seven centuries.
A few steps from Chechev's home is a three-story building housing a madrassa, with a school, workshops and a prayer center run the Murabitun World Movement, a Sufi community founded in 1968 by a Scottish convert to Islam that now has offshoots in many parts of the world.

Mexico is 83 percent Catholic, but Chiapas state, with a population of some 4.5 million inhabitants, has the least numbers of practicing Catholics, according to the 2010 census.
Aurelanio Perez, a Spanish convert known as the Emir Mustafa, founded the Marabutin community in Chiapas and found converts among the Tzotzils.
Chechev speaks the Tzotzil dialect, but can neither read nor write Spanish. And yet, learning prayers in Arabic only took him a couple of months.

"Our prophet Mohammed could neither read nor write. I may not be able to read, but I can recite the holy Koran. It's a miracle to be able to enter Islam. Allah is merciful. He teaches us everything and gives us everything that comes from him," Chechev added.

He knows the prophet's hadith, or collection of accounts of what Mohammed said and did, and says he follows the five pillars of Islam: creed (shahada), daily prayers (salat), fasting during Ramadan (Sawm), charity (zakat) and the pilgrimage to Mecca (hajj).
Chechev traveled to the heart of Islam, in Saudi Arabia, in 1998 with the help of Emir Mustapha. Some of Chechev's relatives, including his wife, also made the trip.
"Aureliano told me that if we accept Allah, we need to visit the house of Allah. It was like a dream, we were all dressed in white. There were white, black, brown people, but it didn't matter. We were all equal," he said.
Noora's face lit up as soon as she heard about Mecca.
"When I went there, I felt proud of Islam, of being a Muslim. We ask Allah for a mosque. Inshallah, if God wishes, it will come," she said.

Noora was hopeful that her son, Ibrahim (Anastacio), will become an imam.