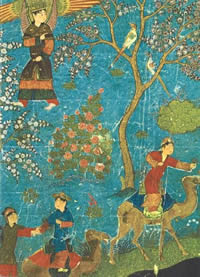 Allah paints a picture in the Qur’an of the most successful person: “So as for he who is given his record in his right hand, he will say, ‘Here, read my record! Indeed, I was certain that I would be meeting my account.’ So he will be in a pleasant life – In an elevated garden.” (Qur’an, 69:19-22)

This is the description of the Believer on the Day of Judgment – receiving his book in his right hand and sharing the good news to those around him out of pure joy and happiness. Allah (swt) says that this believer will be in Jannah (paradise).

While the disbelievers will be seized, chained, and then dragged, thrown, or pushed into the Fire, the Believers will be treated like royalty. Allah (swt) says, “On the Day We will gather the righteous to the Most Merciful like a band presented before a king for honor.” (Qur’an, 19:85)

They will not be humiliated like those in the Fire. Rather Allah (swt) says, “they will not be grieved by the greatest terror, and the angels will meet them, [saying], “This is your Day which you have been promised.” (Qur’an, 21:103) The Angels remind the believers that they should not worry and that they are safe – today is the Day they will receive the ultimate reward.

Allah (swt) will also give the Believers a light on the Day of Judgment that will brighten their faces and surroundings. Allah (swt) says, “On the Day you see the believing men and believing women, their light proceeding before them and on their right, [it will be said], “‘Your good tidings today are [of] gardens beneath which rivers flow, wherein you will abide eternally.’ That is what the great attainment.” (Qur’an, 57:12) While the disbelievers were dragged on their faces, the faces of the Believers “will be bright.” (Qur’an, 80:38) And “You will recognize in their faces the radiance of pleasure.” (Qur’an, 83:24)

We see in these verses that the Believers are told again and again that they are heading to Paradise, which heightens their excitement and also calms their worries of entering Hell-Fire.

Allah (swt) illustrates how the Believers will enter Paradise, “But those who feared their Lord will be driven to Paradise in groups.” (Qur’an, 39:73) Ibn Kathir says in his tafseer (exegesis) that this driving is one of “honor and esteem.” We can compare this to how royals, presidents, and celebrities are driven around comfortably in expensive cars. In the hereafter, this special driving will only be for the Believers. They will be riding first class to Paradise.

While they are being driven to Paradise, Paradise itself will come to them. Allah (swt) says, ““And Paradise will be brought near to the righteous, not far” (Qur’an, 50:31). Jannah comes closer to the Believers while they also come close to it – showing how the love to meet the other is mutual.

The believers will not have to open the doors of Paradise themselves; rather they will be opened for them before they even reach it, showing how they will receive a noble reception. Allah (swt) says, “Gardens of perpetual residence, whose doors will be opened to them.” (Qur’an, 38:50) It is a sign of courtesy today to open doors for others, and the Believers will experience this on behalf of Allah (swt)! The word (mufattahah) in this ayah is significant because it shows how the companions of Jannah are honored in a way we may not even think about: the doors are wide open for their arrival.

Allah (swt) says about the Believers, “Their greeting the Day they meet Him will be, “Peace.” And He has prepared for them a noble reward.” (Qur’an, 33:44) Salaam Alaikum (May peace be on you) is not only the greeting of this world, but it is also the greeting of the hereafter.

As the Believers enter the wide open doors of Paradise, the Angels will start to greet them by saying, “Peace be upon you; you have become pure; so enter it to abide eternally therein! [they will enter].” (Qur’an, 39:73)

The Angels will welcome the Believers – congratulating them on their hard work and perseverance, “Peace be upon you for what you patiently endured! And excellent is the final home.” (Qur’an, 13:24)

The Believers will also have the honor of receiving the greeting of “Peace,” a word from a Merciful Lord.” (Qur’an, 36:57) We see why the attribute of Mercy is mentioned in this ayah: Allah (swt) out of His Love and Gratitude for the Righteous will greet them in Paradise. You may win a chance to visit the White House, but the chance of having a special welcome from the President is very slim. Allah (swt), The King of Kings, The Most Majestic and Powerful, will greet and welcome His beloved slaves in their new home.

Allah (swt) recorded the reaction of the Believers in the Qur’an – and it’s probably exactly what you were thinking: “Praise to Allah, who has fulfilled for us His promise and made us inherit the earth [so] we may settle in Paradise wherever we will. And excellent is the reward of [righteous] workers!” (Qur’an, 39:74)