The reality of the 'All-American Muslim' reality TV show 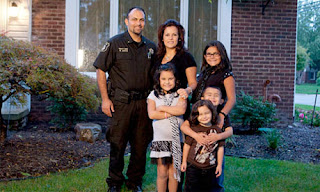 For those constantly fretting about the inability of Muslims to integrate or assimilate into western culture, fret no more!

American Muslims finally have their own reality TV show – the Learning Channel's "All-American Muslim" – focusing on the lives of five American Muslim families in Dearborn, Michigan, who are predominantly Lebanese and Shiite. The show's premiere gave TLC huge ratings and made the show No 2 in its time period. Mainstream critics have embraced the show citing it as "intimate and informative" and a "deeply intriguing, uncharacteristically thoughtful reality series".

Reality TV is the current zeitgeist of popular culture. Unlike the euro, it is the predominant cultural currency, whose value is skyrocketing. America is on a first-name basis with their cultural ambassadors: Snookie, Kate Plus 8, Paris, Ozzie and Kim. Could Shadia, the show's tattooed, country music-loving Lebanese American Muslim, with an Irish Catholic boyfriend, belong in the pantheon?

"[All American Muslim] is just a natural fit for us …We're always all about telling compelling stories about real families," says TLC's Alan Orstein, VP of production and development. But some have already taken deep offense to this "reality" show, which claims to portray the "real" lives of Muslims.

Within days of the show's premiere, the fear-mongering Islamphobia network complained the show is actually propaganda that promotes a "submission to Islam through the hijab" and "tries to make a religion which believes in world domination and the inferiority of women, seem normal". The author of this article, posted on David Horowitz's inflammatory Front Page Magazine, also goes on to compare Muslims to Nazis: "Muslims are like us [Americans]; that's the problem. The Nazis were like us too. So were the Communists."

Apparently, TLC is a stealth-jihadist outfit with grand schemes to brainwash American women into burning their swimsuits and tank tops and replacing them with modest, traditional Islamic clothing as a gradual means towards converting them to Islam. I'll be waiting for their next reality TV show: "UV Radiation Fighters."

Pamela Geller, founder of the shrill Atlas Shrugs blog and co-founder with blogger Robert Spencer of Stop Islamization of America, is convinced the show "is an attempt to manipulate Americans into ignoring the threat of jihad". Who would have thought a reality TV show could have so much brainwashing potential? Instead of mounting violent campaigns, all our enemies needed to secure victory was to produce "The Real Housewives of al-Qaida."

If Geller, Spencer and Horowitz were producing their version of American Muslim reality, the episodes would focus on the families' radical stealth jihadist plots. Through eight episodes, they would attempt to turn McDonald's golden arches into minarets, transform California to Caliph-ornia, place a burqa over the Statute of Liberty, creep sharia into the Denny's breakfast menu, and spike the elementary school eggnog with sumac and lentils.

A "real Muslim" according to many is this anti-American, extremist, violent stereotype – an image often plastered over news headlines. This myth is unsurprising, perhaps, considering 60% of Americans say they don't know a Muslim. Furthermore, the No 1 source of information about Muslims for American is the media, and often, the images are negative. Yet, according to all the studies and evidence, the reality of American Muslims is that they are moderate, loyal to America, optimistic about America's future, in tune with American values, well-educated, and are the nation's most diverse religious community.

That being said, nearly half of American Muslims say they have faced discrimination. The FBI just announced anti-Muslim hate crimes have risen 50%. And a Republican presidential candidate with an alleged proclivity towards sexual harassment and unintentionally hilarious campaign videos has claimed a majority of Muslim Americans are extremists.

The portrayal of Muslims living their daily lives is not only a welcome relief from the usual tawdry caricatures of Muslims as terrorists, extremists and taxi cab drivers, but it also helps defuse the deep-seated fears and bias that unfairly lumps 1.5 billion members of a faith in with the perverse criminal actions of a few.

However, even American Muslims have voiced their criticisms with the show. The Twitterverse exploded (figuratively) with comments reflecting the diversity of the American Muslim opinions. Some said the show misleads with the title "All-American Muslim", since it solely focuses on one niche religious, ethnic community (Lebanese Shiite in Dearborn, Michigan) and leaves out the majority of American Muslim communities, such as African Americans, South Asians, Sunnis and those from the low-income middle class. Others, apparently, want their TV Muslims to be avatars of religious and moral perfection and complained about some of the characters' portrayal of Islam. (Shadia is a tattooed, partying rebel dating a white, Irish Catholic man who converts to Islam in order to marry her. Nina is a busty, dyed-blonde, opinionated business woman, with a penchant for tight dresses and ambitions to open her own club.)

Which only goes to show that representing Muslims and Islam in the mainstream is an utterly thankless job. The term "Muslim" is itself so politically and culturally loaded that it is impossible to escape controversy, no matter how trivial or manufactured. Since Muslims are a marginalised community with very few positive mainstream representations, audiences unfairly project onto these five families all their own insecurities, assumptions, fears, political ideologies, religious opinions, personal stories and other gratuitous baggage. So, if the characters do not 100% reflect the reality of certain audience members, then they cease to be authentic or valid.

The five families on "All-American Muslim" should not be asked to represent all Muslims, Arabs or Americans. Does Jersey Shore represent all Italians? If so, you can hear Frank Sinatra crooning in his grave. Similarly, Kim Kardashian does not represent all narcissistic, wannabe socialites with a fetish for athletes. (That may be an insult to fetishes.)

The best way to view "All-American Muslim" is simply a show about five families doing their best to be themselves. They're just people, who happen to identify as Muslim, Arab and American. Their story isn't the wild-eyed, paranoid fantasy that is colored by the hate-filled minds of the Islamophobia network. It isn't the terrorist stereotype familiar to most American audiences thanks to mainstream Hollywood depictions and sensationalised news headlines. And it won't be the story of this nation's 3-4 million American Muslims (population estimates vary from 1.3 to 7 million), who will hopefully find more avenues to tell their unique narratives through mainstream outlets.

In the meantime, we should exhale and simply let this reality TV show succeed or fail on the merits of its ability to entertain, instead of obsessing about how "realistic" its depiction of Islam and Muslims is. If the ratings decline, TLC can always create a new talent show featuring the cast members of "The Real Housewives" and "All-American Muslim", judged by Kim Kardashian and Ozzy Osbourne, whose winner gets an opportunity to join all the previous winners from "Dancing with the Stars" in a new "Survivor" series about who lives beyond the 15th minute of fame.

That's a reality show whose authenticity cannot be denied.