Pamela Geller: ‘I Endorse Herman Cain. What He Doesn’t Know, We’ll Teach Him’ 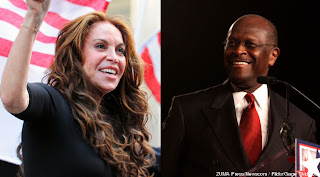 Is this the kind of help Herman Cain is looking for this week?

Cain has now picked up a top endorsement from the right-wing blogosphere: Pamela Geller, the anti-Islam campaigner and Birther.

Geller posted an entry on her blog Wednesday evening, declaring her support for Cain. In the past, Geller has criticized Cain, when he backed down from his statement that local communities should be able to ban mosques. She had also hoped that Sarah Palin would run, a dream that came to naught when Palin declared a month ago that she would not run.

But now, recent developments have put her on board. Specifically, the allegations of past sexual harassment against Cain — and the counter-accusation from Team Cain that the Rick Perry campaign was behind it — have changed her mind. Geller has long detested Perry, calling him soft on “stealth jihad” by Muslims in America.

Key quote from Geller’s new blog post, with emphasis in the original:

Perry is a snake. Watch him. He is creepy. And his drunken, freak show speech this past weekend belonged in a Roger Corman film.

I questioned his very bad judgment when I exposed his entire Islamic curriculum, dawah and proselytizing, to Texas school children. But this? Perry is a really bad guy. Only a lowlife (or a Democrat — Perry was Al Gore’s campaign manager) would eliminate a better man with innuendo and gossip. Men like Perry do not win on merit.

I endorse Herman Cain. What he doesn’t know, we’ll teach him.

Geller, author of a recent book Stop the Islamization of America: A Practical Guide to the Resistance, is perhaps best known for her campaigning against the Park51 project, a Muslim community center in downtown New York City that Geller and others have dubbed the “Ground Zero Mosque,” declaring that it is part of an international Muslim effort to subjugate America.

In addition, Geller called for a boycott of Campbell’s soup, when the company introduced a line of halal-certified products. In her denunciation of halal food, she has also made accusations that it is secretly being sold to non-Muslims: “we are being forced into consuming meat slaughtered by means of a barbaric, torturous, and inhuman method: Islamic slaughter, the cutting of the animal’s throat without stunning or any other form of mitigation for the animal’s pain.” It should be noted that this aspect of halal meat slaughter is the same as the Jewish kosher dietary rules.

She has also been waging a legal battle against the city’s transit authority, over their refusal of her submitted subway ad calling for support of Israel: “In any war between the civilized man and the savage, support the civilized man.”

Also, some of her more creative claims have come from her contributions to the Birther conspiracy theory, alleging that President Obama is ineligible for the Oval Office. In addition to the standard claim insisting that the president’s birth certificate is “an obvious forgery,” Geller has also alleged that the marriage of the president’s parents was not legally valid — and that people like Obama had different rights in 1789: “Illegitimate children had different rights — at least they certainly did in 1789. There is no way that the founders of this great nation intended for an illegitimate child of a foreign bigamist to attain the highest, most powerful position in the new land.”
source
Posted by Zafar Khan at 10:00