PAKISTAN: Tormented by stigma after rape 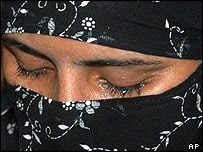 The three-room house in the Korangi area of the Pakistani city of Karachi, occupied until two months ago by Alam Din and his family of six, stands empty.

Neighbours say Din, a street vendor, left suddenly after his 14-year-old daughter was raped by several local youths while on her way home from an evening lesson. The crime was never reported; Din and his brothers felt to do so would damage family honour and instead Din apparently bundled his family and possessions on to a truck and left in the dead of night for Punjab province.

“The girl had to be carried out,” said Aleena Bibi, a neighbour. “She had been injured. It is a tragedy this should happen to a child, but now people also consider the house unlucky and are reluctant to buy.”

Many rapes in Pakistan, due to stigma, are never reported, and there are no precise figures on how many occur. However, the US Department of State, in its 2010 Human Rights Report states 928 cases of rape were reported.

“Prosecutions of reported rapes were rare. Police and NGOs reported that false rape charges sometimes were filed in different types of disputes, reducing the ability of police to assess real cases and proceed with prosecution,” it said.

“NGOs reported that police at times were implicated in rape cases. NGOs also alleged that police sometimes abused or threatened victims, demanding that they drop charges, especially when police received a bribe from suspected perpetrators.”

The autonomous Human Rights Commission of Pakistan states in its annual report for 2010 that 2,903 women - almost eight a day - were raped last year.

The Karachi-based NGO War Against Rape, in a statement released last month, said data collected from three hospitals and police showed that the average age of victims had fallen from 18 years last year to 13 this year in the city. WAR also noted only a minority of the cases reported from hospitals had been brought to the notice of police.

“The insensitive attitude of police, and the fact [that] women face further harassment at the hands of police, discourages them from reporting abuse,” Sarah Zaman, director of WAR, told IRIN.

There have been some horrendous reports of abuse by police, including that of a 13-year-old schoolgirl, Natasha Bibi, raped over 21 days while she was held by police in the northern Punjab town of Wah Cantt.

“It is the growing brutalization of our society and its patriarchal nature that allows incidents of this kind to happen,” said Gulnar Tabassum, a consultant for the NGO Shirkatgah, based in Lahore, which works for the rights of women.

“My daughter, who was only 12 years old at the time, was violently raped last year by her cousin. We did not report the matter to avoid a scandal, and to protect her from stigma. But even now rumours fly, my child refuses to leave my side and says she feels ‘dirty’ and we wonder who will marry her with this dark stain hanging over her,” Gulab Bibi, 40, told IRIN in Karachi.

In rural areas, the reluctance to report rape runs even deeper. Laiq Muhammad, a farmer in the Khairpur district of Sindh, says his nine-year-old sister was raped by the son of a powerful land-owner in the area. “These people have connections, they would simply bribe the police, and I have daughters and another younger sister’s safety to consider,” he said. “We cannot run the risk of further punishment.

“My sister’s life has changed for ever. She is only a child, but we are powerless to help her,” Muhammad told IRIN.


“A victim of sexual assault needs counselling and help. The fact that in our society she is not even able to talk of the incident in most cases only makes matters worse for the thousands of women who suffer rape each year,” Saima Akhtar, a Karachi-based psychiatrist, said.