Egypt: Samira v. the Military One woman dares to sue after enduring a "virginity check" at the military's hands. 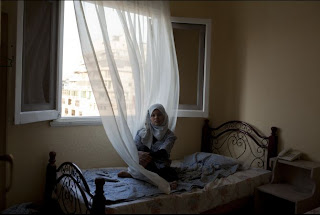 CAIRO – Samira Ibrahim likes pink, Che Guevara, and old revolutionary songs from the '50s. She doesn't like people picking on her younger brother. When she was a little girl, she landed a punch on a bully who was pushing him around.

She hasn't stopped fighting since. On a recent October afternoon, the 25-year-old traveled nine hours by train from her home in southern Egypt to Cairo to meet with her lawyers in a case she filed against the Egyptian military for what she claims was sexual assault in the administering of a so-called “virginity test” after she was arrested in Tahrir Square along with other female protesters.

On the ninth floor of a dingy hotel room in central Cairo, she recounted her ordeal for GlobalPost, sharing the details of what happened on March 9 when she was arrested along with 172 other protesters, including 17 women, as part of a crackdown on demonstrations that reignited in Tahrir Square one month after President Hosni Mubarak was forced to step down.

The women in the group were herded into police vans, taken to a military detention center on the outskirts of Cairo and ordered to separate into two lines — one for “virgins” and the other for “non virgins.” Then they were forced to undergo the so-called “virginity tests,” a controversial, some might even say ‘medieval,’ procedure in which women are forcefully penetrated in order to document blood from the hymen as proof of virginity. The invasive, painful, and often unreliable practice, which in some traditional societies in the Middle East and Africa has been used to ensure the virginity of a bride before marriage, has been condemned by Amnesty International as a form of torture.

“In the virginity test case, I was forced to take off my clothes in front of military officials,” says Samira, whose lip gloss matches her bold pink headscarf, a tradition of modesty for women in the conservative southern Egyptian region, where she was born and raised and still lives with her parents.

“Secondly, the person that conducted the test was an officer, not a doctor. He had his hand stuck in me for about five minutes. He made me lose my virginity. Every time I think of this, I don't know what to tell you, I feel awful. I don't know how to describe it to you, ” she adds.

“I know that to violate a woman in that way was considered rape,” she says. “I felt like I had been raped.”

Before her March 9 arrest, Samira was the general manager of a prominent marketing firm. Her four-day detainment prompted a military investigation at her office that cost her her job. She still can't find work.

Samira's decision to single-handedly challenge the military in court is rare for any woman, but particularly for a young woman from a traditional background. That her case has the support of her openly Islamist father is even more unusual, and her mother has been strongly behind her as well.

Her father, Ibrahim Muhammed Mahmud, a veteran political activist released from jail right before Mubarak was overthrown, says, “She's so much like me in her nature, so much like me. If we're doing the right thing, then we shouldn't be scared.”

“She has the right to file that lawsuit and demand her rights,” her father adds. “But you know, I'm skeptical of the judicial system.”

*****
Samira's case against the military protests the use of “virginity tests” while she and the other women were held in a military detainment center.

So far, Samira is the only woman who has filed an administrative case in Egypt’s civil court against the military over the virginity test incident.

Mona Seif, the founder of the group “No To Military Trials Without Civilians,” said Samira's decision to file the court case “takes a very strong woman” and “a supportive family.”

“Samira is very strong and her family is behind her,” she says. Of the women who have come forward publicly, Seif says only Samira has filed a lawsuit because many victims fear reprisals from the authorities.

But other women have spoken out about the alleged so-called “virginity testing” believed administered to Samira and others. Victim Salwa El-Houseini described her experience to reporters at a “No To Military Trials Without Civilians” press conference in mid-March but can't file suit because she has no national identification papers.

“If I, Salwa El-Hosseini, had filed a lawsuit, I would not have been like Samira or others,” she says. “People don't even know how far I would have gone.”

Other victims are impressed by Samira's fortitude. “She is a true warrior and really loves her country,” says another victim, Rasha Abdelrahman, a 28-year-old seamstress. Abdelrahman initially filed the equivalent of a police report on the issue, but has not followed up due to emotional problems. Samira, she says, “dreams of freedom.” The two sat next to one another on the bus after they were arrested and Abdelrahman recalls how they shouted political chants through the windows in an effort to reach the people on the streets. “We kept each other strong, and told each other that freedom has a price,” she says.

The Egyptian military is reportedly investigating what happened to the women following their arrest on March 9. Officially, Samira was charged with assaulting authorities, taking part in an unsanctioned gathering, and breaking curfew. She was detained for four days and released with a one-year suspended sentence.

A spokesman for the Supreme Council of the Armed Forces, the military body now ruling Egypt, declined to comment on the details of the case.

According to documents provided by an attorney on her case and translated from Arabic, her court filing to the Chief Justice of the Administrative Judicial Court and the Deputy Chief Justice of the State Council states that Samira “was exposed to the ugliest forms of humiliation and torture and a violation of the sanctity of her body that included being given a virginity test before the eyes and ears of the workers in the military prison during the period of her detention from March 9, 2011 until March 11, 2011.”

She demands that those responsible be held to account and punished. She also says she was not informed of the charges on which she was being held. Her case requests compensation for all legal fees but does not demand any other restitution as part of the case. In a parallel legal action, Samira has also filed a case against the military for referring her to a military court even though she is a civilian and for refusing her request to see a lawyer. She is due in court Tuesday, but her attorney said her case may be postponed because cases related to the upcoming parliamentary election have been given top priority.

Rights groups representing Samira and other victims are not hopeful. “We really have a very weak case,” says Ibigan Hassan, a lawyer working pro bono with the El Nadim Center for the Management and Rehabilitation of Victims of Violence, one of the rights groups working on Samira's behalf. Hassan predicts the court will close the case due to lack of evidence.

Even veteran rights workers in Cairo are impressed by the Samira's determination to use civic channels like the judiciary despite their reputation for corruption and lack of transparency.

Heba Morayef, the director of Human Rights Watch's Cairo office, describes her as someone who “wants to continue to fight the system because what happened to her was sexual assault and she wants justice.”

“Compared to the other people detained and the girls that I saw in relation to this case, Samira has the clearest concept of violation — she understands what it means to be violated physically as a girl,” says the El Nadim Center’s Hassan.

For Samira, the case is about making sure this never happens again.

“If any woman is violated and she files a lawsuit against her perpetrators, then this is going to eventually stop, and they're not going to put pressure on political activists by threatening to violate their wives or daughters,” Samira says.

She insists that if her case fails in Egypt, she'll take it to international bodies like the United Nations.

Morayef believes the so-called “virginity testing” was done as part of a new strategy being pursued by Egypt's ruling military, describing them as having gone “on the offensive” in recent months. Hassan thinks the crackdown on March 9 was intended to break the spirit of the revolution by systematically targeting individual political activists, such as Samira.

“Civilians were clearly planted within the protests as spies early on,” Hassan says, “to identify key leaders of the revolution.”

Samira was first arrested for her political activities at age of 16. But her rebel streak showed itself much earlier — her favorite childhood game was cops and robbers.

“She comes from a politicized background,” Hassan says. “She is someone who understands her rights and she went out to fight for her rights, she knows exactly what she is fighting for and understands what it is like to be in the kind of position she was in.”

Her mother, who hails from a small village and cannot read or write, comes from a family of dissidents.

“Samira has always been brave: ever since she was a little girl,” she says. “A guy once hit her brother, so she hit him, even though he was older than her, she beat him up.”

She was kicked out of university three years ago for taking part in a protest with the key April 6 opposition group.

"They arrested me, but you know how they arrested me?” she asks, reliving the events of March 9. “They pulled me from my hair. They dragged me on the ground and my stomach was kind of showing.” She was so humiliated by the exposure that she's still taking preventative measures. “Since then,” she says, “I've been wearing a swimming suit under my clothes so if something like that happens again, that won't happen.”

“There was a military general [standing nearby] and he started to accuse me of being a prostitute,” she says. “I was extremely surprised, thinking, why is he accusing me of that?”

Samira had briefly studied law and knew what was happening to her during her four-day detainment was illegal. “It occurred to me to ask for an attorney, and when I first went to the prosecutor I asked for an attorney and he sort of looked at me and said, 'You ask for an attorney? You all deserve to be shot.'”

The kinds of problems facing young people like Samira are part of a larger narrative of disillusionment unfolding in Egypt, with once-united opposition parties fracturing ahead of the November parliamentary elections and military leadership actively discouraging dissent. Authorities are also pressuring rights agencies, raiding their offices, confiscating files on key opposition figures, and threatening to adopt restrictive funding laws.

Many believe the revolutionary honeymoon is over.

Her headscarf flapping in the wind, Samira is standing in the middle of Tahrir Square. Just months ago the area had been a bustling center of political activity — the protesters' home base, code name “tent city.” Today, it's an empty ring of dirt with only a few scribblings political graffiti hinting at the historic events that took place there. But Samira says she's “still optimistic” about Egypt's future.

“Even if there's just one revolutionary, he or she can start the revolution all over again,” she says.