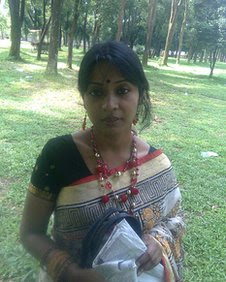 A top human rights group in Bangladesh has praised a bride who disowned her husband within minutes of their wedding because he demanded a dowry.

Sultana Kamal of the Ask rights group said that Farzana Yasmin had taken a "principled and brave stand against the gross injustice of dowry payments".

Ms Yasmin told the BBC that dowries "were the cancer of society".

Giving or receiving dowries is a criminal offence in Bangladesh but is still widely practised.

"Ms Yasmin has shown considerable bravery in doing what she did to highlight the evil and oppressive dowry system," said Ms Kamal, the head of the Ain o Salish Kendra (Ask) rights group.

She said that the number of enforced dowries in rural areas was alarming, and that it was not diminishing despite government efforts to wipe out the tradition.

"Already she is facing recriminations with several parties trying to defame her and portray her as a loose woman. In fact she is a heroine of Bangladesh."

'Have to protest'
Ms Yasmin's decision to divorce her husband within minutes of their wedding in the conservative southern district of Barguna has sent shockwaves through the country, with supporters and opponents of her action fiercely arguing their cases on Facebook.

The "10-minute bride" told the BBC that she wanted other "dowry-oppressed women" in Bangladesh to be inspired by her actions, which correspondents say appear to be without precedent.

"The dowry has become a cancer of our society. I have read this in newspapers and always wondered why people should put up with it," the masters graduate told the BBC's Shakeel Anwar.

"When I found myself getting caught up with this, I thought I have to protest.

"I know I cannot change the fate of thousands of other similarly oppressed women in the country but at least I have taken a stand."

Ms Yasmin - who has fled her home village to take refuge with friends and family in Dhaka - denounced her husband as she was about to be taken to her wedding car at the end of her marriage celebrations.

She told the BBC that he and his family wanted to delay her departure until they had received "gifts", including a TV and a fridge.

"My older sister reacted: 'We are going to give you our girl only, nothing else was promised'," she said.

Ms Yasmin said that she was "dumbfounded" by the actions of her "rogue husband" and his family. She ended up discarding her wedding dress and storming out of the ceremony.

She says that she is now filing for divorce.