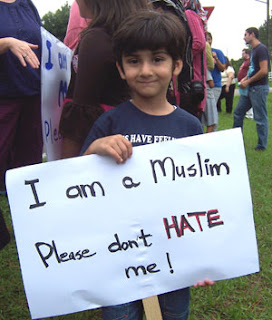 Anti-Muslim hate crimes soared by an astounding 50% last year, skyrocketing over 2009 levels in a year marked by the vicious rhetoric of Islam-bashing politicians and activists, especially over the so-called "Ground Zero Mosque" in New York City.

Although the national statistics compiled by the FBI each year are known to dramatically understate the real level of reported and unreported hate crimes, they do offer telling indications of some trends. The latest statistics, showing a jump from 107 anti-Muslim hate crimes in 2009 to 160 in 2010, seem to reflect a clear rise in anti-Muslim rhetoric from groups like Stop Islamization of America. Much of that rhetoric was aimed at stopping an Islamic center in lower Manhattan.
At the same time, the new FBI statistics showed a rise of almost 11% in anti-Latino hate crimes. The increase may be related to anti-immigrant rhetoric deployed as Arizona passed a harsh law targeting immigrants in 2010. Since then, even more anti-immigrant rhetoric has been heard around the country, suggesting that when the FBI's 2011 statistics come out, they will show a further rise in anti-Latino hate crime.

But it was the anti-Muslim numbers that were dramatic, and they occurred in a year when many watchdog organizations, including the Southern Poverty Law Center, reported an increase in Islam-bashing rhetoric. The year 2010 saw multiple verbal attacks on planned mosques, along with several violent attacks and arsons.

It's not provable precisely how hateful rhetoric from public figures drives criminal violence. But anecdotal evidence suggests the link is a tight one. Immediately after the 9/11 attacks, anti-Muslim hate violence skyrocketed some 1,600%. But then-President Bush gave several speeches that fall emphasizing that Muslims and Arabs were not our enemies -- only Al Qaeda was. Almost certainly thanks to that, anti-Muslim violence declined the following year by almost two thirds.