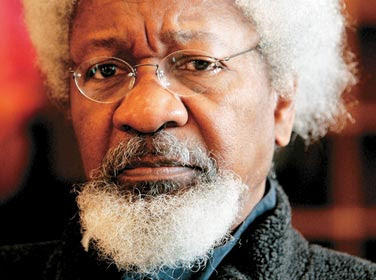 England is a "cesspit" and breeding ground for fundamentalist Muslims, the Nobel laureate and political activist Wole Soyinka has said in an interview in which he also accused Britain of allowing the existence of "indoctrination schools".

His extraordinary attack on what he views as Britain's part in fuelling Islamist terrorism was published on the US news and opinion website The Daily Beast. It was coupled with his assertion that the 1989 fatwa issued by Ayatollah Khomeini against Salman Rushdie meant that the assumption of power over life and death had passed "to every ­inconsequential Muslim in the world".

Soyinka, the first African to win the Nobel prize for literature in 1986, made his claims in response to a question about his homeland of Nigeriabeing added to the watchlist of countries deemed to be incubating terrorists, after the failed attempts of Umar Farouk Abdulmutallab to bring an airliner down over the US on Christmas Day.

"That was an irrational, knee-jerk reaction by the Americans," the writer said. "The man did not get radicalised in Nigeria. It happened in England, where he went to university.

"England is a cesspit. England is the breeding ground of fundamentalist ­Muslims. Its social logic is to allow all religions to preach openly. But this is illogic, because none of the other religions preach apocalyptic violence.

"And yet England allows it. Remember, that country was the breeding ground for communism, too. Karl Marx did all his work in libraries there …"

Soyinka added: "This is part of the character of Great Britain. Colonialism bred an innate arrogance, but when you undertake that sort of imperial adventure, that arrogance gives way to a feeling of accommodativeness. You take pride in your openness."

The attempted Christmas Day bombing has helped to raise fears that some British universities are becoming places in which young Muslims are radicalised – Abdulmutallab attended University College, London. But Soyinka, who splits his time between the US and Nigeria, suggested that British Muslims were being radicalised earlier in their lives.

"I doubt you can have the kind of indoctrination schools in America as you do in the UK," he said. "Besides, there's a large body of American Muslims in the US – the Nation of Islam – which has created a kind of mainstream Muslim institution. The Muslims there are open Muslims, whereas in Europe they tend to go into ghetto schools. "The Nation of Islam provides an antidote in the United States to fundamentalist Islam – which is why individuals from America have to go abroad to find radical teachings."

And , speaking about the fatwa issued by Khomeini against Rushdie, he said: "It all began when he assumed the power of life and death over the life of a writer. This was a watershed between doctrinaire aggression and physical aggression. There was an escalation. The assumption of power over life and death then passed to every single inconsequential Muslim in the world – as if someone had given them a new stature.

"Al-Qaida is the descendant of this phenomenon. The proselytisation of Islam became vigorous after this. People went to Saudi Arabia. Madrasas were established everywhere."

Riazat Butt has highlighted interesting problems in his comments.

Wole Soyinka has launched a blistering attack on England claiming it is a "cesspit" and a breeding ground for fundamentalist Muslims. Well, he has a point. Doesn't he?

The question mark is mischief making on my part but a lot of people will be nodding their heads in agreement with the words of the Nobel laureate. That they come from a man so erudite and feted adds gravitas to the outburst. He was asked how he felt about Nigeria being on a terror watch list. He wasn't very happy about it. In his mind, Britain is to blame for everything. Let's deal with his charges one by one.

1) Umar Farouk Abdulmutallab was radicalised in the UK.

We don't know. The answer is "possibly". His trips to Yemen are likely to have left a deeper mark. He has told US officials that he met al-Qaida operatives in Yemen who gave him the device which almost brought down Northwest Airlines flight 253 to Detroit and taught him how to use it. University College London, which he attended, has said it will investigate on-campus radicalisation.

2) England is a cesspit and allows religions to preach openly but this is illogical in the case of Islam because none of the other religions preach apocalyptic violence.

We have laws against that sort of thing. Sometimes the use of them backfires and makes people worry about freedom of speech and increasing the popularity of a group or individual. Counter-terrorism and counter-extremism measures don't have a great track record in terms of civil liberties but sometimes they work out for the best. I could mention the former Anglican archbishop of Nigeria saying that Muslims do not have the monopoly on violence but I won't.

3) We take pride in our openness.

Yes we do. That's what people love and hate about this country – that you can do pretty much what you like within the confines of the law. Our levels of tolerance and acceptance of difference is sometimes divisive – see the mixed opinions around the burqa debate – but generally there is a live and let live approach, or indifference.

4) The Nation of Islam (NOI) has created a mainstream institution in the US and provides an antidote to fundamentalism.

Really Wole? Really? Demanding a separate state, liberation from all taxes, banning intermarriage and race mixing is mainstream? Well, I guess the NOI is at least transparent about its aims and objectives.

I haven't had a NOI experience before – I might try and seek out a regional group in the US later this month. More of that later. My only "encounter" with the NOI is watching Joseph Mohammed in season two ofWeeds wooing Heylia James with bean pie and helping her to outmanoeuvre the DEA.

Nobody wants to their homeland to be on a terror watch list, nor do they want their country to be labelled a breeding ground for fundamentalism. There is a problem in this country. The government has acknowledged it, so has society. Soyinka insinuates that, not only is this scenario of our own making, it is one we are doing nothing to remedy. He reminds me of the pope in this respect. Thousands of miles away with no first hand knowledge or experience of Britain. Out of the country and out of touch.

Mehdi Hasan wrote the following in the newstatesman:

Last night I took part in a discussion, on the BBC World Service, about the Nigerian poet and Nobel Laureate Wole Soyinka's outrageous comments on Britain and Islam.

Riazat Butt has an excellent response over at the Guardian's Comment is Free, but I wanted to pick up on some of the 75-year-old Nigerian writer's key howlers:

1) "England is a cesspit. England is the breeding ground of fundamentalist Muslims."

Sweeping statement, anyone? There are, according to the Home Office, 111 terrorist prisoners in Britain who describe themselves as Muslim, and 75 who describe themselves as British. MI5 says it is monitoring the activities of about 2,000 individuals, who we can assume are Muslims. But there are two millionMuslims in the UK. Three-quarters of them identify with the UK (compared to only half the general population). So, some context perhaps, Wole?

2) "The man did not get radicalised in Nigeria. It happened in England, where he went to university."

Really? Where's the evidence, Wole? Umar Farouk Abdulmuttalab spent three years in university in London but, according to his Wikipedia biography, he was defending the Taliban's activities in Afghanistan back in his high school days in Africa. According to Hillary Clinton, "The information we have on the Christmas Day bomber so far seems to suggest that he was disturbed by his father's wealth and the kind of living conditions that he viewed as being not Islamic enough."

The Nigerians who rang in to the World Service last night were none too pleased when I mentioned Clinton's damning verdict on Nigeria's "radicalising" poverty, inequality and corruption. Then there is the Yemen factor -- Abdulmuttallab has told interrogators that his al-Qaeda handlers were Yemenis, and they provided him -- in Yemen! -- with the explosive device he stored in his underwear.

3) "Its [Britain's] social logic is to allow all religions to preach openly. But this is illogic, because none of the other religions preach apocalyptic violence."

This, for me, is the damning quote. How depressing it is that so many of our best Islamist-baiters turn out to be run-of-the-mill Islamophobes. Martin Amis, for example, claimed to be worried only by Islamists and not by Muslims -- until he warned that "the Muslim community will have to suffer until it gets its house in order". Whoops!

Soyinka starts off the interview moaning about "fundamentalist Muslims", in the context of the attempted terror attack on Christmas Day, before claiming that "none of the other religions preach apocalyptic violence", implying that Islam DOES preach "apocalyptic violence". Yet another sweeping, ill-informed and bigoted view about the world's second-largest, and fastest-growing, faith.

Oh, and has he noticed what fundamentalist Christians in his beloved Nigeria have been up to recently? Perhaps Soyinka's intemperate outburst is a result of his experience of Nigeria, where militant Muslims in the north and militant Christians in the south are killing each other in their hundreds and thousands. Still, why blame "England" or Islam and Muslims as a whole?

Later in the Daily Beast interview, in a telling Eurabian moment, he refers to "open Muslims [in the United States], whereas in Europe they tend to go into ghetto schools." What, all of us? Who is this "they"?

4) "It all began when he [Ayatollah Khomeini] assumed the power of life and death over the life of a writer . . . Al-Qaeda is the descendant of this phenomenon."

Bin Laden is the descendant of Khomeini? The Sunni extremists of al-Qaeda are an offshoot of the Shia hardliners of the Iranian Revolution? Really? Has Soyinka gone mad? Has he ever read any history? Does he understand ANY of the differences between Sunni and Shia Islam?

This is wilful ignorance, based on sweeping generalisations. Al-Qaeda is a "descendant" of Sunni Salafist Islam, of the takfiri ideology of Sayyid Qutb and co, of the war against the Soviets in Afghanistan, etc, etc.

5) "I doubt you can have the kind of indoctrination schools in America as you do in the UK. Besides, there's a large body of American Muslims in the US -- the Nation of Islam -- which has created a kind of mainstream Muslim institution."

This is madness. The Nation of Islam is not a "mainstream Muslim" group. Its members are not considered orthodox or mainstream Muslims, because they refuse to sign up to basic Islamic beliefs (about the nature of God, the finality of the prophethood of Muhammad, and so on). It is a crackpot, anti-Semitic cult, based on bizarre black-supremacist theories on the origins of man, which forbids interracial marriage. And these are the "Muslims" that wise Wole thinks are "mainstream", and examples to the rest of us? He must be having a laugh . . .

Reading Soyinka's remarks about "England" and "Muslims, I'm not sure whether I'm more offended and outraged as an Englishman or as a Muslim. He used to have a great mind and was one of the foremost campaigners against apartheid and bigotry, a real political and cultural icon. What on earth happened to him?

If interested, also read the zunguzungu blog here.
Posted by Zafar Khan at 08:09