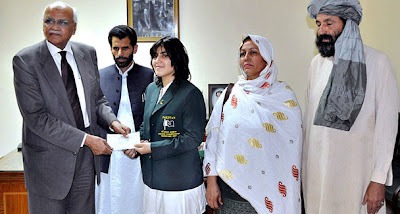 South Waziristan always makes local and international headlines as the epicenter of militancy in Pakistan and the stronghold of the feared Tehrik-e-Taliban Pakistan (TTP).

But Maria Toor, the women squash champion of Pakistan, offers a soft face of the restive mountaineer region and hopes to help clear stereotypes about her homeland.

"My people are wonderful. It’s only a myth that there are only militants or hardliners," Maria, 20, told IslamOnline.net.

"My area has produced a number of people who have proven themselves in different walks of life."

Recalling her childhood days in the town of Shakai, a witty Maria says she used to fight with boys in the streets, which ultimately helped her become a strong and independent woman.

"My father raised me as a boy, and I too have always considered myself a boy," she said, noting that this why her first sport choices was weightlifting.

She disguised herself as a boy to take part in her first ever sports event, which was a weightlifting championship in Peshawar.

"I beat all male players in that championship," laughed Maria, with short hair boyishly cut above her neck.

However, due to the lack of facilities for women weightlifters, she decided to give up the sport, though she still thinks she had the potential to excel in that field.

Maria gives credit to her father for all her achievements.

"It’s my father who has brought me here. He had to migrate from Waziristan to Peshawar because he did not accept the so-called tribal traditions, which have nothing to do with Islam."

Her father Shams-ul-Qayyum, a government servant, is a traditional Pashtun who wears the traditional Shalwar Kameez (lose trouser and shirt) and sports a long beard.

He hails from the Wazir tribe, the second largest tribe in South Waziristan after Mehsuds.

He was the first ever man in the tribal area to allow his wife to take the central superior services exams to become part of the government's administration.

"My mother was the first ever woman from Waziristan who appeared in the CSS exams," said Maria.

But by allowing his wife to remove her face-veil, to appear in the CSS exams, Shams-ul-Qayyum violated the centuries-long traditions of the tribal area.

For that, he had to leave with his wife and children.

"I do not regret what I did," he told IOL proudly.

"I did everything for my daughter and other children. I would just say that I am proud of my daughter."

Maria admits that there is a little room for women in normal course of life in rugged Waziristan.

"For a majority of women and girls their boundary walls are everything," she notes.

"It’s the entire world for them, which definitely is because of local culture and tribal traditions."

The squash champion insists, however, that this has nothing to do with Islam which is the biggest exponent of women rights.

"Islam doesn’t forbid women to excel in every walk of life," Maria insists.

"I believe that Islam has granted more rights to women than any other religion. And I also believe that we girls should not misuse these rights."

The young lady is preparing to travel to Cambridge University for a five-year scholarship.

"I am not going forever," she says with a big smile on her face.

"Inshaullah I will come back and will struggle to change the lives of our women."