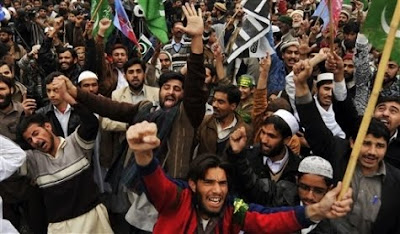 Pakistan is marking Kashmir day with countrywide demos to show solidarity with the people of Kashmir. Pakistan believes that there can be no lasting peace with India unless the core issue of Kashmir is settled.

Despite international pressure on Pakistan to deploy more forces on its Western Border to fight the Taliban the Pakistani army is still eyeball to eyeball with the Indians after India reactivated its forward operating airbases and deployed its forces on the border with Pakistan.

That prompted Pakistan to go for a policy of a quid pro quo by sending her forces to take up defensive positions and reinforce her forward positions to thwart off any Indian attack.

The Indian military Chief has recently talked about a Cold Start option, i.e. to strike first and mobilise later policy.

However Pakistan’s military Chief General Kiyani said such take was dangerous and that any such option could lead to a spiral of events that would be difficult to control.

The Indian talk interestingly came on the heels of a visit by the American defense secretary Robert Gates to India where he warned that India may not be able to show restraint if she was attacked again.

India recently signaled that it would restart talks at secretary level with Pakistan in what is seen party due to the American pressure on India but Pakistan’s foreign Ministry replied by saying that the Indians must outline the agenda for the talks.