Research into Islamophobia across Europe 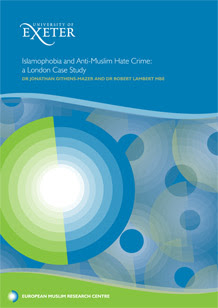 A new report launched on 28 January reveals the trends behind underreported violence against Muslims in London.

This is the first step in a ten year research project led by the European Muslim Research Centre at the University of Exeter that will investigate Islamophobia and anti-Muslim hate crime in towns and cities across Europe.

Dr Jonathan Githens-Mazer and Dr Robert Lambert MBE, of the University of Exeter co-authored ‘Islamophobia and Anti-Muslim Hate Crime: a London Case Study’ the first study from the new European Muslim Research Centre. This report is being launched today in partnership with Muslim community groups to provide research for and about Muslims in Europe. The authors call for anti-Muslim hate crimes to be taken more seriously by government, media and the police.

The report finds that Muslim Londoners face a threat of violence and intimidation from three groups. Firstly from a small violent extremist nationalist milieu that has broadly the same political analysis as the British National Party (BNP). Secondly from London gangs who have no allegiance with or affinity to the BNP. Thirdly from a small number of Londoners and visitors to London who appear to be acting on prejudices gained via negative media portrayals of Muslims as terrorists and security threats.

The report illustrates how perpetrators of hate-crimes against Muslims are invariably motivated by a negative view of Muslims acquired from mainstream or extremist nationalist media reports or commentaries. These spread stereotypes and fears that stigmatise, alienate and isolate Muslims as threats to safety, security and social cohesion. As political commentator and journalist Peter Oborne, says in a foreword to the report that British Muslims now perform an ‘unenviable outcast role’ previously played by ‘Germans, Roman Catholics, Jews and West Indians’.

He added, ‘Additional problems arise because a significant number of Muslim Londoners don’t report crimes to the police, and that makes it difficult to assess or quantify the scale of the problem.”

The evidence for the report arises from original in-depth interviews with victims of anti-Muslim hate crime, and in some cases perpetrators of racist crimes. The report is intended to introduce politicians, public servants, police, media and public to Muslim community perspectives that are often hidden.

A more detailed follow-up report Islamophobia and Anti-Muslim Crimes in the UK is due out in July 2010 which will analyse the situation in other UK towns and cities as well as London.

Note to Editors: Full report of Islamophobia and Anti- Muslim Hate Crime a London case study is available for download on Thursday 28 January from www.exeter.ac.uk/emrc.