Robert Fisk on the Israeli Lies and Propaganda 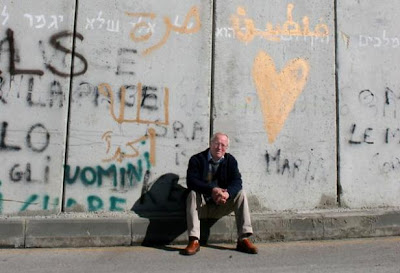 But it was the set of Ben-Gurion's quotations that caught my eye: statements on the eternal morality of the State of Israel, messages from the great man – who physically was a very little man (I opened his bedroom cupboard and there were jackets and trousers of almost midget size) – in time of war. Here is Ben-Gurion, for example, during Israel's War of Independence – the Palestinian Arab 'Nakba' – when he feared that Jewish forces would destroy Muslim holy places in Jerusalem, cabling on 15 July 1948. "Further to my previous order relating to the Old City – you should see to it that the special force to be appointed for guarding the Old City uses mercilessly machine-guns against any Jew, and especially any Jewish soldier, who will try to pillage or to desecrate any Christian or Moslim holy place." In 1967, he was boasting of how, during the establishment of the state of Israel, "we did not damage any single mosque." Yet he was already creating myths. The undamaged mosques, he wrote in the same statement, were found in villages "without a single Moslem, as all of them had already fled during the [British] Mandatory rule and before the declaration of the State..." Amid the detritus of Ben-Gurion's life, his thick-framed spectacles, his Quink fountain pen ink ("permanent black"), the willow-pattern plates, the original 1951 Marc Chagall sketch of a rabbi with a harp, the old transistor radio in the shelter – we shall forget the elephant tusk from the president of Gabon – there are musings on the morality and nobility and purity of arms of Israel's army. "The fate of Israel depends on two factors: her strength and her rectitude." And again. "The State of Israel will not be tried by its riches, army or techniques, but by its moral image and human values."

During the blood-soaked Israeli siege of Beirut in 1982, an event which marked the decline of that rectitude and moral image, a wonderful Doonesbury cartoon depicted a press conference in which an anonymous voice asked an Israeli spokesman: "What has become of the Israel we knew and loved?" And the immediate rejoinder to the questioner? "Come off it, Yasser!" For in a sense, the lugubrious Arafat did adhere to Ben-Gurion's myth-making. In the end, he even signed up for peace with the state which had already taken 78 per cent of the land he called home. He was a super-terrorist who became a super-statesman and then – after refusing to submit at the final Camp David meeting – became a super-terrorist again.

The truth is that Israel has destroyed many mosques, that the original Palestinian Arab victims of the 1947-8 war did not all flee, as Ben-Gurion suggested; many, like the doomed men and women of the Deir Yassin massacre, were murdered in their villages. The Israeli army, to some of us who have watched it in action, is a rabble, little different from the Arab armies of the Middle East. The numbers of civilian dead in the Gaza war were as much an outrage as the Sabra and Chatila massacre of 1982 when Israeli soldiers watched – quite literally – as the Lebanese militia they had sent into the refugee camps eviscerated the Palestinian civilians inside. Foreign journalists continue to prattle on about the supposed purity of Israel's soldiers.

"Israel has already proved itself the most restrained nation in history. It has set an all-time record for restraint," one Robert Fulford waffled in the Canadian National Post in January last year, at the height of the Gaza slaughter, when even Tzipi Livni admitted Israel's soldiers had been allowed to "go wild". Israel's own rightist correspondents still portray the outside world as a dark, malevolent planet in which every criticism of Israel emerges from endemic anti-semitism, in which Nazism did not die in the embers of Berlin in 1945. The Jerusalem Post, bashes the drum of racism almost daily. "Berlin Holocaust studies professor slammed for defending Nazi mentor." "Weisenthal slams Ukraine award to nationalist linked to Nazis." "Dershowitz: Goldstone is a traitor to the Jewish people."

I don't doubt that Stepan Bandera's Ukrainian nationalist movement was a dodgy bunch of racists – and its original adherents were indeed anti-semitic murderers in the Second World War – but where does this end? The Simon Weisenthal Centre – named after a truly honourable man whom I once met in Vienna as he campaigned for Gypsy as well as Jewish victims of the Nazis – is the same organisation which is now proposing to build a 'Museum of Tolerance' on an ancient Muslim graveyard in west Jerusalem. And poor old Richard Goldstone, a Jewish jurist and another honourable man whom I met in the Hague when he was investigating war crimes in ex-Yugoslavia, is a 'traitor' because he said that Israeli soldiers may have committed war crimes in Gaza; in other words, Goldstone – for this is the point – should have allowed his ethnic origins to rule in Israel's favour rather than abide by the rule of law.

Read the complete article at The Independent, UK, here.
Posted by Zafar Khan at 08:16