Dictatorship, not Freedom for Morocco 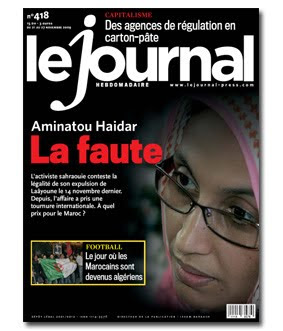 About six or seven years ago, I began returning regularly to my birthplace of Morocco, a country I left as a child in 1989. The Morocco of my childhood was an isolated, quasi-feudal dictatorship in which the regime of the late King Hassan II brooked no dissent. During the 1990s, in the face of global changes after the fall of the Soviet Union and a greater concern for human rights among the governments and publics of Morocco's western allies, King Hassan began a slow transformation of his ossified regime. By the time he died in 1999, he handed over to his son a political system that had the long-shunned opposition in government, a much-improved human rights record, clearer economic governance and one of the freest press in the Arab world.

I had missed out on all these developments, and was astounded at the difference a little over a decade had made. For a while, like many Moroccans, I was optimistic that the new king, Muhammad VI, would continue his father's reform process. The early years of his reign seemed to bear this out, with landmark reforms of human rights, the region's only truth and reconciliation commission over past human rights abuses, and a focus on addressing poverty that earned him the monicker "king of the poor".

However, it was Le Journal Hebdomadaire, an irreverent and audacious magazine, that seemed to me – perhaps because I was editing a like-minded publication in Egypt at the time – to most embody the changes that had taken place. Le Journal gave me hope that the new Morocco was real, and that the new king would allow a gradual and peaceful transition to democracy.

Last Thursday, I learned from the man behind Le Journal, Abou Bakr Jamai, that bailiffs had come to the magazine's office, just as its journalists were putting the final touches on a new issue, to seize its assets. A series of crippling libel fines and debts to the tax authorities had driven it to bankruptcy. "We can already officially announce the death of Le Journal," Jamai told me. I was shaken to learn that no more issues of Le Journal would appear, although not surprised. It had become clear for several years that the palace – whether the king himself or his coterie of advisers – had given up on trying to co-opt or intimidate the magazine, as it has done with many other publications, and would sooner or later succeed in pushing it into oblivion by economic means.

Le Journal first hit the newsstands in 1997 and very quickly became one of the most daring publications in the country. It issued an early attack onDriss Basri, the all-powerful interior minister who for 20 years controlled Morocco through a web of informants and ruthless security forces. Attacks on Basri became commonplace after the new king dismissed him, but at the time it was considered suicidal. This was one of many taboos that Le Journal blasted away.

It uncovered and publicised human rights abuses, taking the regime to task on its claims that it had broken with its bad old ways. It provided a detailed and continuous critique of the "hostile takeover" the new king's advisers were making on the private sector, bullying their way into unnatural monopolies and dampening entrepreneurial spirit. On theWestern Sahara conflict, Le Journal pleaded that the best argument for Morocco would be respect for Saharawi human rights and a genuine democracy. It was socially progressive, but politically smart and conscious of Morocco's conservative traditions, avoiding the facile Islamist-bashing of the Francophone elite.

Most of all, Le Journal tried to keep officials honest about the democratisation that they promised in speeches. It relentlessly campaigned for constitutional reform that would shift political power from the palace to parliament. For many of my generation of Moroccans, it provided a political education and an inspiring example of outspokenness.

The government could not simply close down a magazine, particularly one renowned at home and abroad as one of the symbols of a "Morocco on the move". Instead, it chose to suffocate it. Over the past decade, Le Journal has had numerous issues banned and faced a campaign to label its journalists as irresponsible "nihilists". Security chiefs have manipulated Islamists against it, and it has suffered countless other indignities. Most important, though, were two weapons. First, an advertising boycott that deprived the once-profitable magazine of revenues, not only from state-controlled firms and those owned by the royal family, but also from private advertisers who were warned the palace would look adversely at any support for Le Journal, even though it was one of the best-selling publications in its category.

The second weapon was the use of Morocco's crooked judicial system to obtain the largest libel fines ever imposed in the history of the Moroccan press. By 2007, after a long confrontation with the judicial system and the regime, Jamai decided on self-imposed exile to protect Le Journal, which continued without him for two years. While this bought some temporary breathing room, his return as an editorialist in 2009 appears to have sealed the magazine's fate: by September last year, a final verdict from the highest court in the land found against Le Journal. It has been living on borrowed time ever since.

The most worrying thing is that its closure comes amid other signs of a renewed authoritarianism. The methods originally used against Le Journal have become a commonplace method of disciplining the press. Other critics of the monarchy, for instance in Morocco's vibrant blogosphere, are now dealt with severely. Political reform has hit a standstill, and the regime's human rights record has regressed.

Le Journal's sad demise is now only one of many signals that something is rotten in the kingdom of Morocco.