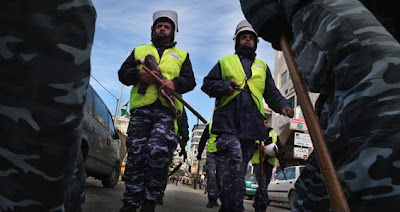 Abu Abdullah has never been charged with a crime, but he has been arrested by Palestinian security forces so many times in the past two years that he has lost count.

He has been arrested at work, in the market, on the street, and, more than once, during violent raids by masked men who burst into his home and seized him in front of his family.

Deep in the heart of the Deheishe refugee camp on the outskirts of Bethlehem, Abu Abdullah describes in detail the beatings he has endured in custody, the numerous cold, sleepless nights in cramped and filthy cells, the prolonged periods bound in painful stress positions, and the long hours of aggressive questioning.

"The interrogations always begin the same way," Abu Abdullah explains. "They demand to know who I voted for in the last election."

Abu Abdullah is not alone. Since Palestinian Prime Minister Salam Fayyad's caretaker government took power in Ramallah in June 2007, stories like Abu Abdullah's have become commonplace in the West Bank.

The arrests are part of a wider plan being executed by Palestinian security forces - trained and funded by American and European backers - to crush opposition and consolidate the Fatah-led government's grip on power in the West Bank.

The government of Mahmoud Abbas, the Palestinian president, is bolstered by thousands of newly trained police and security forces whose stated aim is to eliminate Islamist groups that may pose a threat to its power - namely Hamas and their supporters.

Under the auspices of Lieutenant-General Keith Dayton, the US security coordinator, these security forces receive hands-on training from Canadian, British and Turkish military personnel at a desert training centre in Jordan.

The programme has been carefully coordinated with Israeli security officials.

By the end of Dayton's appointment in 2011, the $261mn project will see 10 new security battalions, one for each of the nine West Bank governorates and one unit in reserve.

Their aim is clear. Speaking before a House of Representatives subcommittee in 2007, Dayton described the project as "truly important to advance our national interests, deliver security to Palestinians, and preserve and protect the interests of the state of Israel".

Others are even more explicit about what the force is for. When Nahum Barnea, a senior Israeli defence correspondent, sat in on a top-level coordinating meeting between Palestinian and Israeli commanders in 2008, he says he was stunned by what he heard.

"Hamas is the enemy, and we have decided to wage an all-out war," Barnea quoted Majid Faraj, then the head of Palestinian military intelligence, as telling the Israeli commanders. "We are taking care of every Hamas institution in accordance with your instructions."

When he arrived in the last days of 2005, Dayton's assignment was to create a Palestinian security force ostensibly tasked with confronting the Palestinian resistance. The project began in Gaza.

Sean McCormack, a state department spokesman at the time, explained Dayton's role as "the real down in the weeds, blocking and tackling work of helping to build up the security forces".

But within weeks of his arrival, things began to fall apart. Hamas' decisive January 2006 election victory ushered in a crippling international blockade on the Palestinians in Gaza. Soon after, the security forces of Hamas and Fatah began fighting in the streets, culminating in Hamas' June 2007 takeover of the enclave.

Dayton's initial aims lay in tatters, and while Fayyad became prime minister in a 'caretaker' government in Ramallah, a new security strategy was formulated.

As a grim status-quo established itself in Gaza, Dayton's new mission became clear. The job of the security coordinator was now "to prevent a Hamas takeover in the West Bank," according to Michael Eisenstadt, Dayton's former plans officer.

A coordinated attack on Hamas' civilian apparatus was launched immediately after the takeover in Gaza in June 2007. Major-General Gadi Shamni, the head of the Israeli army's central command, led an initiative to target the base of Hamas' support in the West Bank. The plan, dubbed the Dawa Strategy, involved pin-pointing Hamas' extensive social welfare apparatus, the lynchpin of their popularity amongst many Palestinians.

Dr Omar Abdel Razeq, a former finance minister in the short-lived Hamas government, explains the effect this had. "When we talk about the infrastructure we are talking about the societies and the cooperatives and the institutions that were to help the poor," he says. "They finished [off] the infrastructure of Hamas."

Israeli Brigadier-General Michael Herzog, the chief of staff to Ehud Barak, Israel's defence minister, summed up the Israeli view of the project. "[Dayton's] doing a great job," he said. "We're very happy with what he's doing."

Read the complete article at Al-Jazeera.
Posted by Zafar Khan at 11:13