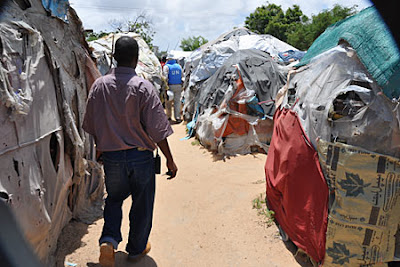 The plaque on the State House building in Hargeisa, capital of Somaliland, is an oblique commemoration to an event that never occurred. It was built in 1952 for a visit to the then British protectorate by the newly crowned Queen Elizabeth II. The Queen never came. These days the half-ruined structure is known for another reason than as the former seat of gin-sipping British colonial officials.

The grounds, including parkland once laid out as a golf course, have bred domed shelters – "bool" they are called – thatched with plastic and segments of scavenged cloth. In places, walls have been tiled with panels of flattened cooking oil cans, which in their repetitions resemble Warhol prints. The bools are low, windowless huts through which the harsh light bleeds messily at the sewn seams to illuminate the kicked up dust. The occupants of this camp sit at the far end of the planet's social spectrum from the State House's first intended guest. Not a monarch and her retinue but refugees from war.

The huts are so densely packed together they block the State House from sight. It is barely visible when approaching the camp, but the monument marks the centre of a labyrinth of winding, narrow lanes where cockerels scrabble. When I reach it at last, I find the State House is not occupied itself save for a single wing of outbuildings. Its rooms are open to the sky, floors scattered with detritus. Glassless window frames swing in the wind.

But it is far from empty. Children clamber over walls of square-cut honey-coloured stone, partly demolished by fighting in the city in 1988. They sit on the floor of what once was a grand reception room to play complex games with piles of pale round pebbles, tossed and snatched from the air by competing hands. Outside, a few young men sit on a veranda painted with graffiti, listening to music. They pull jackets over their heads to hide their faces at our approach and warn against photography.

It is a clue to the identity of many living inside the State House camp: the still anxious victims of the war in the south, in Somalia proper, the country from which Somaliland – recognised by no other state – split in 1991. Victims of the world's worst humanitarian disaster. And conflict, even at a distance from the running gun battles on Mogadishu's streets, imposes its own hierarchies.

The most recent refugees, the poorest, live at the periphery, farthest from the State House itself. Which is why it is surprising to find Sarida Nour Ahmed, aged 31, a recent arrival, occupying one of the building's few habitable rooms, a few metres square. Once used to house the British governor's staff, these days it is roofed with corrugated metal which leaks in the rain. A bool would be much better, she explains.

Sarida fled from Somalia in March, abandoning three of her 10 children in the chaos of flight. "The situation was unbearable. Mortars were landing during the day. At night there was torture, rape and beatings. At first we thought it was because of the Ethiopian invasion. But things got worse. They came to our houses. Robbed and raped." I ask her who? The Shabaab, she says. The Shabaab. The word means literally "the youth". And it is the story of the victims of the Shabaab's continuing war that I have come to the camps of Somaliland to find.

Once comprising the northernmost part of Somalia's failed state, for the past two decades Somaliland has proclaimed itself an independent republic. Stable, if not prosperous, it has become a refuge for Somalis from the south, most making their way up north from Mogadishu. For those from Somalia's southernmost towns it is a dangerous journey that can take several months, with long stretches on foot.

The Shabaab was once one of the Islamist militias attached to the Islamic Courts Union, which, in 2006, brought a semblance of peace to a country that had been wracked by years of internecine violence and warlordism. The Courts were routed after a few months by a western-supported Ethiopian invasion. Now the Ethiopians have gone, too, and a fundamentalist hardcore of the Shabaab is resurgent, Somalia's most bitter tormentor – Africa's own Taliban.

Its masked men, accused by America of being proxies for al-Qaeda, enforce their own notions of justice, seizing suspected collaborators with the feeble new government from their houses and murdering those it regards as opponents, including dozens of local journalists and aid workers. Its feared and secret sharia courts have sentenced women to be buried and stoned to death for adultery or publicly beaten for infringing strict Islamic dress codes. Somalis say that, beyond the facade of harsh and rigid piety, the group robs and kills and sexually assaults with impunity.

Arriving at the State House camp, accompanied by Oxfam, which is helping to support its residents, I ask to talk to the most recent arrivals from Mogadishu and the south. A group of women lead me through a ruined stone doorframe and across a little yard. It is here, in a dark, bare room smelling of smoke from her cooking fire, that I first meet Sarida. In Mogadishu, she tells me, she and her husband had a "proper house" with five rooms. They owned a little shop and sold cold juices and vegetables in the market. These days she washes clothes and skivvies, when she can, to feed her children. She cannot remember the last time they ate meat.

She describes the violence in fragmented snatches that reflect the chaos in a city where all sides – government, African Union peacekeepers, Ethiopians and the Shabaab – fight their pitched battles over civilian neighbourhoods, not caring who is killed.

"First the Shabaab fought with the Ethiopians. When the Ethiopians left," recalls Sarida, "we thought then that Somalis would come together. But it didn't happen." What happened instead, she explains, is that the Shabaab moved to impose its values on Somalis in the large areas it controls, bringing more violence as it did. "Women get 90 lashes even for wearing 'light' clothes," says Sarida. "And for not wearing the veil. But the veil costs money. I didn't have money for a veil..." It is a complaint I hear from many women.

Sarida describes the worst day of her life. She does not cry. Not quite. It was a day that began with mortars falling on her neighbour Amina's house and ended with the loss of three of her children. "To see her in pieces…" she loses her train of thought for a moment. "Mogadishu is a big city. You used to be able to run to another neighbourhood [to escape the fighting], but the fighting was all over the city. I grabbed the children that were close to me and fled with the clothes I was wearing." Her eldest children, aged 12, 11 and 10 – nowhere in sight in the family's panicked impulse to flee – were left behind. So too was Sarida's husband, Abdi Khader. I ask the children's names. She says quietly: "Mohammed, Abdi and Hussein. I cheat myself thinking my husband might have got to the children and rescued them."

But Abdi Khader does not know where Sarida ran to. Or where she is living now. Since that day, she hasn't heard from him. "If I could turn back the clock I would have my husband and my children here with me. But I can't go back."

Meanwhile what is happening in Somalia?

Fatma Adow reaches for a remote control to amplify the volume of her music player as she engages a customer in a seemingly funny joke. They talk loudly amid the thundering music from the woofers, and finally the customer parts with a music cassette.

"Try this in Somalia, and that will be the end of you," she said. "You'll be lashed, stoned to death, or forever get shunned,” Fatma said.

Fatma is one of the 25 women, who on November 2008 faced the wrath of militiamen from the Islamic Courts Union for taking part in a folklore dance galore in Shabelle zone, Mogadishu, north of Somalia.

"Charges were opened against us, and we were accused of taking part in an 'un-Islamic event,'" she told IslamOnline.net (IOL). She managed to flee the country and is now operating a music shop in Eastleigh, a Nairobi suburb inhabited by Somalis.

Such punishment, according to Fatma, has been meting out to a number of other Somalia woman musicians.

"Even our customers and spectators have also been punished for 'wasting' their time and corrupting morals," she added.

Lists of edicts have been circulated to a number of media houses, warning them to trash all secular songs from their broadcasts.

"This is unacceptable. We have refused to air their tenets and are now zooming in to media houses from all angles. They have lashed women and imposed 'fatwa' on music. This is barbaric," Abdullah Adan, National Union of Somali Journalists told IOL.

Militants who control swathes of the Somalia have banned music in the country. Somalia musical bands are unfastened, and their careers discarded, and most of illustrious musicians and artists are now hopeless.