This trend of young Muslim girls wearing the hijab is disturbing 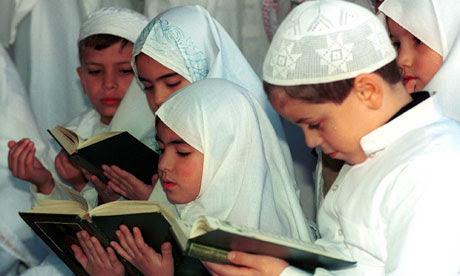 Anyone walking on the streets of Egypt will notice a phenomenon that wasn't so evident only a year ago: the increasing numbers of little girls (and by "little", I mean as young as eight years old in some cases) wearing headscarves and abayas. While this sight was previously confined to third-class trains and rural areas, it has now become increasingly common in cities and among well-to-do families.

In general, the age at which Muslim girls in Egypt begin to wear the scarf has dropped. Back when I was in high school, very few female students wore headscarves. Today, my younger brother (who is 15) tells me that almost all the girls in his middle school wear a scarf. It hasn't stopped there either, having caught on in primary schools.

The very sight of a little girl in a scarf is both disturbing and confusing. Adult Muslim women are expected to dress modestly so that men outside the family cannot see their bodies. But what is the point of a child or pre-pubescent girl wearing a hijab? It hints at what may be a disturbed (one is tempted to say diseased) concept of sexuality in the mind of the father who thinks his little girl should be covered up. What exactly is tempting about the body of an eight-year-old that needs to be covered?

Some suggest that I am overanalysing, and that the reason parents like their little girls to don the scarf is simply so they can "get used to doing the right thing from a young age". They compare it to how Muslim parents teach their children to fast until noon during Ramadan so that when they are older it won't be so hard to fast until sunset, or how fathers take their kids to the mosque on Fridays to get them used to it. We all know how hard it is to kick habits we were taught in early childhood. Getting a little girl "used to" the hijab effectively obliterates the "free choice" element by the time the girl is old enough to think.

The hijab is aggressively marketed as the proper attire for a respectable woman. That isn't new. What is new is that now even children are targets of this marketing. One need look no further than Fulla, the Middle Eastern version of Barbie, designed to suit Muslim values. When I recently stepped into a Toys R Us store in Cairo, it was quite shocking to see a Fulla doll clad in a headscarf and a full length abaya, the box proudly proclaiming "Fulla in her outdoor clothes", in effect telling little girls that there is only one proper way to dress outside the house.

Many defenders of the hijab point to the influence of "decadent western culture", endlessly criticising how western TV sexualises and objectifies women, though they fail to understand that they are doing they exact same thing to little girls when they constantly promote the hijab. If it is so important to cover up, there must be something worth covering up and hiding from men. Inevitably, little girls are taught to view themselves as sexual objects that must be covered up from an early age – and it is this culture permeating the minds of our younger generations.

I once heard the naive suggestion that dressing your daughter modestly would ward off paedophiles. On the streets, though, it seems more likely that it will simply lead to increased harassment. A 12-year-old in a scarf could pass for 16 to the casual observer, making her "woman" enough to be harassed.

On a more sentimental level, making a little girl wear a headscarf deprives her of her childhood. While other girls will be doing their hair or playing with Barbie or wearing cute dresses, she'll be doing what grown-ups do – wearing a headscarf and full length abaya.

Her parents will defend her right to wear it, saying that the girl chose it herself because some of her friends were doing it and she wanted to fit in, or to be grown up like mummy, much in the same way as a boy asks his father for a cigarette so he can be like daddy. But parents usually know better in the latter case.

Finally, I am sure that when this article is translated into Arabic and posted on Egyptian websites, the usual flood of comments will ensue; how I am anti-hijab, how I want to strip Egyptian and Muslim women of their modesty, how I want Muslim women to "walk around naked like western women", and so on. I tell them my view on the hijab is irrelevant. The issue at hand is: what exactly is the point of imposing a scarf on a little girl, and why is it becoming more common?