Beyond the veil: London's burka wearers go on the defensive 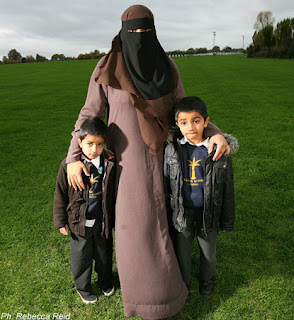 Last month, Tory MP Baroness Warsi withdrew from making a speech defending the burka on international TV; an independent girls school in Tower Hamlets was vilified for including it as part of its school uniform; pop star MIA turned up to a Los Angeles awards ceremony wearing one, and two high-profile public debates on its significance were staged by the Institute of Ideas in London. Yesterday, Cherie Blair, whose sister Lauren Booth recently converted to Islam, stoked debate by declaring her support for women who choose to wear the headscarf (though she does not support covering the face).

But just what is it about the burka and the niqab — two types of face veil, the terms are often used interchangeably — that has so captured public and political attention?

Statistics on the number of women who wear the niqab in Britain are difficult to verify. Belgium has reportedly recorded 215 burka wearers and France estimates the number at anywhere between 367 and 2,000 of its five million Muslims.

But, anecdotally, the burka on the streets of London has become more common. Knightsbridge is home to plenty of wealthy Arab women who wear the veil in public, while in pockets of east London, some Muslim women work and travel almost unnoticed in niqabs. But does that really mean the city is becoming more “radicalised”?

Shaista Gohir, executive director of the Muslim Women's Network UK, is unconvinced: “No. The niqab, in the first place, is a minor phenomenon. Yes, Muslims are displaying their identity more overtly since 9/11 and 7/7 but they've also come under heavier political scrutiny. The veil has almost become a spiritual and physical shield.”

Gohir is one of the few Muslim women I've met who defends the right of any woman to wear what she pleases but who also admits that “the niqab is a barrier to communication, community relations and integration”.

Belgium became the first European country to outlaw the burka and French legislation now dictates that it is a criminal offence “to conceal one's face in public”.

But a report published last month by the think-tank Civitas suggests that in Britain at least, the veil should be accepted as part of a modern British way of life and be judged by practicality, not ideology. In contrast to Italy, Spain and the Netherlands, where state bans are being considered, the Civitas report (titled Women, Islam and Western Liberalism) recommends that unless the veil physically “hinders a citizen's ability to perform their public civic duties”, women alone should determine what they wear.

It's a point made repeatedly by the scores of Muslim women in London I interviewed.
At Friday prayers in the East London Mosque, dozens of women and girls from Somalian, Bangladeshi, and Pakistani heritage arrive in a diverse array of Islamic dress.

A group of teenage Bengali-speaking girls, all wearing hijabs (headscarves), skinny jeans and high-street dresses, giggle in a collective huddle when I ask why they choose to wear the headscarf. “'Cos we're Muslims,” says 16-year-old Zainab Zaman, suppressing a “durr!”. “And you can tell that instantly. That's our identity, it's who we are.”

Mishal Akhtar, 23, a part-time hijab wearer who works for a fashion magazine, believes wearing a headscarf can “actually be a bit punk. In your teens, in London, it's fashionable and cool — it's another accessory. It also marks you out and makes you belong at the same time. So yes, the appeal is really obvious.”

Fatima Barktulla, 31, a cheery pregnant mother of three boys who was born and grew up in Hackney, elaborates: “I started with the hijab, but when I got married I wanted to wear the niqab … It isn't a rejection of society, or an attempt to be different. It's not a political statement either.”

Does she feel it might be perceived as such? “No woman I know who wears a niqab is doing it to make a huge point. It's a personal, spiritual conviction. And I know that the niqab is a virtuous option and it is not obligatory.”

Barktulla, an Arabic studies lecturer, says that taking up the veil simply allows her to feel closer to God. “It doesn't contradict my being British either,” she insists. “I love this country — it's my home. Mine and my husband's parents come from India but it's alien to us.

People ask whether we wouldn't be better off living in an Islamic country' but it's only because we're brown-skinned and not part of the indigenous population. What would you say to the white English convert whose family has been here for centuries? Where would they go?”

Modesty in Islam is key for both men and women. But most Islamic scholars agree that the adoption of the full-face veil among Muslim women is more to do with culture than religion. Its purpose is to diminish a woman's sexual allure.

Yet perversely, it is arguable that by wearing one a woman is defining herself as little more than a sexual object. While in Riyadh a burka would go unnoticed, in London, a veiled Muslim woman attracts attention. I ask Barktulla if she doesn't feel that wearing one here contradicts its purpose.

“It's a different type of attention though,” says Barktulla. “On a day to day basis, it's really not that problematic. I don't think people stare at me in London any more.”

Does she place any legitimacy in Angela Merkel's recent comments about the failure of multiculturalism? “If multiculturalism really is a genuine desire to allow people to express themselves in their different ways, then it works,” she says. “If the idea was to allow immigrants to have their traditions and hope their kids would be wholly assimilated, then it doesn't. I don't think that was the idea though. This is a liberal democracy.”

Amoola Ismail, a 26-year-old British- Somalian care worker whose beautifully made-up eyes are all I can see over our coffee in Aldgate, agrees: “The irony is that when people get hot and bothered about Islam and criticise it for oppressing women and forcing them to cover up, they forget that removing any woman's individual right to choose makes them oppressors too.”

Ismail believes it's not just patronising but chauvinistic for the debate on burkas to be conducted in the press and among politicians without involving the women who actually wear them. “We're not delicate little creatures,” she scoffs. “We don't need to be saved. We need to be heard if they want to take this debate seriously and stop using it as a weapon to attack Islam.”

Not everyone sees the issue as a “clash of civilisations”. “We are a new culture here,” says Dr Riffat Majeed, a GP from Watford. “We're very British Muslims. I don't identify as being Pakistani like my parents. Our generation is taking advantage of the fact that we're living in the information age. When you grow up in the West, you question everything. You want to find out who you are, where you fit in. Having doubts and getting answers to those questions is perhaps why we're more religious than the first generation.”

Majeed believes Muslim immigrants in the Sixties and Seventies, practised “a more cultural form of Islam”, whereas now their offspring are better-informed and more observant. Majeed has worn the hijab for 13 years and a jilbab (a full-length cloak) for almost the last decade, inspiring her mother to do the same. I ask if she ever feels restricted by her self-imposed uniform — whether she misses dressing up?

“It's not like you get locked away and you're like an old woman; I still dress up. We have a lot of family and social dos. Women are segregated outside of close family events so I get my hair done, have my nice outfit and jewellery on but I don't resent my choices. It hasn't limited me, it feels natural.”

Maryam El Hajbi, a 24-year-old British-Moroccan researcher working for the anti-extremism think-tank Quilliam, believes the bigger problem is “the way in which the debate has become politicised. The niqab has been taken out of context and is being used as an ideological tool, an excuse to talk about immigration, integration or the failure of multiculturalism.”

El Hajbi finds it difficult to understand the feminist position that many veiled women maintain on account of the niqab making them feel empowered, but respects their choice. “A state ban would be totally counter-productive. The only real issue is where women or girls — such as at the school in Tower Hamlets — are forced to wear it.”

The Madani School for Girls has so far refused to speak to the press about its policy — niqabs for pupils aged 11-18 are mandatory on the journey to and from school.

The headmistress, Mrs Amra Bone, tells me it might be time to set some facts straight: “First, this policy has been in place since 1991, when the school was set up,” she explains. “It's not new. Second, the uniform was already under review and subject to potential change before [the press attention]. The girls don't have to wear niqabs in school and lots of them don't put them on until they reach the school gates.”

Mrs Bone admits she doesn't personally agree with the niqab but she says the school will continue its review with staff, students, parents and its management committee and will not be pressured by headlines.

Even so, the controversy around the veil remains. A guest at a debate on religious tolerance at the Battle of Ideas conference last weekend, said the sight of women wearing them in London made her feel violently sick. Another questioned whether moral relativism and liberalism were acceptable excuses to ignore the so-called “threat [burkas] pose to civil society”.

Whether one agrees with the choice London Muslims make (when they do choose) to cover their faces or not is irrelevant; protecting the freedom to allow that choice is a basic tenet of British life.