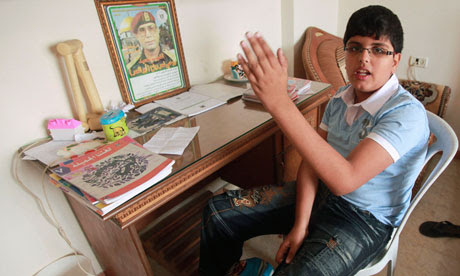 Majed Rabah, nine, who has been left 'traumatised' by the incident. Photograph: Suhaib Salem/Reuters

Two Israeli soldiers who used a nine-year-old Palestinian boy as a human shield were given suspended sentences and demoted after being convicted of "inappropriate conduct".

The unnamed soldiers, from the Givati Brigade, ordered Majeh Rabah, from the Tel al-Hawa neighbourhood in Gaza City, to check bags for explosives in January 2009, towards the end of Israel's three-week offensive.

The pair, who completed their compulsory military service 18 months ago, were convicted last month after a closed military trial that became a cause celebre among soldiers who claim they are being victimised following international criticism over Israel's actions during the war.

The Israel Defence Force handbook forbids the use of human shields, known as "neighbour procedure" .

Both soldiers were given three-month sentences suspended for two years and were demoted from staff sergeant to sergeant. They had faced a maximum of three years in prison. The military judges said the soldiers did not have immunity for their actions but the court could not "ignore the difficult conditions in which fighters sent by the State of Israel had to operate".

The sentence – described as "light" by Army Radio – was criticised by the boy's mother, Alaf Rabah. "This is a scandal that just encourages others to continue in this behaviour which sends a negative message to both the victims and the soldiers," she told the Ynet website. The family is considering a civil action.

The soldiers' lawyer, Ilan Katz, said he was satisfied with the outcome, adding that it showed a criminal trial was inappropriate.

"We could have reached a settlement without having to put the [soldiers] through this ordeal ... We need people like these in the military," Katz said.

Majed was among dozens of men, women and children who were sheltering in a basement when the soldiers forced him to open a bag at gunpoint, according to the boy's affidavit, given to Defence for Children International (DCI), which filed a complaint against the Israeli army.

"I thought they would kill me," Majed said. "I became very scared and wet my pants. I could not shout or say anything because I was too afraid ... I opened the bag as he pointed his weapon directly at me. I emptied the bag on the floor. It contained money and papers. I looked at him and he was laughing."

The boy said he was grabbed by the hair and slapped across the face by a soldier when he could not open a second bag. "He then shot at the bag ... I thought he shot at me, so I shouted and put my hands on my head ... Another soldier said: 'Go to your mother.' I ran to my mother and hid in her arms. 'I wet my pants,' I said to her. 'It's fine,' she said."

The child has been traumatised since the incident, according to his family, and has been demanding that the door of their home is locked at all the times.

Gerard Horton, of DCI, said: "The sentence shows that the army and military justice system does not take its obligation to protect civilians seriously."

He said the case was brought under pressure following the UN's Goldstone report into the war, which accused both Israel and Hamas of committing war crimes. "If there's a lot of pressure, and people are looking, [the army] will do something but there's no substance to it."

Sarit Michaeli, of the Israeli human rights group B'Tselem, said: "Although individual soldiers do bear responsibility if they have violated rules, this has to be accompanied by systematic examination of issues of policy – such as what constitutes a legitimate target, open fire regulations, types of weapons used and the targeting of public buildings. The main issues of concern that we have raised have not been dealt with."

The ruling was welcomed by Israeli politician Otniel Schneller. "The judges showed the appropriate level of balance between meticulously following IDF orders and Jewish moral values and the responsibility for maintaining the initiative and decisiveness of IDF soldiers when in battle," he told Ynet.

Scores of people, including soldiers, demonstrated outside the court during the trial wearing T-shirts saying "We are all victims of Goldstone."

Around 1,400 Palestinians and 13 Israelis were killed during the Gaza war.