Educated, Glamorous and Wearing A Hijab 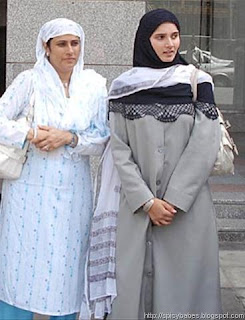 KARACHI, Pakistan, Nov 18 , 2010 (IPS) - They are young, educated, urban women who frequent cafes, shop at ritzy fashion outlets, and go to yoga classes whenever they have time off work.

But they also wear the ‘hijab’ or Muslim headdress, which even in this mainly Muslim South Asian country makes them a target for derision in far too many instances.

Indeed, while more conservative clothing like the ‘burqa’ – which leaves only a woman’s face (though at times even the eyes and hands) uncovered – have been worn here for centuries and accepted as South Asian garb, modernists consider the ‘hijab’ as a dress more in keeping with Arab culture. Both however are for the same purpose of purdah, or the shielding of women from public observation by means of concealing clothing and separate physical spaces.

Unfortunately, too, what some Muslim women wear as reminders of their choice to be modest and humble have been associated instead with extremism, even though they feel that covering themselves and being modern are not necessarily in conflict with each other.

As a result, Pakistani women who don the veil and also the ‘abaya’ (a black outer garment that also covers a woman from neck down), have been called derogatively as "ninjas", "fundos", "Taliban", or "mullani" (female version of mullah).

Many seem uncomfortable around them. One hijab-wearing journalist says that when she applied for a job at a media company, her interviewer looked at her from head to toe while asking if she would be able to fit in the firm’s "liberal" environment.

Ansa Khan, 40, says that a bank refused to let her open an account there because she had her face covered. According to Khan, the manager said the bank policy demanded that the person opening the account must reveal his or her face, and there were no female staff at the branch at the time.

Farahnaz Moazzam, who covers her head and wears the abaya, observes, "People are more conscious and cautious when I am around. They laugh less and whisper more." And unless she smiles first, she says, she is bound to be surrounded by serious faces.

Says Moazzam, who gives Koranic lessons to women: "It’s interesting how, over the years, people have asked me questions like, ‘Do you crack jokes?’, ‘Do you make mistakes?’, ‘What do you and your family talk about?’, ‘Do you ever get angry?’, ‘Do you watch TV?’"

For sure, these women find such an attitude ironic in a country where females are expected to dress modestly in the first place. But some like Khan concede that their choice of clothing may remind people of unpleasant events.

Among these is a 2007 incident in Islamabad in which about 6,500 hijab- and abaya- wearing women of Jamia Hafsa, a seminary attached to the Lal Masjid, had challenged the government’s authority. A bloody army operation ensued, resulting in the death of many students.

At the same time, the incessant images in media of women clad in abayas and burqas in more conservative societies like Saudi Arabia and Taliban-era Afghanistan seem to have led many people here to associate such clothing with ultra- conservative views.

The mildest expectation of women like her, says the hijab-wearing journalist, is that they are "as perfect as (angels)". Moazzam agrees, saying, "They think too highly of me because I am trying to follow one command of my religion that is outward."

Touba Naeem, who has been wearing a hijab for the last eight years, says that people take one look at her attire and assume that she is "not fun". Single at 27, she adds, "Hijab can be a potential detriment (to) good marriage proposals."

Interestingly, most of these women say their worst critics are not strangers, but members of their family. One woman says that her father and older brother "opposed initially" her decision to don a hijab. Another says that when she started wearing a veil, "my older brother would pull it off my head in gatherings".

One young socialite who began wearing a hijab after her marriage says that her husband at first was hesitant in accepting her veil. But all hell broke loose when she started to wear the abaya, she says. "He refused to introduce me to his friends or sit with me at social gatherings, as if he was ashamed," she recalls. Over the years, she says, her husband has accepted both her hijab and abaya.

Yet for all their hardships that have come their way because of what they want to wear, these women remain adamant about their dress of choice. Aside from considering it as an offering to Allah, the women say dressing the way they do liberates them from worries about their looks and allows them – and other people – to concentrate on more important things.

Comments Moazzam: "I don’t feel like a product or an object anymore. Now people notice my smile, my conversation, and take me more seriously."

The socialite, for her part, says that she did weigh the pros and cons of wearing a hijab and concludes: "The discomfort of not wearing it outweighed the joys of showing off. I am happier doing it."

Moazzam does say, however, that women who cover themselves up should not treat life as "a prolonged bad hair day".

"You should look your best and maintain yourself," she says, "for your family and most importantly, for yourself."

"Fashion, why not?" says Moazzam. "I am as normal as any other woman. I have, however, come to a point where I am covering up my fashion statement, jewellery, haircut, in front of the crowd. But I still do it and enjoy it."