Tale of gay woman forced to marry to protect 'honour' 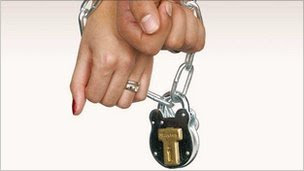 "I took off my hijab, and I threw it on the floor and my brother got really mad. It's the worst thing I could have done to offend my religion, aside from burn or tear the Koran.

"My mother, she kind of stood still, and started listening, and it was very liberating that she finally wanted to hear what I had to say.
"I told her about my sexuality and I said 'that's right, I do meet girls, and I love it' and I told her that she had been hurting me really badly, and I will never forgive her."

Now 20, Reviva - not her real name - recounts the day she finally came out to her family, her pupils flash and the flat, matter-of-fact delivery of her story-telling becomes briefly animated.
This, you realise, is the pivotal moment in a disturbing journey of self-discovery which encompasses family estrangement, exorcism, and attempted suicide.
Like hundreds of young men and women in Britain, Reviva was forced into marriage in spite of her sexual orientation, and still carries deep psychological scars from years of torment at the hands of her parents.

Rising trend
The government's Forced Marriage Unit (FMU) has received hundreds of calls from young gay men and women - mainly men - who fear they are going to be forced into marriage by their family, against their will.
This year, the FMU has dealt with 29 confirmed cases of forced marriage involving gay men and women. Last year, the unit offered support and advice to nearly 1,700 cases in total.

Just how many of those involved lesbian, gay, bisexual or transgender (LGBT) victims is unknown, because not everyone is willing to divulge their sexuality. However, it is thought this emerging trend is just the tip of the iceberg, as more gay men and women seek assistance.
When arranging to interview her for 5 live Investigates, we asked Reviva if she would like to bring a friend for support. But this attractive student, with a hint of Goth, opts to come alone, preferring to keep even her closest friends in the dark about her troubled past.

As she admits, "I'm unable to show emotion, I'm unable to trust people. The only person I really trust is myself. I am unable to be vulnerable with a person, I'm unable to feel a lot of things."
Born in the Middle East, but schooled in Britain, Reviva's difficulties began in adolescence when she became aware of being attracted to girls rather than boys.
"The first kiss I had, I was around 12," she recalls.
"It was always kisses in the playground, and kisses in the gym. With girls it was always perfect. It was always nice. It wasn't something I was ashamed of. It was beautiful."

Not for discussion
Aware that her parents had deep religious and cultural objections to homosexuality, Reviva gently tried to make them aware of her situation, but was quickly rebuffed:
"I tried to introduce it to them, because I knew it was a thing you don't talk about. It's forbidden. But once you mention 'homosexual' the discussion is over. You can't go into detail about it."
Far from accepting the situation, Reviva's parents set up weekly meetings with eligible bachelors - and reacted with violence when their teenage daughter refused to play along.

"The worst thing they tried was burning my hand on the stove. Anything they could grab, they'd hit you until you'd sort of pass out.
"They always tried to hit me where it couldn't be seen, to hide the scars. Because don't forget I was meant to get married, so I was meant to have skin that isn't damaged."

Reviva says she attempted suicide several times, knowing that she could never satisfy her parents, for whom she reserves an unmistakable venom.
While she understands the roots of their traditional views, her simmering anger betrays the belief that when all is said and done, her home should have been a refuge - not a place of emotional torture.

In a desperate attempt to force the situation, her father even signed her away in an Islamic marriage to a man in another country, who she had never met.
Reviva, who was still at school, used her impending exams as a delaying tactic to ensure the relationship was never consummated and it was ultimately annulled.
Far from ending, her ordeal intensified. The troubled teenager was taken to her grandmother's house in the Middle East where, as she recalls with a chilling lack of emotion, her parents tried persuading her to take her own life.
"I was damaging the family honour. I was making the family looking like a modernised, westernised, filthy family. So what they wanted to do is get rid of what is damaging the honour.

"They put you in a room on your own, I don't get any food, or any water, and I have to just sit there and wait to die or kill myself."
To aid the process, a gun, a knife, and pills were left in the room, along with a can of petrol and a box of matches. In her view, Reviva says it would have amounted to murder, not suicide, should she have decided to kill herself.
"But I wasn't in a situation where I felt I have to end my life. Even if I was, I wouldn't have done it the way they wanted me to do it."
Her refusal to give in led to further action from her family, as they sought to "cure" her of her homosexuality.

"They tried a few exorcisms" she deadpans, as if having evil spirits cast out was nothing more extreme than a routine dental check up.
This intense young woman briefly lightens up and punctures her solemn tale with a vivacious smile:

"It isn't like The Omen, it isn't as dramatic. You lay on a prayer mat, and somebody who is very religious, will read several verses from the Koran.
"It's very frightening because everyone is scared of being possessed by something, and then you think 'maybe I am?' because I have desires and thoughts that my parents think are wrong."

After this morale-sapping ordeal, Reviva briefly tried to come to an accommodation with her parents' views and dutifully studied the Koran.

Reviva's family then returned to England but not long after she found one-way plane tickets for her and her father and she realised he was trying to marry her once more - again, to a man she had never met.

She contacted the Albert Kennedy Trust - a charity which helps vulnerable LGBT teenagers seek refuge.
The trust has considerable experience helping LGBT victims of forced marriage and offers advice through its website, 'LGBT Forced Marriage'.
The Albert Kennedy Trust contacted the police and put them in touch with Reviva. Fearing for her safety, they gave her 15 minutes to gather her belongings and flee the family home.

Even then, there was a final dramatic twist as the young woman was taken hostage by her mother and brother, leaving the police to force their way in.
"They had to break the door and come in, because nobody was opening the door for them. And they went in, and my mother and my brother cornered me in the kitchen.
"My brother broke a glass to make sure I didn't leave the house alive. And they had to wrestle my mother and my brother, and… I was gone."
And so Reviva is free - or at least as free as anyone with her history can be.
Already many of the physical signs of her torment have started to heal, but mentally it will take much longer.

"The worst thing is the emotional side of it - knowing your parents think you're not worth anything.

"Scars always fade but knowing your parents hate you? That doesn't change."