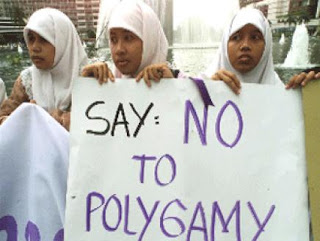 Men in polygamous relationships find it difficult to meet the needs of all their wives and children, and the result is unhappy and cash-strapped families, according to a landmark Malaysian study.

Polygamy is legal for Muslims, who make up more than 60 percent of Malaysia's population, allowing Muslim men to take up to four wives.

But activists and women's groups say polygamy is cruel and has deviated from its original purpose in Islam, which was to protect widows and orphans.

A study by advocacy group Sisters in Islam (SIS) found that the majority of first wives and children in polygamous families were unhappy with the arrangement.

Husbands and junior wives gave a more positive response, according to the study which backed activists' views that first wives are often forgotten after a man creates a new family.

"The husbands are the most advantaged in terms of fulfilling his desire and satisfaction in life. He has access to more than one sexual partner every day or night while the wives take turn," the study said.

According to preliminary data, more than 90 percent of the 523 children in households interviewed vowed not to enter into polygamy themselves, and two-thirds of first wives were against the practice.

"Generally, it is due to the fact that their right to demand (time and money) from their husband has decreased because their father now has another family," SIS researcher Syarifatul Adibah Mohamad Jodi told AFP.

"Despite some women saying they are not happy in the marriage, they have to accept it and they are resigned to it. They are in a vulnerable position -- financially or emotionally," she said.

SIS estimates that up to five percent of marriages in Malaysia are polygamous, a figure that has risen as rules limiting multiple marriage have been watered down over the years.

However, husbands were not entirely happy with the situation, either. Many of those surveyed said they found it "most difficult to fulfill the needs of the first wife and their children".

The study, which involved extensive interviews with 1,235 individuals from polygamous families, will be formally published next year.

SIS hopes it will trigger a change in legislation that allows the practice to flourish in Malaysia.

Adibah said that reforms should include ensuring that first wives are not cut off financially and that their consent is required before their husband enters into a second marriage.

Critics of polygamy say that such laws, where they exist, are frequently ignored in Malaysia.

Polygamy is illegal for non-Muslims in the multi-ethnic nation, which is also home to large ethnic Chinese and Indian communities.