Muslim schoolgirls show that faith and fashion are not incompatible 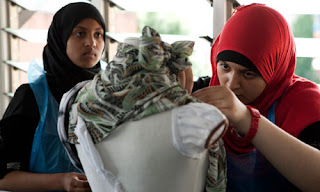 In a first floor classroom in the Hackney campus of the London School of Fashion a small group of young schoolgirls are wrapping clothes on to tailor's dummies.

They are using conventional clothes in unconventional ways – turning ties into belts and baggy T-shirts into neckwear. The idea is to challenge traditional notions of normality in fashion.

The approach is a common one for aspiring designers but it feels especially appropriate for the 20 assembled schoolgirls, all of whom are British and Muslim and all of whom are in traditional Islamic dress.

The girls are taking part in an initiative called Faith and Fashion that is using the widespread fixation of Muslim women's dress as a starting point for a discussion on how to create fashion that reflects a British Muslim sensibility. Sophia Tillie, the 28-year-old white, British woman who runs the scheme, converted to Islam while at university. She is now engaged in trying to examine how the concept of modesty – so essential to Islamic thinking – can be interpreted differently depending on the context of time and place.

"The Saudi tradition of wearing the niqab is very literalist," she explains, "and it is part of a puritanical movement that is reductionist in its doctrine. But reading more widely I was struck by the flexibility of Islamic thinking and that was what this initiative seeks to encourage."

The scheme is backed by the Three Faiths Forum, an interfaith organisation that works at grassroots to support harmony and confront prejudice between different religious communities.

For Tillie the media obsession with the burqa obscures the richly diverse ways that Muslims throughout the centuries have chosen to dress. "Banning the burqa will send it underground and oppress further the women who are still perceiving it as the only way to dress to be a fully observant Muslim. The reason I set up Faith and Fashion was to create a safe space where we could look at why some Muslim women have chosen to interpret some verses of the Koran to support the burqa and by opening up that space that allows opportunities for other choices and other interpretations."

Among the girls who are busy wrapping a pale blue pair of trousers around the neck of the mannequin is 15-year-old Tasnem. "I've always been really interested in fashion," she says. "I like stuff that is funky, if I was wearing a hijab I would like to wear a massive bow with it."

The girls are all competition winners having beaten more than 100 other girls by producing portfolios which featured drawings of clothes they had designed which expressed their British and Muslim identities. The girls all attend Islamic schools in different parts of London and some of their portfolios included poetic explanations of their decision to wear the hijab. "Allah doesn't look for our outer but our inner beauty," reads one verse. "Men walking down the street, 'Oh she's a cutie'/Women wear the hijab for protection/Not for affection/We have education/And we want an occupation."

For the young women involved there is no contradiction between being interested in fashion and being observant Muslims. Says Nadaya: "I was on the bus and someone asked me why I was wearing a hijab – it frustrates me because they don't know anything about me and yet they are judging me."

Another of the young women, Musafa, 15, was dressed in a full veil that obscured everything except her eyes. She was also wearing an electric green jacket. "I like to dress nicely and I like to express myself through clothing," she says. "People think that I must be forced to wear this but I came to the decision on my own and because all my five sisters and my mother wear it."

During the three days that they are at the London College of Fashion they will develop design and IT skills and well as being given advice by design experts. It is the sort of training that they would usually never have the chance to receive in their Islamic schools.

"The great thing about this course is that the girls are learning that dressing modestly does not have to be boring," says Hassaanah, a teacher in an Islamic school in Tooting Bec.

"We do study aspects of identity at our school but the aspect of understanding other religions and their history of modesty has been new."

By the end of the afternoon the three tailor's dummies stood in their new outfits. "This was my chance to really be creative," said Tasnem proudly. "It was so great to be able to meet other Muslim girls who were also into fashion."