'Leave your job or we will cut your head off your body...' 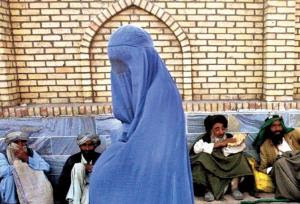 With violence on the rise, Afghan women are terrified at the prospect of a deal between President Karzai and the Taliban

Women in Taliban-held areas of Afghanistan say they are once again being threatened, attacked and forced out of jobs and education as fears rise that their rights will be sacrificed as part of any deal with insurgents to end the war in Afghanistan.

Women have reported attacks and received letters warning of violence if they continue to work or even contact radio stations to request songs.

One female teacher at a girls' school in a southern Afghan province received a letter saying: "We warn you to leave your job as a teacher as soon as possible otherwise we will cut off the heads of your children and will set fire to your daughter."

Another woman, Jamila, was threatened in August 2009, in a letter bearing the Taliban's insignia when she was working for a local electoral commission. It said: "You work in the election office together with the enemies of religion and infidels. You should leave your job otherwise we will cut your head off your body."

Jamila ignored the letter, but days later her father was murdered. She left her job and moved house.

Activists are fearful that their rights will be sold out in a deal between the Taliban or other insurgent groups and the US-backed Afghan government. They believe that if the Taliban is given a share in power, women will again be reduced to a condition close to slavery, as when the Taliban ruled most of Afghanistan in 1996-2001. Then, women could not leave their house without a close male relative and had to cover their faces and bodies with an all-enveloping burka or chadori.

Women, who had made up 70 per cent of teachers and 50 per cent of civil servants, were banned from working except in healthcare. Even as medical workers, there were severe restrictions and many women died either in childbirth or from disease because of lack of medical attention. The UN estimated that only 3 per cent of girls received primary education under Taliban rule.

With the war reaching a stalemate over the last year, Afghan and foreign leaders have prepared the ground for talks with insurgents by claiming they are more moderate and pragmatic than the Taliban government overthrown in 2001. The head of the International Security Assistance Forces' reintegration unit, Lt-General Graeme Lamb, said: "Who are these Taliban? They are local people. The vast majority are guns for hire; not fighting for some ideological reason."

The idea that the present day Taliban is less hostile to women than the old is contradicted by the experiences of women in Taliban-held districts. A report by Human Rights Watch – based on interviews with 90 women in districts largely held by insurgents in four different provinces – shows that women are being deprived of all rights.

The report, entitled The 'Ten Dollar Talib' and Women's Rights: Afghan Women and the Risks of Reintegration and Reconciliation, is released this week. It says the belief that new Taliban has emerged influenced by money rather than ideology is wrong.

It criticises the idea of the "Ten Dollar Talib" who fights for money, as an attempt by US and Nato forces to make power-sharing with them more palatable to western audiences who had previously been told they were an enemy to be defeated. Hostility to women is shared by other insurgent leaders as well as the Taliban. The strongest rebel force in the provinces south of Kabul is the Hezb-i-Islami, which Western and Afghan leaders have spoken of as a group that might be tempted to join the government.

The movement's leader is Gulbuddin Hekmatyar, whose first political act was reportedly to throw acid in the faces of unveiled female students at Kabul University in the early 1970s.

The HRW report is the first time that repression of women in Taliban- controlled areas in Afghanistan has been systematically studied. All the women interviewed – who are referred to by pseudonyms for safety reasons – said they had lost freedoms. In some cases, women have been killed.

On 13 April this year a female aid worker, Hossai, 22, was shot as she left the office of an American development organisation and died the next day. She had been threatened by the Taliban the previous week. Many of the threats are contained in letters delivered to the door at night – known as "night letters" – or left at the local mosque. Soon after Hossai was killed, Nadia – who worked for an international NGO – got a letter telling her to stop working for infidels and "in the same way that yesterday we have killed Hossai, whose name was on our list, your name and other women's names are on our list". Sometimes the same letter is sent to a number of women. In late 2009, in Kapisa province east of Kabul, women were warned not to ring up radio stations and request songs. They were told if they did they would be beheaded or acid thrown in their faces.

Many women have been forced to give up their jobs and stay at home, even though half the population earns less than $2 a day and there is a chronic lack of employment.

Girls' schools, which sprang up again after 2001, are once more being ordered to close. In Kunduz province in the north, the shadow Taliban governor sent out orders that no girls were to be educated past puberty. One threatening letter delivered to a school read: "You were already informed by us to close the school and not mislead the pure and innocent girls under this non-Muslim government."

In Kunduz these threats were reinforced by arson, rocket and bomb attacks. There have also been outbreaks of unexplained sickness at several schools, which could be the result of mass poisoning. One Taliban spiritual leader explained the targeting of girls' schools: "We are opposed to un-Islamic education for women. We close those schools that teach adultery, nudity and un-Islamic behaviour."

Women active in politics have been targeted and a number of the most prominent assassinated. The failure to catch the killers discourages other women from playing an active role. The Afghan government has also been ambivalent in its attitude to the issue.

The report says that women should be involved and able to protect their interests in any negotiations about reintegration or reconciliation with the Taliban. One female member of parliament doubts this is possible because "the Taliban would rather see a woman die in the streets than go to a restaurant to get food if men were there. These are the kind of people we're talking about".

Letter of the law

"You are working with the government. We Taliban warn you to stop working for the government otherwise we will take your life away. We will kill you in such a harsh way that no woman has so far been killed in that manner. This will be a good lesson for those women like you who are working. The money you receive is haram [forbidden under Islam] and coming from the infidels. The choice is now with you."