Let women judges do their job 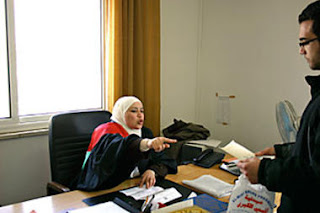 We do need to look at justice with a gender perspective. It is always women who suffer, both from injustice and society’s blindness towards it.

IT SEEMS to be the unchanging lot of women in Malaysia. First we are elevated, and then we are brought down to earth with a thud.

When the first women syariah judges were appointed this month, Muslim women were elated. At last, not only are women recognised for their ability to sit on the syariah bench but also perhaps now we can expect better justice for women in the syariah courts.

The first uneasy twinge came, for me, when one of the new judges said that she wanted to show that just because she was female it didn’t mean she would be biased towards women.

While, yes, justice is supposed to be blind, this statement made it sound that she is determined to prove her credentials by bending over backwards not to favour women at all. Given that women have hardly found justice in the courts all this time, this is disappointing.

Then came the whammy. It seemed that only after appointing them, a syariah court panel, consisting only of men, was being set up to decide what the women judges could rule on.

How about that? Give someone a job and then decide what she can do. Was this just incompetency or an attempt at ensuring that they are kept “in their place”?

It is a fact that women have been getting short shrift in the syariah courts, whether in getting due compensation in divorce cases for themselves or their children, in inheritance cases and many others.

Even when courts have ruled in their favour, for instance in ruling that men have to pay maintenance for their children from their ex-wives, rarely have these been implemented.

As a result, many women and their children are left in dire poverty. Is that justice?

We do need to look at justice with a gender perspective. Otherwise “justice” will always be seen from a male perspective because it is generally men who make the laws. Or in the case of religious rulings, it is men who interpret them.

It would be nice to expect men to simply be gentlemanly and ensure that the mother of their children and their progeny are well cared for after divorce. But this rarely happens. Thus someone needs to stand up for women. Invariably this should be a woman who truly has justice in mind.

Not that this always involves only divorced women. The recent study on the impact of polygamy on families by SIS Forum Malaysia shows that generally polygamy does not lead to happy families.

First wives and their children generally suffer most, both in terms of attention from their husband and father as well as in terms of standard of living — after their husbands had taken on another wife, 44% of first wives were forced to go out and work just to ensure the survival of their family.

Considering that men are only supposed to take on another wife if they can afford to support both, this evidence, culled from interviewing over 1,200 families, shows they are coming up short.

Not that second wives and families are faring better either. All families complained about the amount of time their shared husband and father had to spend with them.

Equal time and attention is simply not humanly possible. As a result, there was dissatisfaction all round when birthdays, anniversaries, school events are missed.

Men may think of polygamy as their “right” but it is a stressful one, if nothing else.

It is always women who suffer, both from injustice and society’s blindness towards it. Heaven knows what we need to do to make society take violence against women seriously enough.

We can rightly point to many countries to show how our women are so much better off than theirs. But the reality is, unless women are protected from violence and can seek justice in the courts, such “equality” that we enjoy can only be superficial.

So let those women judges get on with their jobs. After all, their counterparts in the civil courts have been doing so for a long time.