Breastfeed Your Baby in a Hijab: Public Breastfeeding in the Middle East 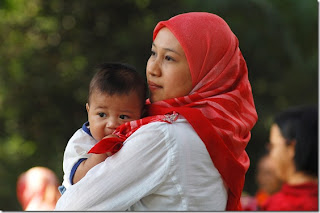 Many Muslim women cover up with a hijab. If you are breastfeeding a baby, this Muslim American blogger recommends buying a special coverup. Here in the Middle East, modesty among religious Christians, Moslems, and Jews is often associated with inhibitions about nursing in public. But that isn’t necessarily true.


In my years counseling nursing mothers, I’ve found that modest dress and nursing in public are separate issues. Women covered from head to toe can be seen nursing their babies on a park bench, while some mothers in halter tops wouldn’t dream of nursing in public. In countries like the US, where babies are primarily bottle-fed, breastfeeding mothers are frequently asked to leave public places or cover up while billboards with exposed breasts are everywhere.

Breastfeeding is an important part of greening the planet. Manufacture, transport and disposal of formula, containers, and bottles create pollution and use extra water resources. Breastfeeding, and supporting breastfeeding mothers, is one of the greenest things you can do. But in many parts of the world, discomfort about public breastfeeding remains a significant barrier to higher breastfeeding rates.

If a mother needs to find a private place to feed her baby every time she goes out of the house, she’s likely to wean early. One mom told me that when her oldest nursed every three hours, she was able to do errands in between feedings. Her second child nursed more often, so she weaned him to formula to avoid nursing in public.

There is a wide range of attitudes about public breastfeeding in Middle Eastern countries. In traditional societies, breastfeeding is generally the norm. Islamic law requires feeding until age two, and some interpret Jewish law to require it as well. In Jordan, women stay inside with their babies for close to a year.

There may be other reasons that public breastfeeding is rarely seen. In many traditional cultures, women are segregated to begin with so the issue of public breastfeeding does’t come up. In some cultures it’s acceptable to nurse in front of male relatives but not strangers. In stricter Islamic regimes, like Iran and Saudi Arabia, women are never seen breastfeeding in public, whereas in Jordan it is fairly common.

There are many products designed to help a mother nurse discreetly including aprons, cover-ups, and clothing with special openings. But if the mother wears a loose shirt that can be pulled up, or a sleeveless t-shirt under a button-down shirt or jacket, the baby will cover any exposed parts of the mother’s breast and torso. Not all babies like to nurse with something over their head. Of course mothers can nurse privately if they choose, but they shouldn’t be required to. Offended bystanders are free to move or look away, instead of disturbing the mother and baby. Since a mother’s first priority is to protect her child, she is not in a position to defend herself if attacked or criticized while feeding.

Get involved – Support Group for Muslim Breastfeeding Women on Facebook