Being a woman in Pakistan 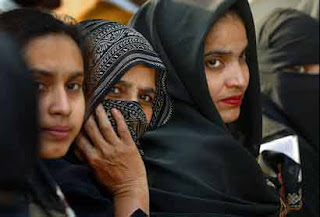 It is not easy being a woman anywhere in the world but it is a tad more difficult being a woman in Pakistan. Last week, we saw two gang rape victims in headlines again for all the wrong reasons.

Mukhtaran Mai was reportedly threatened by a sitting MNA from treasury benches, Mr Jamshed Dasti, to settle the ‘dispute’ outside the court and let go of the criminals who have been sentenced earlier. For starters, it was not a mere dispute. It was a heinous crime, perpetrated against a helpless woman. The criminals were awarded punishment after a long probe yet the parliamentarian justifies defending them by saying that the court awarding the punishment were pressurised by anti-Islamic lobbies. Forget taking any serious action, the sad reality is that although the MNA is in contempt of court, neither the government, nor the opposition parties issued condemnation against his threats to a victim who has been battling it out for eight long years against all odds.

Kainat Soomro, a minor who was gang raped three years ago, is still fighting her case in the court of law. Her older brother, who was fighting the legal battle with her and was abducted three month ago, was found dead a few days back. The murder clearly was a message from the culprits to Kainat Soomro and her family that they too will face a similar fate if they do not take back the case.

Crimes against women are not exclusive to Pakistan, what makes them more painful and inhumane is lack of judicial recourse for the victims. There are no systems and procedures in place where women can access justice without spending a lifetime and fortune in courts, facing a multitude of threats and social ostracisation.

Aqsa Parvez was a high school student in Toronto who was murdered by her father and brother for not wearing a headscarf in 2007. Similar crimes go unpunished in Pakistan but not in a country where rule of law exists for all its citizens, including underage girls. The prosecution was taken up by the state and Aqsa’s father Muhammad Parvez and her brother Waqas Parvez, who pleaded guilty to second-degree murder, were sentenced to life imprisonment, with no eligibility for parole until 2028.

Those who have seen Harry Potter films would be familiar with the character of Padma Patil, a witch at Hogwarts. The character was played by an actress of Pakistani origin Afshan Azad. A few weeks back, Afshan was beaten and throttled by her father and brother because she was heard talking on the phone with her Hindu boyfriend. Although they used violence against her, Afshan still loves her family and is pleading for violence charges to be dropped against her father and brother because she does not want them to go to jail. However the prosecution services in England takes these matters very seriously and intend to proceed with the case even if the victim retracts the statement.

Our penal code is inherited from the days of the Raj, if they can modernise the legal system and ensure that no pressure on the victims can retract criminal charges, so can we. If our laws had been friendlier to the victims, Kainat’s brother may still be alive. If we had sent better people to the assemblies and not people who openly flout the law and threaten rape victims, we may have been able to come up with better legislation. If we had better legislation, we may have made an example out of some criminals like Canadian courts did with Aqsa Parvez’s father and brother. If only.
source
Posted by Zafar Khan at 10:03