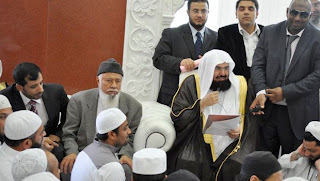 JEDDAH: The imam of the Grand Mosque in Makkah told the world not to be afraid of Islam and Muslims, adding that Islam represents a message of peace, goodness and tolerance.

Sheikh Abdul Rahman Al-Sudais made the announcement while delivering his Friday sermon at the Tauheedul Islam Mosque in Blackburn, Lancashire, UK.

The new Tauheedul Islam Mosque is the largest in Lancashire and cost 3.5 million pounds ($5.37 million). Qatar's royal family provided an initial donation of 1.5 million pounds for the basic construction of the mosque, with the remainder generated from the Blackburn community. The community had outgrown the much smaller mosque, which was established at the same site in the 1960s.

In his sermon, Al-Sudais said: "Islam came to protect the interests of humanity, prevent evils and build bridges with all communities. It offers a great message of mercy and tolerance."

The Makkah imam urged Muslims living in Western countries to abide by the laws of the countries where they reside. "You should be a positive and constructive factor in the community you live and should not involve yourselves in activities that would undermine its security and stability," the Saudi Press Agency quoted Al-Sudais as saying.

Al-Sudais asked Muslims to learn from the life and teachings of the Prophet Muhammad (peace be upon him), who used to visit his Jewish neighbor. "When the Prophet died his armor was kept with a Jew as a security," he said, urging Muslims to establish good relations with non-Muslims. "This is the best way to attract them to Islam."

Al-Sudais said Muslims living in the West should serve as ambassadors of their religion. "You should uphold the great Islamic values while dealing with Muslims as well as non-Muslims and should not engage in any corrupt or unjust practices."

Al-Sudais hoped that the new mosque, which has taken six years to complete, would serve as a source of goodness, light and guidance for the entire mankind.

Lord Adam Patel, president of the mosque, emphasized the importance of the mosque. "In 21st century Britain, the role of the masjid is as important as it was at the time of our Prophet Muhammad (pbuh)," he said.

Patel said the mosque would work to advance the Islamic faith through the provision of a wide range of spiritual, educational and social services.

"Our vision is to become a center of excellence for Islamic learning and practice providing a beacon for both Muslims and other faith communities who wish to gain a deeper knowledge and understanding of Islam," he said.

He thanked Al-Sudais for coming to Blackburn all the way from Makkah to open the mosque.

The Makkah imam later visited an Islamic school for girls adjacent to the mosque. "Women have a great place in Islam," he said, urging Muslim men to take care to their women. "I am quite happy to meet Muslim girls living in this part of the world who uphold their religion and Islamic values with pride and wear the hijab. It does not prevent them from taking part in different fields of life."

He commended the school authorities for their efforts to provide proper Islamic education to their children.

Student Saeeda Patel, who welcomed Al-Sudais, described him as a model for millions of Muslims around the world being the imam of the Grand Mosque, which houses the Holy Kaaba to which Muslims all over the world turn when praying. "Our school, which was established 25 years ago, is one of the leading Islamic schools in the UK," she said. There are 430 students now. It is the only government-funded Islamic girls high school in the northwest of England.