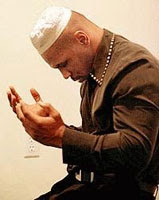 “Is it time for prayer?” This simple, sincere inquiry of Mike Tyson, the former boxing heavyweight champion, are the words that came to mind last week when I saw a photo of “Iron Mike” dressed in Ihram. Others may think of the strong-built former boxer as intimidating, cruel, or any other unpalatable adjective they’ve borrowed from the media or formed in their minds based on the small glimpses of him the television has given over the years.
But I have a different perspective…

Growing up, I was never a boxing fan. As a matter of fact, the sport scared me, and still does. But like so many other American Muslims, I was thoroughly proud of Muhammad Ali, who stormed the world with his “float like a butterfly, sting like a bee” slogan. Of course, Muhammad Ali was before my time, but that doesn’t mean I wasn’t on the edge of my seat when my father told stories of his triumphs, particularly his insistence on being called Muhammad Ali instead of Cassius Clay, and his refusal to fight in the Vietnam War, his famous words being that the Vietnamese “never called me nigger.”

The stories were made all the more notable knowing that my father knew Muhammad Ali personally. Having the opportunity to learn about the off-camera personalities of the likes of Muhammad Ali ingrained in my mind the human side of celebrities. From young, I understood the difference between the media-manufactured image of a person and the “real” person. This wasn’t due only to my father having worked with certain celebrities: My family itself lived that reality.

I imagine that my father, who was born “Clark Moore,” always knew the human side of fame. I remember him telling me and my siblings the sad story of how his first cousin Davey Moore lost his life in 1963 shortly after a fight against Sugar Ramos. The loss was so tragic and shocking that it even got the attention of the famous singer Bob Dylan who wrote the song “Who Killed Davey Moore?”

But for me, the story was deeper than Bob Dylan and the controversy of who was at fault. In fact, at that time my father shared the story, I had no idea who Bob Dylan was, or in fact, who Davey Moore had been to boxing fans. All I could think was, How sad, how terribly sad… My heart ached for my father, whose own father had helped train Davey Moore, and I wondered how their family had handled the loss, and if the tragedy could have been prevented somehow…

When Mike Tyson hit the news in 1991 due to an incident at an Indianapolis hotel that occurred between him and the beauty contestant Desiree Washington, I had no idea his conviction of sexual assault the following year would make him cross paths with my family. At the time, my father, who was a prominent community activist and a middle school biology teacher in Indianapolis, was doing da’wah work at the prison where Tyson would be held.

I remember my father expressing that perhaps Allah had a plan for Tyson through placing him where my father could teach him about Islam. I heard these words as I was serving my parents a tray of food, the television screen flickering images of a hand-cuffed, convicted Mike Tyson on his way to prison. At the time, I thought little of my father’s words. But they did make me think.
When my father began seeing Mike Tyson at the prison, he shared with our family some advice he had given Tyson after he accepted Islam: Know that although you’re in prison, it is the world outside these iron bars that is the real prison. It is sometimes easier to practice Islam in the confinement of a jail than in a world filled with so many distractions and temptations that threaten to shackle us in the very world that we are seeking refuge from through Islam.

These words stuck with me because they were so profoundly true. I thought of Malcolm X (El-Hajj Malik El-Shabazz) and how he became who he was only because his soul was given freedom in the confines of a prison. I reflected too on how the world, in reality, is a prison for all believers. As the Prophet, sallallaahu’alayhi wa sallam, said, “This world is a prison for the believer and Paradise for the disbeliever” (Muslim).

Although the world around me rushed to condemn Mike Tyson for his alleged crime, my heart held back because I really didn’t know what happened that day in 1991, and I still don’t. Honestly, the details of what really happened have never troubled me; the whole scenario just reinforced for me the importance of society following the guidelines that the Creator has prescribed for us.
But Mike Tyson’s tarnished image did not end with the controversy surrounding what happened between him and the beauty contestant. His image suffered severely thereafter due to events wholly disconnected from his 1992 conviction. Still, my heart held back from judging him harshly.

Whenever people would make derogatory jokes about him and his sins, I thought of the advice my father gave us once…
“Never think you’re above any sin, no matter how heinous that sin may be. Because the only thing that separates you from that sin is the mercy of Allah. In fact, it is when you feel the safest from a sin that you are most likely to fall into it, because you haven’t given yourself any protection against it.”

So when there’d be bursts of laughter around me about something or the other Mike Tyson had said or done, I’d grow quiet and reflective. I thought of Malcolm X and Davey Moore and Muhammad Ali. Who really knew these men? Who really knew their struggles? I certainly didn’t.
I wondered how people would view me had a television camera or microphone been in front of me whenever I made some of my most regretful mistakes…

During my late teen years, I was often home when Mike Tyson called my father from prison. Whenever my father wasn’t home, my siblings and I would take a message. I remember answering the phone once when I was home on break from college, and Mike Tyson was on the other end. I’d had a particularly trying year and was spending the time home engaged in self-reflection. I’m not sure if my heavy heart showed in my voice while I was taking the routine message, but for whatever reason, this time, Tyson asked if I was doing okay. I told him I was, and he proceeded to give me some advice about be patient through the struggles of life. I don’t remember his exact words, but I remember that they lifted my spirits. It also touched me that he had taken the time to share his own experiences with me in hopes of making me feel better. When I hung up, I reflected on my struggles as compared to his, and I realized that things weren’t so bad. If he could see the bright side of things from the confines of a prison, what about me in the comfort of my home surrounded by my family?

I last saw Mike Tyson when my family was invited to visit his home several years ago. I remember seeing him deeply engaged in a conversation with my father and his friends, and I saw that, in addition to generosity, Allah had blessed him with a sharp analytical mind, maashaaAllaah.

I remember, too, that in the middle of one of these deep discussions about world issues and Islam, he turned to my father and said, “Is it time for prayer?”
My father, immediately reminded that it indeed was, stopped talking and stood to prepare for Salaah, saying, “Yes, it is.”

I, along with my mother and sisters, lined up behind my father, Mike Tyson, and a few other brothers; and we stood shoulder-to-shoulder asking Allah to guide us on the Straight Path…
This is the last image I have of Mike Tyson—bowing in prayer.
When I saw Mike Tyson in the news last week and learned that he was performing ‘Umrah and visiting the Prophet’s masjid, I was moved and felt extremely happy for him. I recalled his uplifting words to me when I was feeling down so many years ago. I recalled his generosity thereafter. And I recalled the question he’d asked last time I saw him.

Is it time for prayer?
As I saw the media images of him in Ihram, my eyes filled with tears, as I remembered the kindness and struggles of my brother in Islam. And I raised my hands in supplication, asking Allah to forgive him, have mercy on him, and keep him firm.
And I thought, Yes, it is time for prayer.
For us all.
May Allah put love and mercy in our hearts toward one another, and may we find contentment and joy in Prayer. And may He take our souls in a state that is pleasing to Him.