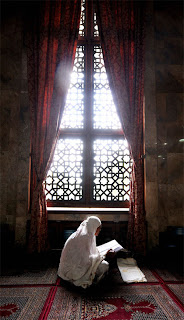 Egypt's women have already made inroads into several one-time domains of men. But a suggestion to allow women to recite Islam's holy book the Quran in public has triggered sharp differences among Muslim clerics in this country recently swept by a wave of Islamism.

"Such calls echo a Western agenda," said Mohammad Al Barri, a cleric at Al Azhar, Sunni Islam's influential seat of learning. "There is no clear text in the Quran or the Prophet Mohammad's [PBUH] sunna [traditions and sayings] that women recited the Holy Quran in front of men. Should this happen, there would be a big sedition, which we should avoid by all means," Al Barri told a seminar at the Egyptian Press Syndicate this week.

"The only place where women can read the Holy Quran is in the presence of other women," Al Barri, the Al Azhar scholar, said. "Letting a woman read in front of men would tempt them, thereby earning her and them God's wrath instead of His contentment."

Official ceremonies are usually opened with verses from the Quran, which are always recited by male shaikhs.

Likewise, Egypt's Muslims usually hire male reciters to read from the Holy Quran in the presence of male mourners in memory of their departed relatives. Never have women reciters been seen doing this.

"Women should have the right to recite the Holy Quran in public," said Souad Saleh, a well-known woman Muslim preacher. She told the same seminar that women's voices are not enticing and as such should not be suppressed.
source
Posted by Zafar Khan at 10:45