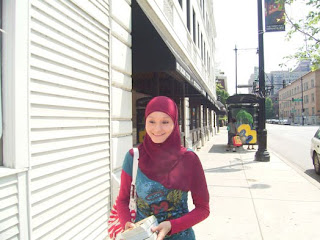 Every Sunday morning, a group of women meets at the Mosque Foundation in Bridgeview to study the Quran. They are Muslim, of course, but also Latinas.

Most of them converted to Islam after growing unhappy with aspects of Catholicism and they found a new identity in being Muslim while also retaining their ethnic traditions.

“I learned to respect myself through Islam,” said Magdalena Hanafi, a native of Mexico who is married to an Egyptian man and converted 15 years ago.

Latino Muslims in Chicago are less visible and organized than in New York or in California, where they have official groups and organizations, but they are nonetheless a community. Its members are mainly women and they usually meet in informal settings, like private houses, or in mosques that give them a space to organize social and religious activities.

According to a Pew Research report, 4 percent of the American Muslim population is of Hispanic origins. There are a total of 1.4 million Muslims 18 years or older living in the United States, according to the report.

James E. Jones, a professor of world religions at Manhattanville College, said there is a rich historical connection between Spanish culture and Islam. “This history resonates for them [Latinos],” he said.

Jones likened the conversion movement to the African American Islamic tradition; in both cultures individuals are seeking an alternative positive identity. In addition to a spiritual attraction, Jones said, some are attracted to “faith that posits the belief in one community.”

Latino converts usually have a Catholic background, from which they have gradually distanced themselves, often out of dissatisfaction over specific religious practices or theological tenets.

Juliane Hammer, a professor of religious studies at George Mason University, said that “something happens to Catholic identity that opens the door to considering other religious identities.”

Hazel Gomez is a community organizer at the Inner City Muslim Action Network, a non-profit social service organization on the South Side She is of Puerto Rican and Mexican origin and she converted to Islam when she was 18, after noticing a striking difference between the intensity of the spiritual experience lived by her Muslim classmates and her own.

“I would see my friends happy that they were fasting,” Gomez said.

Catholicism, she said, didn’t provide her with a simple and structured way of life she was looking for.

“Catholicism wasn’t something I could live every day,” she said, adding that she appreciates the ritual of prayer multiple times a day.

And she said she was dissatisfied with certain principles of Catholicism.

“There were certain things that didn’t sound right to me,” Gomez said.

Confession, she said, was hard to accept. “Telling your sins to another human being made no sense to me,” she said.

The doctrine of the trinity, according to which God is composed of three persons – Father, Son and Holy Spirit – is another part of Catholicism that many converts contest.

Ruth Saleh, a native of Mexico who has been a Muslim for more than 20 years, said that she had long had doubts about this principle even before converting.

“That was something in the back of my mind when I was Catholic,” she said. “To believe that there is only one God was the most reasonable explanation for me.”

The Muslim Latino community in Chicago

Although there isn’t any official data or studies on Latino Muslims in Chicago, members of the community agree that they are mostly women and that they rely mainly on informal social networks, since they lack a specific Latino worship place.

“Women are more active in the community,” said Rebecca Abuqaoud, a native of Mexico who came to the United States when she was 21 and converted to Islam 12 years ago.

Men, she said, were more involved in the past, while now women are the ones who usually organize social activities. Abuqaoud said that they have organized women-only events for 10 years. The last one was held a couple of weeks ago and drew about 100 participants.

“I don’t know where the Latino men go,” Gomez said.

For her, women are more active because they need more support. “It’s so empowering to see so many women,” she said.

Gomez, who is starting a Latino Muslim organization in Chicago with a couple of other women, said that social events are key to bringing families together. At these events, she said, non-Muslim family members realize: “’Hey, my daughter is not the only Latina Muslim there.”

Being Latino and a Muslim

Surprise and puzzlement are the most common reactions that Latino Muslims usually face when they first convert to Islam.

“My family thought this religion was only for Arabs and not for Mexicans,” Hanafi said.

With time, however, many Latina Muslims said their families have come to terms with their decision and understand that their being Muslim can coexist with their Latino roots.

“My family didn’t like it in the beginning,” Saleh said. “Now they accept it.”

Gomez said that there is no contradiction in being a Latina and a Muslim; rather there is enrichment.

“As a Latina Muslim I’ve grown more not only as a Muslim but as Latina and as someone who is trying to contribute to society,” she said.

For Jennifer Maytorena Taylor, who directed “New Muslim Cool,” a documentary on Puerto Rican American convert and rapper Hamza Pérez, Latinos who convert to Islam can be considered part of a larger American cultural picture.

“Americans reinvent themselves quite a bit,” she said “It’s the basic idea of our national identity.”