Turkey and the Neocons 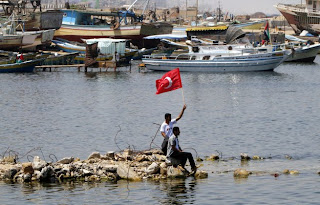 It couldn't be more predictable. Back when Israel and Turkey were strategic allies with extensive military-to-military ties, prominent neoconservatives were vocal defenders of the Turkish government and groups like the Anti-Defamation League (ADL) and AIPAC encouraged Congress not to pass resolutions that would have labeled what happened to the Armenians at the hands of the Turks during World War I a "genocide." (The "Armenian lobby" is no slouch, but it's no match for AIPAC and its allies in the Israel lobby). The fact that the ADL was in effect protecting another country against the charge of genocide is more than a little ironic, but who ever said that political organizations had to be ethically consistent? Once relations between Israel and Turkey began to fray, however -- fueled primarily by Turkish anger over Israel's treatment of the Palestinians -- the ADL and AIPAC withdrew their protection and Congressional defenders of Israel began switching sides, too.

Last week Jim Lobe published a terrific piece at InterPress Service, detailing how prominent neoconservatives have switched from being strong supporters (and in some cases well-paid consultants) of the Turkish government to being vehement critics. He lays out the story better than I could, but I have a few comments to add.

First, if this doesn't convince you that virtually all neoconservatives are deeply Israeli-centric, then nothing will. This affinity is hardly a secret; indeed, neocon pundit Max Boot once declared that support for Israel was a "key tenet" of neoconservatism. But the extent of their attachment to Israel is sometimes disguised by the claim that what they really care about is freedom and democracy, and therefore they support Israel simply because it is "the only democracy in the Middle East."

But now we see the neoconservatives turning on Turkey, even though it is a well-functioning democracy, a member of NATO, and a strong ally of the United States. Of course,Turkey's democracy isn't perfect, but show me one that is. The neocons have turned from friends of Turkey to foes for one simple reason: Israel. Specifically, the Turkish government has been openly critical of Israel's conduct toward the Palestinians, beginning with the blockade of Gaza, ramping up after the brutal bombardment of Gaza in 2008-2009, and culminating in the lethal IDF attack on the Gaza Freedom Flotilla. As Lobe shows, a flock of prominent neoconservatives are now busily demonizing Turkey, and in some cases calling for its expulsion from NATO.

Thus, whether a state is democratic or not matters little for the neocons; what matters for them is whether a state backs Israel or not. So if you're still wondering why so many neoconservatives worked overtime to get the U.S. to invade Iraq -- even though Osama bin Laden was in Afghanistan or Pakistan -- and why they are now pushing for war with Iran, well, there's your answer.

As I've said repeatedly, there's nothing wrong with any American feeling a deep attachment to a foreign country and expressing it in politics, provided that they are open and honest about it and provided that other people can raise the issue without being accused of some sort of bigotry. The neocons' recent volte-face over Turkey is important because it reveals their policy priorities with particular clarity, and Lobe deserves full points for documenting it for us.

One last comment. Neoconservatives usually portray American and Israeli interests as essentially identical: In their eyes, what is good for Israel is good for the United States and vice versa. This claim makes unconditional U.S. support seem like a good idea, and it also insulates them from the charge that they are promoting Israel's interests over America's. After all, if the interests of the two states are really one and the same, then by definition there can be no conflict of interest, which means that the "dual loyalty" issue (a term I still don't like) doesn't arise.

I hold the opposite view. I believe that the "special relationship" has become harmful to both countries, and that a more normal relationship would be better for both. Right now, the special relationship hurts the United States by fueling anti-Americanism throughout the region and making us look deeply hypocritical in the eyes of billions -- yes, billions -- of people. It also distorts our policy on a host of issues, such as non-proliferation, and makes it extremely difficult to use our influence to advance the cause of Middle East peace. President Obama's failures on this front -- despite his repeated pledges to do better--make this all-too-obvious. At the same time, this unusual relationship harms Israel by underwriting policies that have increased its isolation and that threaten its long-term future. It also makes it nearly impossible for U.S. leaders to voice even the mildest of criticisms when Israel acts foolishly, because to do so casts doubts about the merits of the special relationship and risks incurring the wrath of the various groups that exist to defend it.

Although the United States and Israel do share certain common interests, it is becoming increasingly clear that their interests are not identical. This situation puts die-hard neoconservatives in a tough spot, as it could force them to choose between promoting what is good for America or defending what they think (usually wrongly) will be good for Israel. And insofar as prominent neocons continue to beat the drums for war, it behooves us to remember both their abysmal track record and their underlying motivations.