Abandoned in Pakistan by her British husband 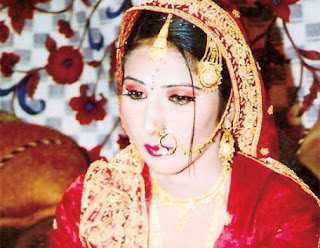 The picture shows Aqila, aged 18, celebrating her marriage in front of relatives and friends. At the time she dreamt of coming to England for a happy, long life with her new husband and his family.

Two years later, the young bride is stranded in her village in Pakistan after, a court has heard, being drugged and forcibly taken back by her husband and father-in-law without her newborn baby. Aqila, 20, was dumped outside her parents' house in March without her passport and British visa, leaving her stranded with little hope of return, the High Court was told last week.

Her case highlights the plight of what is feared to be a growing number of women who come to Britain after marrying a British husband and are then abandoned back home without their children or immigration documents.

Lawyers hope that a ruling this week will expose the full extent of cases similar to Aqila's and force the authorities to recognise the need for action to prevent mothers from being separated from their children. Her solicitor has dealt with at least 50 cases and says this is a hidden abuse of women from overseas who marry British men.

Aqila, who speaks no English, was forced to plead with the judge to reunite her with her tiny son via video link last Wednesday after the Home Office refused to allow her into the country even to attend the hearing.

The court's Family Division must decide if Aqila was forcibly marooned in Pakistan in order to take her child or whether she willingly left him behind, stranded there because of an unfortunate set of unplanned events.

Justice Mary Hogg is expected to make a landmark ruling after Aqila's legal team presented her with six other cases that illustrate the plight of scores of women brought to the UK after arranged marriages and dumped back overseas when they have given birth or their husbands have tired of them.

If Mrs Justice Hogg identifies "abandoned spouses" as a phenomenon, it could help British courts to reunite scores of children with their mothers forced to fight lengthy legal battles.

Last Friday Mrs Justice Hogg took the unusual step of allowing partial identification of Aqila because of the "public interest" in shining a light on this hidden issue. Aqila's solicitor, Anne-Marie Hutchinson from Dawson Cornwell, has nine other "abandoned spouse" cases but has dealt with dozens more over the past five years.

Her barrister, Teertha Gupta, said: "We are asking the court to take judicial notice of these other cases and say something which will help young girls who find themselves in this situation. We hope also this will have a deterrent effect to stop families doing something without thinking it through."

Born in 1989 in a village in the Azad Jammu and Kashmir region of Pakistan, just yards away from her husband's ancestral home, Aqila was a bright woman who finished high school. As was her family tradition, her marriage was arranged between her own and her husband's extended families. She married her husband in March 2008 when she was 18.

Aqila came to live in the north of England in October 2008 on a spousal visa, valid until December 2010. She and her husband, who was her legal sponsor, needed to fulfil certain immigration procedures for her to stay here indefinitely. It never got that far.

Aqila alleges that her husband, mother-in-law and three sisters-in-law started to mistreat her within days of her arrival; they also took her passport. Her husband would become enraged when she challenged him when he stayed out until the small hours. She claims he would on occasion during arguments "pull her hair" and "beat her". The court also heard that she was treated like an "unpaid servant" by the four women in the house who also sometimes "bullied" and "beat" her. She was never allowed out unaccompanied and her phone calls were always monitored, all of which her husband and in-laws denied.

Her father-in-law told the court that although he spent very little time in the house Aqila was very happy. During cross-examination, Aqila's husband admitted that the marriage was "rocky" and that he found his wife "very demanding" and "unreasonable".

Within seven months of her arrival, Aqila was pregnant, and their son was born two months prematurely in January this year. The court heard that there was concern from doctors that Aqila may be unable to have more children. The family rejected suggestions by Aqila's barrister that this was the final trigger which led them to dumping her in Pakistan and keeping the baby. They also denied threatening to kill Aqila while she was pregnant.

Within weeks of the birth, three plane tickets had been bought for Pakistan: two return flights for husband and father-in-law, and a one-way ticket for the new mother. The family repeatedly told the court that Aqila had willingly left her two-month-old son in order to visit her own family for an indefinite period of time. Aqila insisted to the court that she had not wanted to go, especially without her baby, but was "given something" to drug her before the journey and then dumped outside her family home. Her husband and father-in-law left the country less than 48 hours after arriving. She has never seen or spoken to them again.

The husband's barrister, Nasra Butt, told the court that her client left Pakistan after making a snap decision that the marriage was over following a row with his wife's family, and that he never intended to leave her stranded without her documents. He claims to have posted his wife's passport, which included her visa, her ID card and the divorce papers he had obtained from a priest within hours of the row, to the British High Commission. The documents have not been seen since.

Aqila has a new Pakistani passport but the British High Commission has refused to supply her with a duplicate spousal visa which would allow her to fight this case in person. Mrs Justice Hogg drew attention to the difficulties involved in conducting the trial using video and telephone links. The UK Borders Agency insisted yesterday that all visa application involving child custody cases were "carefully reviewed".

In summing up Mr Gupta said: "Aqila was dependent on her husband's family for everything. The powerbase was with the family and open to abuse... This marriage was not working so this unsophisticated family decided to return her back to where they had found her because she had performed her role; she had produced a child, and so could now be disregarded."

Outside court Ms Hutchinson said: "We want guidance from High Court so that these cases are fast-tracked to determine as quickly as possible how mum ended up out of country, whether by choice or was she pushed or duped."

Speaking through a translator Aqila told The Independent on Sunday: "I spend my days praying and crying to God to let be with my son. That's all I want. I don't want to bring ill to my in-laws. I just want to be with my child. Without him I have nothing." The judge's ruling is expected this week.

The Timeline: Aqila's story: married, beaten, drugged, abandoned and separated from her child

July 1989 Born in Azad Jammu and Kashmir region of Pakistan.

October 2008 Arrives in England on a spousal visa to live with husband and his family.

February 2010 Three flights bought to Pakistan, Aqila's is the only one-way ticket.

March 2010 Travels to Pakistan with husband and father-in-law. Both return in 48 hours, leaving her without a passport.

June 2010 Gets new Pakistani passport but is refused a duplicate visa. Participates in a week-long hearing. Husband's family agree to send her a photo of her son.