The Trouble with Dr. Zakir Naik 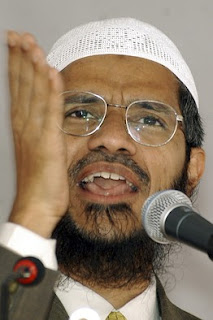 If you're looking for a snapshot of India's hapless response to radical Islam, then look no further than Bombay-based cleric Dr. Zakir Naik. In India, the 44-year-old Dr. Naik—a medical doctor by training and a televangelist by vocation—is a widely respected figure, feted by newspapers and gushed over by television anchors. The British, however, want no part of him. On Friday, the newly elected Conservative-led government announced that it would not allow Dr. Naik to enter Britain to deliver a series of lectures. According to Home Secretary Theresa May, the televangelist has made "numerous comments" that are evidence of his "unacceptable behavior."

The good doctor's views run the gamut from nutty to vile, so it's hard to pinpoint which of them has landed him in trouble. For instance, though Dr. Naik has condemned terrorism, at times he also appears to condone it. "If he [Osama bin Laden] is fighting the enemies of Islam, I am for him," he said in a widely watched 2007 YouTube diatribe. "If he is terrorizing the terrorists, if he is terrorizing America the terrorist, the biggest terrorist, I am with him. Every Muslim should be a terrorist."

Dr. Naik recommends the death penalty for homosexuals and for apostasy from the faith, which he likens to wartime treason. He calls for India to be ruled by the medieval tenets of Shariah law. He supports a ban on the construction of non-Muslim places of worship in Muslim lands and the Taliban's bombing of the Bamiyan Buddhas. He says revealing clothes make Western women "more susceptible to rape." Not surprisingly, Dr. Naik believes that Jews "control America" and are the "strongest in enmity to Muslims."


Of course, every faith has its share of cranks; and, arguably, India has more than its share. But it's impossible to relegate Dr. Naik to Indian Islam's fringe. Earlier this year, the Indian Express listed him as the country's 89th most powerful person, ahead of Nobel Laureate economist Amartya Sen, eminent lawyer and former attorney general Soli Sorabjee, and former Indian Premier League cricket commissioner Lalit Modi. Dr. Naik's satellite TV channel, Peace TV, claims a global viewership of up to 50 million people in 125 countries. On YouTube, a search for Dr. Naik turns up more than 36,000 hits.

Nobody accuses Dr. Naik of direct involvement in terrorism, but those reportedly drawn to his message include Najibullah Zazi, the Afghan-American arrested last year for planning suicide attacks on the New York subway; Rahil Sheikh, accused of involvement in a series of train bombings in Bombay in 2006; and Kafeel Ahmed, the Bangalore man fatally injured in a failed suicide attack on Glasgow airport in 2007.

Nonetheless, when the doctor appears on a mainstream Indian news channel, his interviewers tend to be deferential. Senior journalist and presenter Shekhar Gupta breathlessly introduced his guest last year as a "rock star of televangelism" who teaches "modern Islam" and "his own interpretation of all the faiths around the world." A handful of journalists—among them Praveen Swami of the Hindu, and the grand old man of Indian letters, Khushwant Singh—have questioned Dr. Naik's views, but most take his carefully crafted image of moderation at face value.

At first glance, it's easy to understand why. Unlike the foaming mullah of caricature, Dr. Naik eschews traditional clothing for a suit and tie. His background as a doctor and his often gentle demeanor set him apart, as does his preaching in English. Unlike traditional clerics, Dr. Naik quotes freely from non-Muslim scripture, including the Bible and the Vedas. (You have to pay attention to realize that invariably this is either to disparage other faiths, or to interpret them in line with his version of Islam.) The depth of Dr. Naik's learning is easily apparent.

But this doesn't fully explain Dr. Naik's escape from criticism. It helps that Indians appear to have trouble distinguishing between free speech and hate speech. In a Western democracy, demanding the murder of homosexuals and the second-class treatment of non-Muslims would likely attract public censure or a law suit. In India, it goes unchallenged as long as it has a religious imprimatur. However, create a book or a painting that ruffles religious sentiment, as the writer Taslima Nasreen and the painter M. F. Husain both discovered, and either the government or a mob of pious vigilantes will strive to muzzle you.

In general, India accords extra deference to allegedly holy men of all stripes unlike, say, France, which strives to keep religion out of the public square. Taxpayers subsidize the Haj pilgrimage for pious Muslims and a similar, albeit much less expensive, journey for Hindus to a sacred lake in Tibet. This reflexive deference effectively grants the likes of Dr. Naik—along with all manner of Hindu and Christian charlatans—protection against the kind of robust scrutiny he would face in most other democracies.

Finally, unlike Hindu bigots, such as the World Hindu Council's Praveen Togadia, whose fiercest critics tend to be fellow Hindus, radical Muslims go largely unchallenged. The vast majority of Indian Muslims remain moderate, but their leaders are often fundamentalists and the community has done a poor job of policing its own ranks. Moreover, most of India's purportedly secular intelligentsia remains loath to criticize Islam, even in its most radical form, lest this be interpreted as sympathy for Hindu nationalism.

Unless this changes, unless Indians find the ability to criticize a radical Islamic preacher such as Dr. Naik as robustly as they would his Hindu equivalent, the idea of Indian secularism will remain deeply flawed.