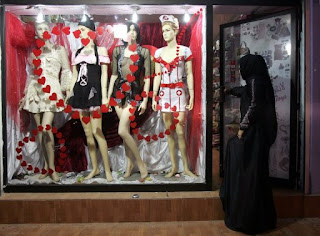 MANAMA — Usually veiled and wearing a modest, flowing abaya, Khadija Ahmed looks an unlikely owner of the conservative Gulf's first sex shop.
She sees nothing wrong, however, with selling "joy jelly," edible undies or the vibrating accoutrements offered by such niche boutiques around the world, insisting that nothing in Islam forbids the pleasures of the bedroom.

"It's not a sex shop in the Western sense," she explained, "but a place to help married couples, and only married couples, enjoy sex to the full."
Ahmed, who admits that she cannot, of course, check identity cards to see whether clients are married or not, got the idea for the business as she came to realise how many men and women were having extra-marital affairs.

Her shop, named Dar Khadija, aims "to provide a service to married couples by making their sex lives more exciting than the lure of an affair.
"Why do married men and women go looking for love elsewhere? Because of the routine that couples fall into."

If whips and leather bondage suits are what you're seeking to pep up your sex life then you won't find them in Dar Khadija.
Nevertheless, it does offer risque bedroom accessories and kinky lingerie, plus a selection of ladies' clothing which range from jeans and tops to fancy evening dresses and embroidered abayas.
And edible underwear.

"The feedback from the clientele has been good. One of my customers told me that I saved his marriage, just as he was about to get divorced," she said.
"That makes me happy as I told myself I might have helped a couple to stay together and a family has not broken up."

Ahmed, 32, launched Dar Khadija online in 2007 and goods were available by mail order only. However, as business prospered she secured permission for a shop, the only one of its kind in the Gulf.
In neighbouring Saudi Arabia, with its notoriously strict brand of Sunni Islam, such an outlet would be unthinkable.

But Bahrain's relatively liberal environment has made the Gulf archipelago an attraction for visitors from more conservative Muslim states in the region, especially Saudis, many of whom travel every weekend across the 30-kilometre (19-mile) causeway that links the two countries.

Of course, there has been criticism and unwanted attention.
Appearing on a television show, aired from Lebanon, some callers told her that her business was shameful and that she shouldn't be wearing the Islamic headcover.
The incomprehension of customs officials or the conservatism of its retail supervisors have sometimes led to her orders -- she imports most of her stock from the American market -- being rejected or severely delayed.

Ahmed is defiant about the moral legitimacy of her business, which won the approval of authorities and has no shortage of clients, mainly thanks to its website.
"Nothing in Islam forbids sexual pleasure. Ask that question to any devout Muslim and he will not tell you otherwise," she insisted.
As she spoke, a man in his 50s enters the shop and asked for massage cream to help "improve his performance."

He said he heard about the shop when he saw Ahmed appear on television, and talked to her at length about brands and prices.
Curious onlookers and teenagers are discouraged
"I only deal with responsible adults, and I have male and female customers, with a slightly larger proportion of women," she said.
"A stable family is our desire for everyone... and I have the feeling I am helping in my way," she added.
"As for perversions, that's not my business."