Israel forced to apologise for YouTube spoof of Gaza flotilla 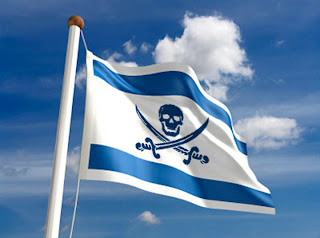 The Israeli government has been forced to apologise for circulating a spoof video mocking activists aboard the Gaza flotilla, nine of who were shot dead by Israeli forces last week.

The YouTube clip, set to the tune of the 1985 charity single We Are the World, features Israelis dressed as Arabs and activists, waving weapons while singing: "We con the world, we con the people. We'll make them all believe the IDF (Israel Defence Force) is Jack the Ripper."

It continues: "There's no people dying, so the best that we can do is create the biggest bluff of all."

The Israeli government press office distributed the video link to foreign journalists at the weekend, but within hours emailed them an apology, saying it had been an error. Press office director Danny Seaman said the video did not reflect official state opinion, but in his personal capacity he thought it was "fantastic".

Government spokesman Mark Regev said the video reflected how Israelis felt about the incident. "I called my kids in to watch it because I thought it was funny," he said. "It is what Israelis feel. But the government has nothing to do with it."

The clip features a group led by the Jerusalem Post's deputy managing editor Caroline Glick, wearing keffiyehs and calling themselves the Flotilla Choir. The footage is interspersed with clips from the recent Israeli raid on the Gaza-bound aid ship, the Mavi Marmara.

The clip has been praised in Israel, where the mass-circulation daily Yediot Aharonot said the singers "defended Israel better than any of the experts".

But Didi Remez, an Israeli who runs the liberal-left news analysis blog Coteret, said the clip was "repulsive" and reflected how out of touch Israeli opinion was with the rest of the world. "It shows a complete lack of understanding of how the incident is being perceived abroad," he said. Award-winning Israeli journalist Meron Rapoport said the clip demonstrated prejudice against Muslims. "It's roughly done, not very sophisticated, anti-Muslim – and childish for the government to be behind such a clip," he said.

A similar press office email was sent to foreign journalists two weeks ago, recommending a gourmet restaurant and Olympic-sized swimming pool in Gaza to highlight Israel's claim there is no humanitarian crisis there. Journalists who complained the email was in poor taste were told they had "no sense of humour".

Last week, the Israel Defence Force had to issue a retraction over an audio clip it had claimed was a conversation between Israeli naval officials and people on the Mavi Marmara, in which an activist told soldiers to "go back to Auschwitz". The clip was carried by Israeli and international press, but today the army released a "clarification/correction", explaining that it had edited the footage and that it was not clear who had made the comment.

The Israeli army also backed down last week from an earlier claim that soldiers were attacked by al-Qaida "mercenaries" aboard the Gaza flotilla. An article appearing on the IDF spokesperson's website with the headline: "Attackers of the IDF soldiers found to be al-Qaida mercenaries", was later changed to "Attackers of the IDF Soldiers found without identification papers," with the information about al-Qaida removed from the main article. An army spokesperson told the Guardian there was no evidence proving such a link to the terror organisation.

While the debate over accounts of the flotilla raid continues, Israel is facing more boycotting. In the past week, three international acts, including the US rock band the Pixies, have cancelled concerts in Tel Aviv.

Best-settling authors Alice Walker and Iain Banks have backed the boycott campaign, with Banks announcing his books won't be translated into Hebrew. Dockworker unions in Sweden and South Africa have refused to handle Israeli ships, while the UK's Unite union just passed a motion to boycott Israeli companies.
source
Posted by Zafar Khan at 10:40