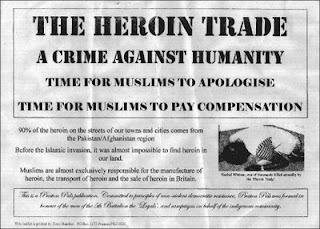 Anthony Bamber, 54, printed and then distributed documents entitled The Heroin Trade which allegedly claimed followers of Islam were responsible for the sale of the drug on Britain's streets.

It said the trade was a "crime against humanity" and demanded that Muslims "apologise and pay compensation" for the flow of heroin from Pakistan and Afghanistan.

Preston Crown Court was told Bamber, of Preston, Lancashire, targeted various people across the North West in his leaflet drops between March and November 2008, including a school in Sedbergh, Cumbria, two barristers in Manchester, and addresses in Harrogate.

David Perry QC, prosecuting, said: "The defendant distributed leaflets and letters by hand or by post which were threatening and he did so with the intention of creating or stirring up religious hatred, and the religion he directed the hatred towards was Islam.

"This case is about hate speech. That is speech designed to arouse hatred against members of a social group identified by a particular characteristic.

"In this case the social group is Muslims and the characteristic they share is religion, namely Islam.

"The objective of the letters and leaflets, the prosecution say, was to provoke hatred of Islam. The hatred was not directed just at the concept but at the followers of Islam - Muslims."

In March 2008, Bamber and another man visited Barnoldswick, Lancashire, where they delivered the leaflets by hand, the court heard.

A householder in the area contacted the police, who arrived and spoke to the defendant, Mr Perry said.

"The defendant admitted he had been distributing the leaflets and he said his purpose was to promote an organisation known as the Preston Pals," the prosecutor said.

The Preston Pals was a battalion which fought in the First World War which recruited its members from the city.

"The defendant also said that the leaflet was inspected by a lawyer who informed him that the material could not be interpreted as provoking religious or religious hatred."

The jury was told the leaflet said 95% of heroin traded in the UK came from the Pakistan and Afghanistan region and was a "crime against humanity".

It continued: "Before the Islamic invasion it was impossible to find heroin in our land. Muslims are almost exclusively responsible for its production, transportation and sale.

"It is a crime against humanity because it has caused far more suffering than slavery ever did. It has led to millions of premature deaths."

Taxpayers were also victims due to the cost of policing and rehabilitation for which Muslims must compensate, the leaflet added.

Muslims should be held to account with condemnation heaped upon them so that it would lead to the abolition of the trade, it concluded.

The leaflet was labelled a Preston Pals publication which was "committed to non-violent democratic resistance" and was set up in honour of the soldiers in a "campaign on behalf of indigenous communities".

Mr Perry said the real intention of the leaflet was "obvious".

The crime of drug trafficking was the collective responsibility of all Muslims - according to the leaflet - and they were all being "tarred with the same brush".

He told the jury the tone of the leaflet could be seen as "militaristic and menacing" rather than promoting a non-violent and democratic cause.

"You may think it is intolerant, bigoted and intended to be divisive. It is blaming Islam with contestable and questionable assertions of facts and stoking resentment.

"The prosecution say that the overall message is that Muslims are killing British youths and they must themselves be made to pay and it is your duty to make them pay. They are 'the invader'."

In June 2008 the headteacher of Sedbergh School received a large brown envelope which contained a number of letters addressed to individual teachers.

The letters were along similar lines to the leaflet and called for Muslims to be held to account for the heroin trade.

"We know we are asking a lot," it said. "There are many dangers with confronting the Muslim invader."

Similar material was also sent to two barristers in Manchester and addresses in Lytham and Eccleston, Lancashire, and Harrogate, North Yorkshire, the court was told.

Bamber, of Greenbank Street, who is representing himself, denies seven counts of distributing threatening written material intended to stir up religious hatred.

The trial is expected to last up to two weeks.