An Apology to the Non-Hijabi 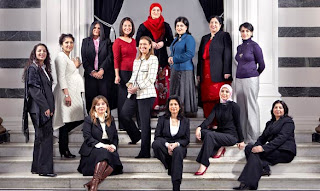 At a recent Egyptian dinner in honor of a visitor to our town, I encountered a situation that opened by eyes to an important issue that is rarely addressed.

I approached the honored guest to offer my obligatory salaams. She seemed nice, more quiet than others and the wrinkles on her face indicated that she must be a grandma. She asked me hesitantly which one of the women behind me was my mom so she can extend her good wishes to our family. I pointed in the direction of where my mother was assisting the ladies set the table for dinner, The old lady gasped for air and looked puzzled and said with disgust FOR EVERYONE TO HEAR:

"Why doesn't your mom wear hijab? And how come you wear hijab and your mother doesn't?"

My initial reaction was to tell the woman off. But given the setting, the people she was related to I cared about and my good upbringing, I defied my instincts and calmly responded: "Why don't you ask her yourself?"

**
I realize now, years into my understanding of my own identity of a Muslim American woman, that most frequently women who don't wear hijab tend to be harassed, marginalized, patronized, lectured, judged, attacked, and insulted--get this--BY THEIR OWN COMMUNITIES, the Muslim community specifically.

I've read countless articles, blogs, books, etc where Muslim women whine about their rights to cover, to not be judged for their choices, etc. But the opposite isn't always true. If a woman by choice doesn't wear the hijab, she is mistreated or pressured by the community to become a hijabi. I find it interesting that Muslims tend to preach and demand rights from others, yet they fail to fulfill them themselves. Where is the respect, freedom of choice and tolerant attitudes when it comes to Muslim women who don't wear hijab?

I would like to say it loud and clear for everyone to hear: Muslim women who DON'T wear hijab are Muslim; they can be practicing; they can be God-fearing; they can love God more than a hijabi ever will; they can provide for the community. A piece of cloth doesn't determine who you are with relation to God.

Hijab doesn't mean piety. I've met the most despicable people who wear hijab, niqab, abaya, or whatever. And I've also met the nicest, most practicing, most inspiring women who don't wear hijab, but are modest in their heart, body and soul.

A recent Twitter buddy was upset when she took a short cab ride to her job in Cairo City, Egypt. The driver guilt her about her exposed hair. He told her she must cover because it's the duty of Muslim women to cover. She embarrassingly admitted that she wasn't Muslim and his lecture didn't apply to her. He then continued with his abuse and told her she was going to hell either way then!

**
I think the 'holier-than-thou' attitudes in the Muslim community have no place in Islam. Prophet Muhammad didn't teach hate, but love. He taught us to be kind, to react calmly and to be gentle. I say we leave judging for God and embrace one another so we can fulfill the Godly command in the Quran to stand united by one another to battle evil and do good.

On behalf of the abusive men and women who have made you feel 'less' of a Muslim or who have lectured you endlessly on the lack of your faith, I would like to apologize to you, the Muslim Non-Hijabi, for all the pain and disrespect we've intentionally and unintentionally caused in the name of God.