Why is Amir Khan not a superstar? 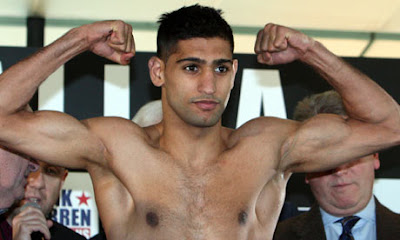 The British boxer Amir Khan believes he is not fully accepted in this country because of his Asian Muslim background and insists he would be regarded as a "superstar" if he were white.

Speaking before the defence of his WBA light-welterweight title against Dmitriy Salita in Newcastletomorrow night, Khan spoke of his frustration at how his attempts to break down racial barriers had been stymied by bigotry, whereas he had been treated "like God" since moving to the United States.

"I can only say that sometimes ,skin colour does make a difference," Khan said. "I know for a fact if I were a white English fighter maybe I would have been a superstar in Britain, and the world."

Khan, who won a silver medal at the Athens Olympics in 2004, has been booed in each of his three fights since being knocked out by the Colombian Breidis Prescott last year. He admitted that the racist abuse he has received on internet forums hurt, but said it made him more determined as a boxer. "It made me come back even stronger," he said. "It made me a better fighter. I'm proud to be British."

Khan added: "I try to fix things between the Asian community and the English community. There are always going to be racial things there, not getting on with each other and stuff. I have tried to break that barrier. I'm British, I went to the Olympic Games for Britain. I could have chosen to go for Pakistan if I was like that, if we were all like that – and also, me being Muslim as well. I respect other religions and other cultures."

Figures also show that ethnic minorities have the worst unemployment and housing crises in the country.

Some 70 percent of all ethnic minorities live in the 88 most deprived areas, compared to 40 percent of the general population.