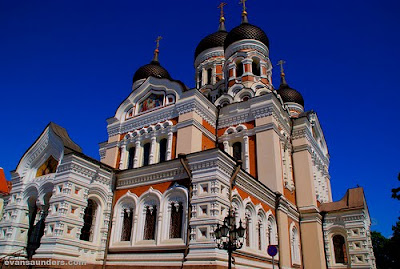 After decades of oppression under the Communist rule, Muslims in the northern European republic of Estonia are happily enjoying their religious festivals with congregational prayers and outdoor festivities.

"There are no restrictions on Muslims celebrating `Eid or performing their religious rituals," Liya Iman Makhmutova, director of the Islamic Society of Estonia’s women section, told IslamOnline.net.

In the early morning of Friday, November 27, Muslims in the capital Tallinn will flock to the Islamic Center for a special prayer marking `Eid el-Adha.

"After prayers, people stay in the mosques until the preacher finishes his sermon," she said.

The `Eid sermon is delivered in four languages; Russian, Estonian, Arabic and Tatari.

"It feels great when you see each worshipper enjoying the sermon delivered in his own language," explains Mufti Ildar Muhhamedsin.

The details of the `Eid might sound very common and basic for many Muslims around the world.

But for people who suffered for decades under the yoke of the Communist rule, they are not.

"Under the Communist rule people would gather in `Eid inside the house of one Muslim or maybe in the cemetery to pray and celebrate in secret," Makhmutova recalled.

"Now the situation has totally changed."
There are nearly 8,000 Muslims in Estonia, making up one percent of the country’s 1.2 million people.

Muslims are mainly Sunni Tatars and Shiite Azeri whose ancestors immigrated to Estonia after the passing of Livonia and Estonia into the Russian Empire in 1721.
The northern European country gained independence from the Soviet Union in 1991 and joined the European Union in 2004.

Following the `Eid prayers, the Islamic Center in Tallinn organizes a small tea and cake part for the worshippers.

"This get-together is very important for Muslims," said Makhmutova.

"Many of those who attend the prayers are new reverts, who don’t have relatives to celebrate `Eid with," she explained.

"Therefore we meet after the prayers to celebrate `Eid together."

Muslims then go to make their sacrifice.

A financially-able Muslim sacrifices a single sheep or goat or shares six others in sacrificing a camel or cow as an act of worship during the four-day `Eid Al-Adha.

The ritual commemorates Prophet Ibrahim's willingness to sacrifice his son Ismail to Allah as an act of obedience and submission.

The Udhiyah meat should be divided in three equal parts, one each for one's own family, friends and the poor.

The festivities begin on the second day of `Eid el-Adha.

"Many families prefer to celebrate `Eid in the open air," said Makhmutova.

"We rent a guesthouse in a forest where contests are organized and barbecues are served."

"It is an opportunity to meet people we have not seen for long.

"It also allows youth and children to know each others and strengthen their relations."