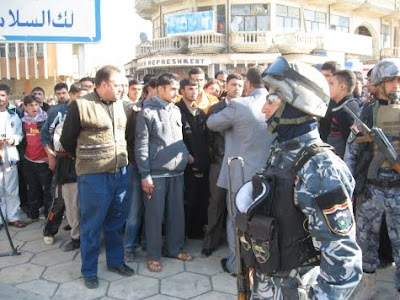 The last time I visited Mosul was in April … it is still a dangerous city but I felt the tension has subsided.

While we were driving through the city… it was something a security adviser of the Mosul governor's office told me that made me realise how serious and dangerous the consequences of the political impasse over the election law could be.

"You see all this destruction … It was all destroyed in 2005, 2006 and 2007. What you are seeing would be nothing compared to what may happen if we don’t take part in the election. I am not just talking about myself but all the people in Mosul," Zuhair Younes said.

Resentment, anger … that was the feeling I got after speaking to many people of this northern Iraqi province.

This is a Sunni heartland. And the provincial authorities, tribal elders and many of its people are threatening to boycott national elections if parliament approves a law that reduces the number of seats allocated to their province.

"This is a conspiracy to get rid of nationalists. Hashemi doesn’t represent anyone but himself," Brahim Sabaweh, a resident of Mosul said.

There is no love lost for vice-president Tarek Hashemi – himself a Sunni. He initially vetoed the law because he wanted more representation for Iraqi exiles abroad - many of them Sunnis.

The move led to a Shia-Kurd alliance against the Sunnis in parliament - which led to the reduction of seats for Sunni provinces.

This is a community which still hasn’t come to terms at their loss of political dominance when the US invaded Iraq in 2003.

For Sunnis, it is all about having a voice in the political process. Many of them boycotted the 2005 election – consequently they didn’t have a role in drafting the constitution which mapped the future of Iraq. But in the 2009 provincial poll, they turned out in large numbers.

The result: an Arab nationalist party took over the provincial government.

It was the first time in post-2003 Iraq that the people of Mosul felt represented … And since then the city has become safer.

But there is a real fear that may change if Sunni governorates lose seats in parliament.

So far, the lack of agreement threatens to divide this country even further.