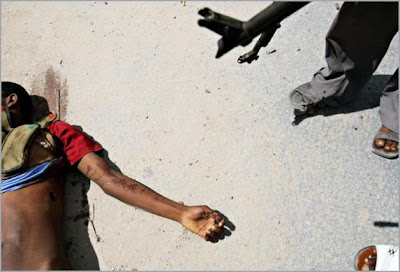 Cooking pots and pans stained with blood were still scattered around the courtyard of the Martini Hospital. A mortar bomb had landed in the garden of this war veterans' retirement home in the Somali capital the day before, killing nine people and injuring 23. In the kitchen, weeping relatives and angry civilians had gathered to mourn the victims. Corpses covered with sheets were being prepared for burial and the air was heavy with incense burned to cover the stench of death. Sunlight filtered in through cracks in the roof, lending the scene a hellish air. "These two were 13 and 14," said a Red Crescent volunteer, pointing to the bodies of two victims. "Nobody knows who did it."

Scenes like this are a daily reality in Mogadishu, a city ravaged by almost 20 years of civil war and abandoned by half its population. Here, civilians bear the brunt of a war that has caused thousands of deaths and displaced 1.5 million people in the past three years alone, according to the United Nations and local human rights groups.

Once full of fine neo-classical Italian architecture dating from its years as the capital of Italian Somaliland, the city centre of Mogadishu is now a mass of rubble and destroyed buildings. Mohammed Farah Siad is a local businessman whose house stands on the front line between the warring factions of the Somali Transitional Federal Government (TFG) and the Islamist rebels of Al-Shabaab. "They're fighting as usual," he says, his voice barely audible above the bursts of machine-gun fire and the roar of rocket-propelled grenades flying back and forth outside his compound. This morning, two militias nominally allied with the TFG are clashing for control of the port, and Mr Siad keeps the gate of his house open to give shelter to civilians caught in the crossfire. "It's the only way to survive here, we have to help each other," he explains. "Always call your friends before venturing out and keep your cell phone with you to receive updates on clashes. It can save your life."

Packed with people in the morning, the streets of Mogadishu suddenly empty in the early afternoon. As darkness falls, clashes increase dramatically. Staying out after 3pm means being at the mercy of the ruthless militiamen who roam the city on "technicals", the machine-gun-equipped pick-ups that have become a grim trademark of the Somali war. The cruelty and greed of the militiamen are notorious, their loyalty always in doubt because of the continuously shifting alliances inside Somali society. Some have mutated into freelance armed groups, kidnapping the few foreigners who dare to venture inside Mogadishu and selling them to the highest bidder. But TFG, cash-strapped and beleaguered, is forced to depend on these unreliable troops to help it fight Al-Shabaab and hang on to the few areas of Mogadishu it still controls.

In this city, which has been labelled the most dangerous on earth, anarchy is the only rule. Carrying a rifle is one of the few ways to earn both a living and the fear of others, if not their respect. "Militiamen break into your house, take all your money and valuables and rape your women. It happens so often. And you can't even complain, because then they will have the pleasure of killing you," laments Abukar Mohallin Mouse, a 60-year-old porter working at Mr Siad's warehouse. "Everything we do, we are scared: you go to the market and get hit by a mortar shell, you speak with foreigners and someone will kill you because he thinks you are a spy. This is not life."

Somalia has not had a functioning government in control of its territory since 1991, and today the divisions run deep. Even if the TFG claims to have the full support of the Somali population, recent events tell a different story. Ideologically linked to al-Qa'ida, Al-Shabaab is growing bolder and stronger by the day, filling its ranks with young men lured by promises of food, money and a holy war to fight for.

"We are receiving more and more reports of foreign fighters coming to Somalia to join Al-Shabaab's ranks," says Sheikh Omar Ali Rooble, a regional leader of the Sufi militia of Ahlu Sunnah wal Jamee'a, a moderate Islamic group allied to the TFG. "They don't speak our language and are not fighting for the sake of this country. They're killing our people and digging our graves, that's why we were forced to take up arms. They claim to defend Islam, but Somalia is 100 per cent Muslim already."

One collateral effect of the prevailing anarchy is lawlessness at sea: with no coastguard or navy to patrol the harbours and monitor comings and goings, Somalia has become the world capital of piracy, a phenomenon which became a headline-grabbing menace in 2009. Today the waters around Mogadishu are patrolled by dozens of warships from many nations, but they have failed to halt the problem, as evidenced by the recent seizure of the Chandlers, a British couple, from their yacht, and this week's hijacking of a huge oil tanker with oil valued at $20m on board.

But Al-Shabaab is the most pressing threat. The hopelessly ineffective rump government is bitter about what it regards as its abandonment by the outside world. Confined to the hills surrounding Villa Somalia, the presidential palace, Deputy Prime Minister Abdulrahman Adan Ibrahim blames his regime's impotence on its abandonment by the outside world.

"If we had received even 30 per cent of the €250m pledged to us by the European Union, Al-Shabaab wouldn't be in Somalia today," he says with a clear hint of bitterness. "We are fighting a group openly linked to al-Qa'ida, which has brought an ideology that has nothing to do with Somali culture."

From outside his office, perched on Mogadishu's highest hills, the view is deceitful: with its whitewashed houses, banana trees and bright blue sea, the city looks like an earthly paradise. But on the road, the scars of this endless civil war are everywhere.

"There was a suicide attack here a few weeks ago," says B, a civilian who didn't wish to be named for his own safety, passing concrete barriers at the entrance to an outdoor market. "More than 10 people died." Crowded areas are becoming the favourite targets of the insurgents, whose Iraqi-style martyrdom tactics were unknown in Somalia until recently.

In September Al-Shabaab staged a suicide attack against the main base of Amisom, the African Union-sponsored peacekeeping mission, in an area that had previously been believed to be beyond the rebels' reach. The attack killed 21 people, including 17 peacekeepers. Originally intended to be 8,000-strong, the mission today has only 5,000 Ugandan and Burundian troops, who are mainly focused on controlling sensitive areas of the city and delivering humanitarian aid. In its hospital, which consists of three military-style tents hidden among the sand dunes of Mogadishu airport, hundreds of patients are treated every day. Under the baking sun, civilians wait patiently for the only doctor available.

"Every night I pray the city remains calm because we are breaking the rules by treating civilians," he says, treating a toddler lying on a stretcher with a gunshot wound in his right leg. "But we can't chase them away, they don't have anywhere else to go." Beds are few and medication is constantly running out as the number of patients multiplies, but the hospital is one of the few facilities functioning in Mogadishu.

And in the view of spokesman Major Barigye Ba-Hoku, it's more than that: it is also a tool to "win the heart and soul of the Somali people". The mission's mandate was recently bolstered to allow it to engage the insurgents, but for him ending this carnage is not about fighting.

"You can send as many reinforcements and weapons as you want, you won't solve the problem," Major Ba-Hoku maintains. "This war has been going on for 18 years: the solution has to come from within. Somali people have to accept peace. Any process driven from outside would be fruitless."

The humanitarian crisis is steadily worsening on a daily basis, and even Somalis are losing faith in their ability to end the conflict. Sitting in the courtyard, Abukar Mohallin Mouse, the porter, stares in despair when asked about the future.

"When there was peace, this city was one of the most beautiful in the world," he recalls. "I really fear I will die before this war is over."

A few yards away, his employer Mr Siad laughs bitterly. "We are destroying our future with our own hands," he says. "Today, a teenager born here has never experienced peace in his whole life. Only a massive foreign intervention can save us. It's sad to say, but we are not able to look after ourselves."

Email ThisBlogThis!Share to TwitterShare to FacebookShare to Pinterest
Labels: Somalia