Blair and Bush planned war 11 months before it took place 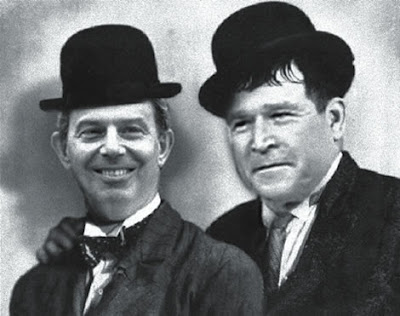 Tony Blair made it clear to George Bush at a meeting in Texas 11 months before the Iraq invasion that he would be prepared to join the US in toppling Saddam Hussein, the inquiry into the war was told today.

The prime minister repeatedly told the US president that British policy was to back United Nations attempts to seek Iraq's disarmament, Sir David Manning, his foreign policy adviser, told the inquiry.

However, Blair was "absolutely prepared to say he was willing to contemplate regime change if [UN-backed measures] did not work", Manning said. If it proved impossible to pursue the UN route, then Blair would be "willing to use force", Manning emphasised.

Manning recalled the meeting between the two leaders at Crawford, Bush's Texas ranch, in April 2002. "I look back at Crawford as the moment that he [Blair] was saying, yes, there is a route through this that is an international, peaceful one and it is through the UN, but if it doesn't work, we will be willing to undertake regime change," Manning said.

The issue is crucial because Blair was warned at the time by Lord Goldsmith, the attorney general, and other legal advisers that going to war with regime change as the objective was unlawful and breached the UN charter.