Robert Fisk on Americans in Afghanistan 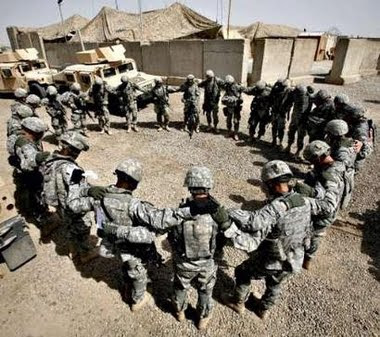 "They shoot Russians," the young paratrooper told me. It was cold. We had come across his unit, the Soviet 105th Airborne Division, near Charikar, north of Kabul, and he was holding out a bandaged hand. Blood seeped through, staining the sleeve of his battledress. He was just a teenager with fair hair and blue eyes. Beside us a Soviet transport lorry, its rear section blown to pieces by a mine – yes, an "improvised explosive device", though we didn't call it that yet – lay upended in a ditch. In pain, the young man raised his hand to the mountain-tops where a Soviet helicopter was circling. Could I ever have imagined that Messers Bush and Blair would have landed us in the same sepulchre of armies almost three decades later? Or that a young black American president would do exactly what the Russians did all those years ago?

Within weeks, we would see the Soviet Army securing Kabul and the largest cities of Afghanistan, abandoning the vast areas of mountain and desert to the "terrorists", insisting that they could support a secular, uncorrupt government in the capital and give security to the people. By the spring of 1980, I was watching the Soviet military stage a "surge". Sound familiar? The Russians announced new training for the Afghan army. Sound familiar? Only 60 per cent of the force was following orders at the time. Yes, it does sound familiar.

Victor Sebestyen, who has researched a book about the fall of the Soviet empire, has written at length of those frozen days after the Russian army stormed into Afghanistan just after Christmas of 1979. He quotes General Sergei Akhromeyev, commander of the Soviet armed forces, addressing the Soviet Politburo in 1986. "There is no piece of land in Afghanistan that has not been occupied by one of our soldiers at some time or another. Nevertheless much of the territory stays in the hands of the terrorists. We control the provincial centres, but we cannot maintain political control over the territory we seize."

As Sebestyen points out, Gen Akhromeyev demanded extra troops – or the war in Afghanistan would continue "for a very, very long time". And how's this for a quotation from, say, a British or US commander in Helmand today? "Our soldiers are not to blame. They've fought incredibly bravely in adverse conditions. But to occupy towns and villages temporarily has little value in such a vast land where the insurgents can just disappear into the hills." Yes, of course, this was Gen Akhromeyev in 1986.

I watched the tragedy play out in those bleak early months of 1980. In Kandahar, the people cried "Allahu Akbar" from the rooftops and on the roads outside the city, I met the insurgents – the Taliban of their time – bombing the Soviet convoys.

North of Jalalabad, they even stopped my bus with red roses in the muzzles of their Kalashnikovs, ordering Communist students from the vehicle. I didn't care to dwell on their fate. No different, I guess, than that of pro-government Afghan students caught by the Taliban today. Outside the city, I was told that the "mujahedin" – President Ronald Reagan's favourite "freedom fighters" – had destroyed a school because it was educating girls. Too true. The headmaster and his wife – after they had been burned – were hanging from a tree.

Afghans approached us with strange stories. Political prisoners were being taken from the country and tortured inside the Soviet Union. Secret rendition. In Kandahar, a shopkeeper, an educated man in his fifties who wore both a European sweater and an Afghan turban, approached me in the street. I still have the notes of my interview.

"Every day the government says that food prices are coming down," he said. "Every day we are told that things are getting better thanks to the cooperation of the Soviet Union. But it is not true. Do you realise that the government cannot even control the roads? Fuck them. They only hold on to the cities." The "mujahedin" infested Helmand province and crossed and recrossed the Pakistani border, just as they do today. A Soviet Mig fighter-bomber even crossed the frontier in early 1980 to attack the guerrillas. The Pakistani government – and the United States, of course – condemned this as a flagrant breach of Pakistan's sovereignty. Well, tell that to the young Americans who control the unmanned Predators so often crossing the border today to attack the guerrillas.

In Moscow almost a quarter of a century later, I went to meet the former Russian occupiers of Afghanistan. Some were now addicted to drugs, others suffered from what we call stress disorder.

And on this historic day – when Barack Obama plunges ever deeper into chaos – let us remember the British retreat from Kabul and its destruction in 1842.