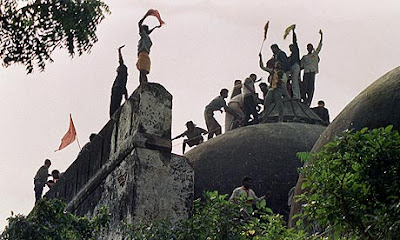 Senior Hindu nationalist politicians in India, including the former prime minister, were implicated today in a long-awaited government report into the demolition of a 16th-century mosque by a mob of Hindus 17 years ago.

A commission headed by the retired judge Manmohan Singh Liberhan produced a 900-page report indicting 68 people for events leading up to the destruction of the Babri mosque, in the northern town of Ayodhya. Among those named were the former prime minister Atal Behari Vajpayee and his deputy prime minister, Lal Krishna Advani.

The events of 1992 were a turning point in India's history, sparking clashes that left more than 1,000 people dead, and marking the political rise of Hindu nationalists. The names included in the report surprised many, especially that of Vajpayee, who had repeatedly said the mosque should not have been destroyed.

According to the judge, both Vajpayee and Advani, as well as other senior rightwing politicians, were "culpable of taking the country to the brink of communal discord". He recommended that using religion to prosecute a political agenda should be outlawed in India.

Ministers said a law designed to prevent a repeat of the mosque demolition was being considered.

The Congress-led government said the commission was a "fact-finding mission" and it was up to law enforcement agencies and prosecutors to pursue those accused. No punitive action would be taken on the basis of the report itself.

Dozens of cases have been lodged in the past 17 years, mired in a welter of claims and counter-claims. Liberhan complained that during questioning witnesses often "protected" senior political figures.

The tearing down of the mosque was the result of a political mobilisation by Advani, the report said. He masterminded the rise to power of the Hindu nationalist Bharatiya Janata party in India by fanning religious zealotry with a pilgrimage in 1992 to the claimed birthplace of the Hindu god Ram, in Ayodhya. On the site was the Babri mosque, which was razed to the ground on 6 December 1992 by Hindu fanatics, setting off clashes between Hindus and Muslims that left more than 1,000 dead.

The violence was among the worst since the partition of British India, and the events have remained a subject of bitter debate. The site remains closed to the public, with tight security surrounding a ramshackle Ram shrine.

The Liberhan commission said that contrary to claims by the BJP, the demolition was "neither spontaneous nor unpreventable" and was the "zenith of a concerted and well laid out plan".

Also implicated were senior officials, both retired and serving, as well as organisers of the Hindu revivalist movement. The then BJP chief minister of Uttar Pradesh, the state where the mosque lay, was accused of posting bureaucrats and police officers he knew would not act to stop the violence.

The report said the "author" of the destruction was the Rashtriya Swayamsevak Sangh (RSS), a radical religious group that is the fountainhead of the Hindu nationalist movement. Both Advani and Vajpayee were RSS veterans, although once in office they distanced themselves from its radical Hindu-first agenda.

The government's opponents said the commission had bent to the prevailing political wind. The report was given to the government last June but had been kept secret. The report cleared the Congress government of 1992 of being negligent and letting the mosque be destroyed. Congress projects itself as a secular party that balances minority and majority rights.

He said: "I was there on the day and many BJP leaders had led people there. They cannot say they were not involved. But to anyone under 30 in India, about 500 million people, this is all irrelevant. India's moved on."