Teenage girls 'given drink and drugs by sex gang' 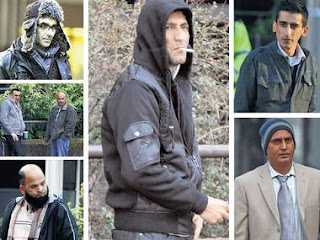 Five vulnerable teenage girls, including a 13-year-old, were given alcohol, drugs and takeaway food before being raped and "shared" by an organised gang over a two-year period, a court heard yesterday.

The victims, all from Rochdale, Greater Manchester, were attacked by "several" men in a single day sometimes several times a week, it was claimed. On the first day of a trial against 11 men at Liverpool Crown Court, the jury was told that the girls knew their attackers by nicknames such as "Master" and "Tiger".

They were subjected to violent exploitation at the hands of the defendants who took payments from other men in exchange for sexually assaulting them, it was claimed.

On some occasions it was alleged the victims were so incapacitated through alcohol or drugs that they were incapable of having any control over their actions. One of the victims then aged 13 became pregnant after having sex with one of the men and underwent an abortion. Another 16-year-old helped the gang to meet young girls, the court heard.

Opening the case for the prosecution Rachel Smith told the jury: "Some of you may find what you are about to hear distressing. The events and circumstances described by the girls are at best saddening and at worst shocking in places.

"No child should be exploited as these girls say they were." Among the victims was a 14-year-old girl who said she had "lost count" of the number of times she was attacked. On one occasion she told police she was plied with beer and spirits before being raped by a man while another watched and said: "I want a turn, I want a turn."

Miss Smith told the court: "They saw her being sick and each raped her. Afterwards they left and she cried herself to sleep."

Another victim, who was 15 when she met the defendants, told police that she was initially "flattered" by the attention of the gang. She said that she thought it meant that she was "attractive and they thought she was pretty" although she quickly became depressed and "incapable of getting herself out of the situation,"it was claimed.

Kabeer Hassan, 24, Abdul Aziz, 41, Abdul Rauf, 43, Mohammed Sajid, 35, Adil Khan, 42, Abdul Qayyum, 43, Mohammed Amin, 44, Qamar Shahzad, 29, Liaquat Shah, 41, Hamid Safi, 22, and a 59-year-old man, who cannot be named for legal reasons, deny all charges against them. The court heard the men, all originally from Pakistan, were known to each other. Two worked in the Tasty Bites and the Balti House takeaways in the Heywood area of Rochdale while four others were employed by local taxi firms. One was a student and the other four were unemployed.

Miss Smith said the girls "were easy to identify, target and exploit for the sexual gratification of these men". All had difficult family backgrounds and one was in care. They played truant and spent their days drinking and smoking, she added.

The attacks took place between 2008 and 2009. One girl, who was 13 when the alleged abuse began, told police that the men she met were "friends" who looked after her.

The court heard that on one occasion the 59-year-old man met two girls at a takeaway. He demanded sex from one 15-year-old, saying: "It's part of the deal because I bought you vodka, you have to give me something." Miss Smith said the girl refused and he raped her. When the girl started crying, he said: "Don't cry, I love you."

It was claimed that around August 2008 Aziz "took over" from the 59-year-old and started taking girls to various locations where they would have sex with older men – including a flat in Rochdale.