The face of the Gujarat riots meets his 'saviour' 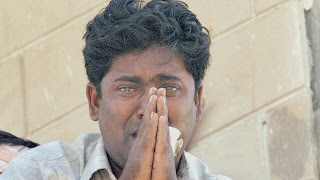 How does it feel, I ask World Press Photo award winning photographer Arko Datta, to meet the subject of his best-known picture for the first time?

Ten years ago, Arko's picture of a tailor named Qutubuddin Ansari became the face of religious riots which left nearly 1,000 people, mostly Muslims, dead in Gujarat.
In the picture, Mr Ansari, then 28 years old, is standing on a narrow veranda. He is wearing a light checked shirt stained with dried blood. His faintly bloodshot eyes are glazed with fear. His hands are folded in an expression of obeisance, hiding a mouth agape. It's a disturbing study of fear and helplessness.
"An Indian Muslim stranded in the first floor of his house, along with a few other Muslims and surrounded by a Hindu mob begs to the Rapid Action Force (Indian paramilitary) personnel to rescue him at Sone-ki-Chal in Ahmedabad, March 01, 2002," said the caption of the picture put out by Reuters news agency, for whom Arko worked at the time.

The Gujarat riots were among the worst in India since Independence. The Hindu nationalist BJP state government, led by Narendra Modi, was accused of not doing enough to bring the violence under control.
Memories
Ten years later, Arko and I are standing under the same veranda of an awkward looking two-storey building in a crowded lane, running alongside a busy highway in Ahmedabad, Gujarat's main city.
Next door, literally risen from the ashes, are a motorcycle showroom and a sooty garage. A rebuilt madrassah, which was gutted during the riots, is packed with cheery students.
A new flyover loops over the highway, offering the only change in a drab landscape of squat homes and grubby shops.
The photographer and his subject have just met. There has been a limp shaking of hands and both have hugged each other hesitantly. Arko told him how glad he was to see him. Mr Ansari had smiled shyly.
Now, Arko is telling us that the meeting is bringing back a lot of memories, some good, others bad.
The unchecked rioting had entered its second consecutive day when Arko and a bunch of fellow photographers found themselves outside the building where Mr Ansari was trapped on the morning of 1 March 2002.
Earlier they had hitched a ride with a van full of soldiers trying to bring the city under control.
When the van entered the highway before midday, Arko says, the sky was black with smoke from the fires and the road was strewn with bricks and stones. The military van moved with its headlights on.
"It was darkness at noon. There was frenzy all around. The city had gone mad."
Mobs armed with swords and stones from Hindu neighbourhoods across the highway were crossing over and attacking and setting fire to Muslim shops and homes on the other side. People watched this grisly show from their homes across the road.
The van sputtered on past the building where Mr Ansari stood when Arko looked back for a moment and saw his subject for the first time. He looked through the telephoto lens, and clicked, "three or four shots possibly, all in a fraction of a second".

Then he turned around and asked the soldiers to stop the van.
"Looking through the fog of smoke, we spotted the group of people trapped on the balcony of a burning house. We told the soldiers that we were not moving until they rescued them," says Arko.
I pick up the rest of the story from Mr Ansari, who is listening carefully. A curious crowd collects around us.
"We were trapped on the first floor for over a day, and we couldn't go down because fire was raging below.

"And when I saw the military van pass by, I thought, 'This is our last chance'. I began shouting Sahib! Sahib! to the soldiers and folded my hands, and when I did that they looked back and returned," he says.
A few soldiers were immediately positioned outside the house, and later in the day, as the fires below ebbed, Mr Ansari and his friends came down a stairwell built outside the house.
Next morning, Arko's picture of Mr Ansari had made it to the front pages of newspapers around the world. They called it "the defining image of the Gujarat carnage".
The problem was Mr Ansari didn't even know about it until a week later, when a foreign journalist hunted him down in a relief camp for riot victims, carrying a newspaper with the picture across an entire page.

"Then my life went into a tailspin. The picture followed me wherever I went. It haunted me, and drove me out of my job, and my state," he says.
He ran away to Malegaon in neighbouring Maharashtra to live with his sisters and had been working there for a fortnight when a co-worker walked into the shop with a newspaper carrying his picture. His boss didn't want any trouble and fired him immediately.
Next year, he left for Calcutta, but returned after a few months when he heard that his mother had a heart problem.
Over the next few years, Mr Ansari lost half-a-dozen jobs as people recognised him and journalists hounded him relentlessly. Political parties used the picture to woo Muslim votes. A group blamed for dozens of bomb attacks across India used the picture in an e-mail claiming to have carried out an attack. Muslim organisations freely put out adverts using the picture.

The picture brought a few happier moments. The owner of a clothes shop in Calcutta recognised him and gave him a discount on a T-shirt. An officer pulled him out of a queue for picking up papers to vaccinate his mother for her trip to Saudi Arabia for Haj, arranged for her inoculation quickly, and remained in touch with him. A resident of Poona wrote to him, giving him all his contacts and asking him to get in touch with him if he ever needed any help.
"I feel very bad, very sorry to hear that my pictures caused so much problems for you. I apologise," Arko tells Mr Ansari, as we settle down in his home in a slum, not far away from the house with the veranda.

Mr Ansari is sitting opposite him, and his eyes drop to the floor for a moment.
"Nobody is to blame, brother," he tells Arko. "You did your job. I was doing mine, trying to save my life. Your picture showed the world what was happening here. What happened to me eventually was kismet, destiny."
"And as things stand, my life is on the mend. I have a beautiful family, I have work, I have my own little home."

A few years ago, Mr Ansari bought a two-room tenement with a small tailoring shop for 315,000 rupees ($6,400; £4,000) from his paltry savings and loans from friends and family. It is a modest home with a raised bed, a television, a few utensils, a shiny red refrigerator and a washing machine tucked away behind a curtain. Upstairs, he and his co-workers stitch more 100 shirts a week, and he earns up to 7,000 rupees ($142; £90) a month.
Moving on
His family has grown to include an eight-year-old son and a four-year-old daughter. The eldest daughter is now 14 and wants to become a teacher.
Arko has also moved on - he quit Reuters after nearly a decade of rich work, including covering the wars in Afghanistan and Iraq, and began a photography school in the city of Mumbai.
Now Arko tells Mr Ansari of a personal tragedy that marked his coverage of the riots.
He says he was sent to cover the riots even as his mother was in the last stages of cancer. His wife had called him every day during the time he was taking pictures of the mayhem, imploring him to return to be by his mother's bedside.
"By the time I returned, she had slipped into a coma. I never got to speak to her. Three or four days later, she died. I have no siblings, and my father died when I was one. And I couldn't even exchange a last few words with my mum," he says.
Silence descends on the room.
Then Mr Ansari speaks.

"I can understand your pain. Allah sent you to save us, brother. You did a greater good," he says.
One event, two lives, both bookended by personal tragedies.
"It feels strange. I have mixed feelings," Arko says, as we take leave.
"On one hand, Qutubuddin was empowered by my picture. On the other, he lost his privacy and a bit of his life."
"I just hope he remembers me as a friend. We met as strangers as I think we parted as friends."
"I now want to remember him as a smiling, happy man. Not the frightened man on the balcony."
source
Posted by Zafar Khan at 10:00