From a child tutored by eunuchs to a Quran teacher: The story of Jameela 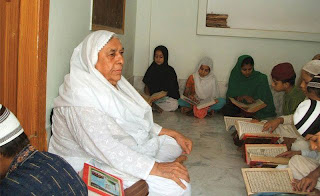 Jameela, born a transgender in 1941, has never felt comfortable in her entourage in Pakistan.

Her mother died when she was four years old, and her father sent her to live with her stepmother in Karachi.
At her all-girl middle school, Jameela was constantly teased for her looks and style.

So when a eunuch named Pasham Fakir came to her house and asked her stepmother to hand her over to him, and despite being refused, Jameela went without telling anyone.

Pasham took the 10-year-old girl to his house in Garhi Yaseen near Shikarpur where she began her ‘training’ as a eunuch.

Jameela recalled that period to The Express Tribune newspaper in Pakistan: “I lived with him for three years but I wanted to get away because I didn’t like his company. Luckily, the fakir (spiritual guru) took me to Hazrat Shah Abdul Latif Bhittai’s shrine for the annual Urs celebrations, where eunuchs come together from every part of the country.”

This is where Jameela met her new guru, Fakir Ameer Zadi, also known as Saboo, who adopted her after paying Rs5,000 to Pasham.
Saboo took Jameela to Sukkur. With his permission, Jameela purchased a house at Takkar Muhalla in 1970.

One day, Jameela learned from the newspaper that her brother had been killed in a robbery. “His death was a turning point in my life. A female neighbor taught me how to read the Holy Quran. With Allah’s grace, things just fell into place for me after this,” she told Sarfaraz Memon from the Express Tribune.

Jameela began teaching her neighbor’s child the Quran and soon the number of students grew day by day.

Today, she has a total of 450 students, who she teaches in seven different shifts without any charge, reported the Express Tribune. “A student’s mother sends Jameela two meals a day and offers to wash and iron her clothes. Since she teaches her students free of charge, their parents give her money and clothes as gifts. Jameela said she was lucky enough to perform Hajj four times and Umrah once,” writes Memon.

“Allah created me the way I am, but nowadays being a eunuch has become a profession,” she said with regret, adding, “teenage boys turn into fake eunuchs by taking hormonal injections and this is a big sin” she said.

Jameela’s story raises many concerns about the conditions, rights and treatment of sexual minorities in Pakistan.

In a recent article published in The Nation, Shahnaz Khan wrote that eunuchs “are one of the most marginalized groups, not only ostracized by society, but also abandoned by their own parents at a young age.
Under these circumstances, recent news of the Supreme Court taking notice of this situation gives some hope that their lot is about to change. Chief Justice Iftikhar Muhammad Chaudhry has directed that the department that handles national identity cards, NADRA, create a column on the registration card where they can list their sex as she-male. Also, parents abandoning transgender children and gurus forcing them into prostitution will face criminal charges."

Last year, Reuters reports that orders went out from the Supreme Court to the Election Commission of Pakistan (ECP) to enroll eunuchs as voters, a development that accords the basic right to a much mistreated community. It is estimated there are between 80,000 and 300,000 members of the transgender community, locally referred to as hijras, in Pakistan.
source
Posted by Zafar Khan at 10:00