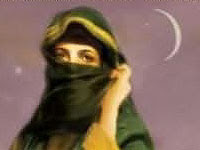 Ruqayyah is the second daughter born to Prophet Mohammed ﷺ and Lady Khadejah (RA). She and Um Kulthoom, the third daughter, were very close as Zainab was a bit older than them and Fatima was much younger. These two sisters grew up as if they were twins and shared almost everything.

Ruqayyah and Um Kulthoom got engaged at the same time to brothers, who just happened to be the sons of Abu Lahab. Abu Talib, the Prophet’s ﷺ uncle, came to him and asked for his daughters’ hand in marriage on behalf of Abu Lahab. Prophet Mohammed ﷺ asked him for some time so that he can go ask his daughters. They had a small family meeting with the girls and Khadejah (RA), who was hesitant because she knew how heartless and cruel Abu Lahab’s wife was and didn’t want her to be the mother in law to her daughters. Nevertheless, they all agreed to the proposal and the marriage contracts were signed in an environment of extreme anxiety on everyone’s behalf.
Soon afterwards, the Prophethood descended upon Mohammed ﷺ and everything changed for them. Khadejah (RA) became even more worried about the fate of her daughters as Abu Lahab and his wife started to show extreme cruelty to the Muslims. However, fate worked in their favor when Abu Lahab, in order to punish Mohammed ﷺ, ordered his sons to break off the marriage (which had not yet become official) to Mohammed’s ﷺ daughters. The girls went home to their parents in great distress.
However, the disbelievers did not get the satisfaction they were looking for because Mohammed ﷺ taught his daughters that everything happens for a reason and there is something good that will come out of a bad situation. So the entire family took it really well and put their trust in God.
Sure enough, someone great did come along by the name of Uthman ibn Affan, one of the most dignified, gracious, righteous, bashful, noble, wealthy men of all of Quraysh. Uthman was very well known in Quraysh for his lineage and wealth but he was also the most loved man. He was so loved, that the mothers in Quraysh would sing a lullaby to their children that went, “By Allah, I love you, as the Quraysh love Uthman.”

There was once a story reported by Az-Zubayr that the Prophet ﷺ had sent a man with a gift to Uthman and Ruqayyah and the man came back late. The Prophet ﷺ told him, “Do you want me to inform you about what delayed you?” The man nodded. “You stood there looking at Uthman and Ruqayyah, admiring their beauty,” replied the Prophet ﷺ.
When the persecution of the Muslims started to get too intense, Prophet Mohammed ﷺ allowed whoever could to migrate to Abbysinia where there was a king who would protect them and wouldn’t allow anyone to be wronged in his presence. This king was Negus. Uthman and Ruqayyah were among those who decided to migrate but Ruqayyah found it so hard to say goodbye to her family and was crying and scared.
The trip to Abysinnia was long and difficult. They had to go through two deserts, a deep sea and the African jungles, all in the scorching heat. First they went from Mecca to the Jeddah coast where they boarded a ship that took them to the Abbysinian coast. From then, they traveled inland until they reached palace of the king and informed him of their migration to his land.
Back in Mecca, it wasn’t long before the Quraysh found out about the migration and sent some delegates who knew the king with gifts to persuade him to turn the migraters over to them. Once the delegates arrived though, there was nothing they could say to convince the king to surrender the refugees. So one of the delegates claimed that these people were saying negative things about Jesus and Mary. This made the king angry and he sent guards to the Muslim camp to bring them to the palace.

The Muslims became very worried that they were summoned but Ja’far stood up and said that he will speak on everyone’s behalf. The king questioned Ja’far about leaving the religion of their forefathers. Ja’far answered that they were people that lived in ignorance and corruption until Mohammed ﷺ came among them and brought light and commanded them to worship Allah. Then the king asked them what they say about Jesus and Mary. Ja’far answered that they believe that Jesus was a messenger of God and recited the first few verses of Soorat Maryam. Upon hearing this, the king declared that he would never turn these people over to Quraysh. The delegates tried appealing to the king through other church members but they were not successful and went home empty handed.

The Muslims lived in Abbysinia for months and some of them years. They took up jobs according to their professions and were not a burden on the king or his people. There were times of stress, like when the king almost got overthrown by his nephew who hated the Muslims, but overall, the time they spent there was peaceful. However, they were all still thinking about home, and none more than Ruqayyah, who was yearning to see her sisters and parents. Then news came that Hamza and Umar bin Al Khattab had accepted Islam and some saw this as a good time to come home. They thought surely if these two great men had become Muslims then they would be safe. Ruqqayah and Uthman were among the first group to leave Abbysinia.
When they arrived in Mecca, they were disappointed and stunned to see the extent at which the brutality against the Muslims had gotten. Ruqqayah immediately went to her family’s house and kissed her sisters and father. She then asked about her mother only to learn that she had passed away while Ruqqayah was in Abbysinia. This broke her heart and she wept profusely. She prayed for her mother and resigned her fate to Allah.

It was not long before Ruqqayah became pregnant and gave birth to a boy, Abdullah. The baby filled their life with joy after so much hardship and sorrow. When Abdullah was two years old, Ruqqayah, Uthman joined those that migrated to Madinah.
However, as all believers go through trials, Ruqayyah was about to endure another very difficult trial.
{Who has created death and life, that He may test you [to see] which of you is best in deed} [Quran 67:2]

One day Abdullah was sleeping in his cradle when a rooster pecked him in the eyes. This led to an infection that claimed his life a few days later. Ruqqayah was so distraught by the death of her son that she became very ill. Uthman lovingly and affectionately stood by her and took care of her while she was sick, but eventually she passed away. As Uthman was kissing her forehead, the announcement was made in the city of the Muslim’s victory in the battle of Badr.
Prophet Mohammed ﷺ came back stunned to find his daughter dead. He and Fatima wept for her and stood by consoling each other and Uthman.
The Prophet ﷺ sorrowfully performed the funeral prayers. He returned to his home after burying his daughter carrying his struggle with him and continued to deliver his message. Uthman later married Um Kulthoom because she was so close in character to Ruqqayah. May Allah be pleased with all of them.
source
Posted by Zafar Khan at 10:00