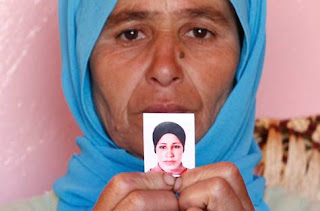 Morocco: Escape for 16-year-old Amina Filali from her marriage came in the form of a pill of rat poison she bought in the market for 60 cents.
Pressured by a conservative rural Moroccan society, a judge and her own mother to marry the man she said had raped her at 15 and then abused her for the rest of her marriage, she could only see one way out: Suicide.

"I had to marry her to him, because I couldn't allow my daughter to have no future and stay unmarried," said her mother Zohra in an interview with The Associated Press in their tiny village in northern Morocco, a week after her daughter killed herself.
The Justice Ministry suggests Filali was consenting and not a victim. But her death has called attention to - and prompted outrage over - an article in the penal code absolving the perpetrator of the rape of a minor if he marries the victim.

Activists and social workers are calling for its repeal. On Saturday in front of parliament in the capital Rabat, some 300 people waved signs and chanted slogans calling for a revised penal code that specifically outlaws violence against women.
Zohra Filali said she found her daughter being attacked in the forest after hearing she had been waylaid by a man with a knife. She immediately took her daughter to the family home of the man, who was 10 years older, and demanded they marry.
In many conservative societies, a family's honour rests with the women and intercourse outside of wedlock brings a deep shame that can only be remedied with the girl's marriage.

The practice dates back to the Old Testament and takes place in conservative or tribal parts in the Muslim world, such as Afghanistan.
In the story told by Amina's parents, it becomes clear that the mother was the primary force behind her daughter's marriage, which was then sanctioned by a judge and the law which permits underage marriages to "resolve" rape cases.
Morocco updated its family code in 2004 in a landmark improvement of the situation of women, but activists say there's still room for improvement. In cases of rape, the burden of proof is often on the victim and if she can't prove she was attacked, a woman risks being prosecuted for debauchery.
The French version of Article 475 of the 1962 penal code says that the "kidnapper" - a term that can refer to an attacker or rapist - of a minor cannot be prosecuted if he marries his victim.

The Arabic version refers to the one who "kidnaps or deceives" a minor. Whatever the wording, the article is cited in justifying the minor's marriage.
An online petition calling for a change to the law has garnered about 3,500 signatures and a protest was held on Thursday in front of the courthouse of the nearby town of Larache.

After at first remaining silent about the case, the Justice Ministry issued a statement Friday saying the judge acted correctly and followed the law in accordance with the wishes of both families and the victim.
"The victim had relations with the man who (later) married her during which she lost her virginity with her consent," said the statement, which did not address concerns about the nature of consent between a 15 and a 25-year-old.
The parents, poor farmers in Morocco's fertile coastal region, maintain Amina was raped. The Associated Press generally doesn't generally identify alleged victims of sexual abuse, but in this case her family agreed that she could be identified.
Amina's husband and his family could not be reached for comment on what happened to her. When the family of the man at first refused to marry Amina, her mother took her to a doctor to get a medical certificate saying she had been raped.
The doctor informed Zohra that her daughter had lost her virginity earlier and did not confirm that a rape had occurred. "She finally told me that he had first raped her more than a month ago," the mother said.

Regardless of how it happened, said her mother, a small woman in a light blue headscarf who kept her eyes downcast until the subject of the family honour came up, her daughter had to marry or her life would be over.
"We would be the laughingstock of our neighbors," she said, with a rising voice, her eyes flashing fiercely. The societal pressures on young women are fierce in rural Morocco, where an estimated two-thirds of women are illiterate.
In this village alone, four young women have attempted suicide, according to the local chapter of the Moroccan Association for Human Rights. Two were successful, including an unwed pregnant teenager who also took rat poison.
"Women are the first victims of people's social and economic situation," said Fathiya Al Yaakoubi of the AMDH, as the human rights group is known by its French initials.

"Poverty pushes families to marry off their underage girls." She also holds the state responsible for allowing these underage marriages to take place, despite an official minimum age of 18.
Amina's father, Lahcen, was finally informed of the attack on his daughter and he went first to the nearby town of Larache and then north to the port city of Tangiers seeking justice.
There he said the prosecutor pushed them to marry his daughter to the man, whose family had finally agreed to the match, in the face of his imminent prosecution.
"I was against the marriage from the beginning, but when the state wanted to marry them, what could I do against the will of the state," said Lahcen, who has six other children ages ranging from 5 to 23.

He said at first he refused to do the paperwork, but said his wife pushed for it to be completed. "The law allowing judges the authority to allow marriage in the case of rape has to be canceled," said Al Yaakoubi, the activist.
"Marriage is not the solution for a rape, which is a crime that should be punished."
According to the mother, the forced marriage did not go well, as neither the groom nor his family, also quite poor, welcomed the new addition. Amina lived with her unemployed husband in a small shack next to his family's home and was reportedly beaten regularly by him and his mother.
"She came home a lot because she was scared and she said they hit her," said Zohra Filali about her daughter, her composure cracking as she told the story. "I didn't tell my husband because I was hoping it would improve."
It didn't and on March 10, three and a half months after a judge authorised the marriage, Amina poisoned herself. She lingered in the hospital for several hours and the last time her mother saw her was through a glass window when she said she was feeling better and asked for a yogurt.

Three hours later she was dead. Amina is buried on a simple hilltop cemetery of white tombstones. Her grave is marked by a cairn of stones covered with palm fronds with a view of the beautiful rolling hills and nearby forest.
On Friday, the Muslim day of prayer, her family recited the opening verse of the Quran over her grave, breaking into tears. "I thought she would have no future, no marriage, but now it would have been better if she had just stayed home," her mother said.
source
Posted by Zafar Khan at 10:08